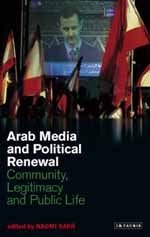 Will satellite media save the Arab world from authoritarianism? Might Al Jazeera, Nancy Ajram and Amer Khaled lead their rapt audience to a democratic future? In the decade since Al Jazeera catapulted pan-Arab media into the international spotlight, scholars, journalists and politicians alike have indulged in posing these questions and frequently answer them in the affirmative. Doing so is optimistic, and terribly fashionable.

Naomi Sakr, editor of Arab Media and Political Renewal: Community, Legitimacy and Public Life, opens her introduction to the volume by articulating the shortcomings in this relatively nascent field of inquiry: namely, the dearth of empirical research and the resultant positivist assumptions about media’s influence on hearts, minds and politics. Sakr, a Reader in Communication at the University of Westminster, claims that this new collection combats these increasingly entrenched truisms by experimenting with “audience research,” in an effort to produce a legitimately Geertzian “thick description.”

While revisionist sentiments of this kind are far from novel – Abu-Lughod pioneered such work in this sub-field – Sakr correctly diagnoses the clichéd state of Arab media studies. Unfortunately, while many contributors present fresh ethnographic research and the articles’ apposite chronology makes for stimulating intertextual play, their weak arguments, inconclusive results and poor editing undermine the collection as a whole.

The volume tackles the question of whether the media have produced a Habermasian “public sphere” in the Arab world, opening with Oliver Hahn’s discussion of Habermas’ definition: a coalescing of society with the freedom to engage in “dialogic critical-rational discourse” (16).  Hahn roundly denies that such a sphere has taken root in the Arab world, basing his claim on the support of four books on Arab media (including two devoted to Al Jazeera) and thus relying solely on secondary sources for his analysis. He quotes at length from Mohammad Zayani’s Arab Satellite Media but fails to engage with the author’s brash declaration that public opinion is “alien to the region,” and that Arabs accept government censorship of media because of the word’s more positive connotations in Islam. True, many Arabs are socially conservative. But authoritarian governments do not focus their efforts on suppressing the proliferation of the music videos that offend their values; rather they target coverage of political opposition. Hahn, however, uncritically accepts Zayani’s reasoning and misses an opportunity to boost his credibility by dissecting such general declarations.

Only Dina Matar’s theory-heavy article on Al Jazeera’s influence on Palestinians in London firmly traces pluralistic, pan-Arab news coverage to increased political activism. And of course, these Palestinians enjoy the advantage of living in a democratic society that allows them to express their newfound “Palestinian-ness” to their hearts’ content. As the other articles show, the ramifications of this media “success” have not been proven to extend to the Arab world proper.

Lina Khatib analyzes the “Beirut Spring” of 2005 to demonstrate television’s potential to mobilize the public. Although she exaggerates the phenomenon’s significance in claiming that “the public protests were a first in the Arab world,” she correctly draws attention to television’s power to magnify events (36). Albrecht Hofheinz suggests that the availability of information on the internet may lead to increased political consciousness, but gives no evidence that this has happened yet. Marwan Kraidy is the most optimistic about TV’s democratizing potential. He contends that Star Academy, the Lebanese version of American Idol, created an Arab public space because the show’s language and imagery became a “centre of intertextual references that most Arabs recognize” (55). Undoubtedly. But Kraidy does not go into detail about what this “language” comprises: is it truly political, or merely a shared lexicon of slogans? This difference matters, because his implication that the “language” learned by viewers of reality TV translates directly into political consciousness, to say nothing of political activism, is naïve without the support of empirical evidence.

Simplistic arguments destabilize the collection throughout while poor editing weakens the collection’s integrity. Matar includes the same block quote twice in three pages, and even less forgivably attributes it to two different interviewees (pgs. 128 and 131). Different transliterations of the same Arabic words appear on the same page, and such tiresome mistakes as “forums” and “emphasises” make reading arduous at times. Tarik Sabry wields the weary contention that “deficits in Arab reason” have prevented the establishment of a public sphere: namely, that the intellectuals’ rejection of popular culture in favor of Islamic tradition has undermined progress toward a free society (155). He suggests that the development of an indigenous field of “Arab cultural studies” would alleviate this breach. A nice idea, but if instigating social change from the towers of academia works, the whole world should know about it. Giovanna Maiola and David Ward present an impressive collection of quantitative research, often lacking in this field, comparing local and international coverage of the 2005 Palestinian elections. However, the chapter’s penultimate sentence reveals their conclusion that ”Al Jazeera’s coverage focused on a wider range of issues than that of its local counterparts” (117), hardly a groundbreaking observation though it demonstrates that perhaps the Arab media is not so “exceptional” as pundits like to believe since this pattern of greater breadth among transnational channels has been observed throughout the Western media as well.

This observation is taken up indirectly by Imad Karam, who makes one of the few convincing and useful arguments of the book. He touches on a point that others have ignored: the worldview offered by satellite media is one-dimensional. Channels like Al Jazeera focus on international politics and ignore local and national issues that have a more direct bearing on viewers’ lives such as unemployment, poverty or health care. These programs therefore hardly encourage democratic behavior but rather fill viewers’ heads with sensational disasters to dwarf their own suffering (82-3).  Accordingly, Karam’s fieldwork reveals that Arab youth turn to TV not for political guidance but merely to escape their troubled lives. Excerpts from interviews corroborate Karam’s view that satellite news programming has not created an Arab “public sphere.” Rather than engaging in the public sphere and politics, Arab youth feel emasculated and ignored, alienated by the exclusive domination of politics and power by a corrupt older generation.

Karam contrasts this failure with entertainment media, which has executed a brilliant capture of youthful hearts and minds (as Kraidy’s chapter illustrates). Sports and music channels with glamorous anchors encourage youth to vote for their favorite stars, to have a “voice.” In the context of their countries’ suffocating political climates, entertainment television provides youth with, in the words of one of Karam’s respondents, “breathing space.” Enthusiasm for such channels as “Melody Hits” or “Rotana Cinema” does not translate however into interest in more serious programming, much less political involvement, he argues in contrast to Kraidy.

Bruce Stanley’s chapter is a refreshingly astute explanation of why Western media intervention as a peace-building strategy has failed in the Arab World: donors have focused on promoting dialogue and understanding at the expense of functional political education that might lead to real societal transformation (149).  The reallocation of funds and energies that he suggests, e.g. toward more aggressive educational and formative programming, may well shake up the stagnant political landscape in ways that the current satellite media cannot. Of course, that this intervention would come from the West does not bode well for its reception.

Taken collectively, the “audience studies” proposed by Sakr should disabuse optimists of the assumption that Arab media has or will eventually galvanize its oppressed audience into political action. Moreover, bearing in mind the kaleidoscope of local complexity hinted at by Kraidy and others, it seems unlikely that the study of pan-Arab media in isolation will uncover the secret to solving the region’s political stalemate. Sharing media does not automatically lead to sharing a political cause. Shortcomings aside, Arab and Political Renewal attests to that quite clearly. So for now, the maxim “misery loves company” best explains the pan-Arab media phenomenon. And if that company happens to be Nancy Ajram, so much the better.

After a year in Cairo at American University in Cairo’s Center for Arabic Study Abroad, Anna Swank is completing a Master’s degree in Near Eastern Studies at New York University, where she is researching political societies in Egypt in the lead-up to World War One.