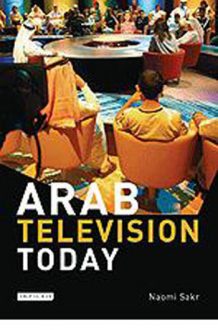 The author encourages the reader to treat this text as a sequel to her previous work on television in the , Satellite Realms.  Read either as a sequel or on its own, the book is an excellent contribution to the study of television in the Arab World.  Sakr brings a deep and sophisticated industry expertise to analyze the political economy of contemporary Arab television, asking whether the rapid growth and increasing complexity of the industry reflects redistributions of political power and resources or in fact conceals resistance to such change (pg. 14).   The book weaves together analysis of television content, television ownership, telecommunications regulation, and, importantly, the development of the Arab audience as a consumer of programming.

One of the book’s salient features is that its discussion is grounded in specific country cases.  The second chapter reveals how ruling elites have attempted to retain and broaden their power bases by controlling media licensing.  Despite liberalization measures in countries such as Jordan, Tunisia, Oman and Morocco, the dominant practice within the region is for regimes to grant licenses to trusted associates, thus maintaining influence, if not direct control over media ownership and content.

The limited expansion of the industry has been partly responsible for the transition away from the traditional models and practices of Arab television.  Parallel to the trends of limited private ownership and industry expansion, journalists in the region have begun to overcome the traditional ‘top-down’ and slogan-laden journalism characteristic of the pre-satellite era and provide “new-style” journalism that aims at fostering more critical capacities among viewers.  The discussion of internal and external influences on Arab journalism is informed by interviews with journalists and industry professionals, who highlight this transition and the conflicting influences on Arab journalists who seek to deliver more nuanced coverage.

The transition towards a post-satellite television era has witnessed a parallel increase in the level of access women enjoy as both producers and consumers of television.  Sakr’s analysis of the role of women in the television industry asks if social advancement can be achieved through television (Chapter 4).  The treatment of this question leads her to conclude that the “female presence in television is not a reliable indicator of women’s representation in other areas of public life” (pg. 105).  Expanding on this, Sakr argues that the presence of many women on screen may actually have the reverse effect of masking women’s absence from other areas of public life.  This conclusion must also be understood within the context of how women are de-legitimized as producers of news.  For example, Sakr marshals evidence to argue that women are seen as either pleasurable to look at or as combatants, both of which are constructions that restrict the legitimacy of women, in the eyes of many, to comment and debate serious issues.

The reader is reminded of the nascency of the Arab television market during Sakr’s discussion of programming decision-making (Chapter 5).  It becomes clear in this chapter that despite the large size of the Arab television market, decision-makers remain wedded to ‘safe’ programming.  Practically speaking, this has meant an over-reliance on importing foreign language programs and formats that are subsequently Arabized.  The most popular forms of imported shows are game shows, considered the safest of the formats.  The emphasis on content is carried into the sixth chapter that focuses on news, sports and talk television.  The lack of profitability of these three genres has meant that emerging business models emphasize diversity and long-term planning to sustain what is an important, if not yet profitable, market.

The concluding chapter (Chapter 7) maintains the focus on the business models and strategies of television companies.  What is most interesting in this chapter is not merely the discussion of business strategies but Sakr’s return to the focus on the relationship between regime elites and the Arab television industry.  Here, we are reminded that – despite the appearance of plurality – elites connected to domestic regimes maintain a powerful monopoly on the political and economic control of the industry.

Alternating between analysis of the broader legal, economic and institutional facets of the television industry on one hand, and the programming and content of specific shows and channels on the other, is the greatest strength of the book.  It provides a fascinating perspective on the industry and makes use of Sakr’s access to leading producers and decision-makers in the industry.  Another strength is Sakr’s ability to identify the major figures controlling ownership of media outlets.  This is valuable in demonstrating the multiple influences on the production of television, and indeed the very politics of individual stations.  Throughout, Sakr integrates the facets of the Arab television industry – ownership, regulation, content, viewership, and advertising – into a coherent and accessible analysis.

The weaknesses of the text are minimal, although a more sustained discussion of how Arab youth impact the television industry might have increased the book’s insight into future trends.  Nevertheless, this is a must read for anyone interested in the political economy of the Arab television industry.

Youssef Masrieh is a postgraduate student at the .