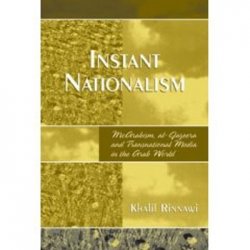 Scholarship on Middle Eastern media has increased in the last ten years, particularly focusing on the rise of satellite television and the public sphere. This book joins the growing literature on the political analysis of media impacts, arguing that from a mix of globalization and identity politics a new public sphere has emerged in the Arab World.  The aim of the book is to track the production of that mass produced regional identity, coined by the author as McArabism.  Rinnawi details the development of specific media actors, Al-Jazeera as the public face of the new identity force, and the resultant shift in state controlled media outlets. The book offers a wealth of information on state media and new Arab satellite stations (Chapters Three and Four); classifications of satellite television stations according to ownership, business model, content, and satellite platforms (Chapter Four); recent histories of regulation battles with state actors (Chapter Five); and a case study of media content on Al-Jazeera in comparison with CNN and state-owned and operated Jordan TV (Chapter Six).

Rinnawi responds to theoretical debates in media studies about globalization and political analyses of the development of a pan-Arab public sphere. He advocates, along the lines of Benjamin Barber’s Jihad vs. McWorld (1992), that the tensions between local tribal identities and global consumer conformity are manifest in a re-imagined pan-Arab identity, which he titles McArabism. McArabism draws upon the homogenizing tendencies of regional identity constructions, through content and format imitations of Western media (news and entertainment) outlets, to refashion the orientations of local Arab-Islamic viewers. In contrast to what he terms tribal media—state owned and operated media in the service of national interests—new media technologies transgress territorial boundaries, are commercially driven, and allow for a greater range of alternative voices to be heard. The mechanisms used by the new media to generate a regional public sphere include an emphasis on emotive news reporting, a shared stance by media professionals on issues such as the Palestinian-Israeli conflict and the Iraq war, new reporting styles than engage the voices of ordinary people on location, entertainment programming aimed for a regional rather than local market, and utilizing Modern Standard Arabic rather than dialects to emphasize shared history and culture.

Rinawwi’s style and arguments are easy to follow but not always fully supported. Though he begins with a caveat that citation has been kept to a minimum to aid the flow of his writing, there are moments when he is making his strongest points that support for assertions would have strengthened his position. This is particularly true when in Chapter Two he discusses the processes and mechanisms of McArabism, the “glocalization” development by which a Middle East regional public sphere emerges in response to tensions between homogenizing commercial interests and ethnic sensibilities. The examples of cultural production illustrating his points are anecdotal and analysis presented in the authoritative voice of the researcher. As a reader I was left wanting more data or research to support the tentative regional identity he forcefully argues the existence of.

Instant Nationalism provides a view of media professionals’ ideologies and their impact on production values, by reproducing generalizations about audience reception. The trope of tribal media used to describe state media systems prior to Al-Jazeera evokes a long-standing metonym of power relations lacking the nuance of shifting alliances over time. It distracts from an otherwise well-researched argument about state adaptations to new technologies. In addition, by reducing identity processes to dichotomizing tendencies (global vs. local) there is little room for allowing audiences the ability to choose along a continuum of identity constructions based on the context and content of discussion. Clearly there are complex identity processes at work in the , but by focusing primarily on media production and content analysis, Rinnawi’s data reflects elite perceptions (including other media scholars) rather than ordinary reactions and identity formation mechanisms. Of course, he recognizes the paucity and difficulty of regional audience ratings statistics.

However, Rinnawi’s basic argument is for a new regional public identity that re-imagines Arab and Islamic symbolism with little reference to audience reception work. In addition, the author dismisses Gulf and North African Arab-Islamic audiences, arguing that they do not share in the same regional identity processes as Egyptian and Levantine Arabs due to their categorization as imperial states, despite shared symbolic resources and concerns with neo-colonial cultural and economic incursions. A focus on Egypt and the Levant media professionals’ orientation to the new pan-Arabism, due to their proximity to prior Nasserism and new Islamist actors such as Hizbullah and Hamas, seems to drive this exclusion.

By using macro analysis and station synecdoche to explain regional processes, Rinnawi’s otherwise detailed analysis is stretched. His case study of Al-Jazeera content presentation is a useful exploration of producer positionality and orientations and the transition from state media monopolies to regional consumption markets. Instant Nationalism contains a wealth of material and a useful set of questions to be explored in further studies of transnational media in the and the shaping of regional public perception and political action.

Becky Schulthies is a Doctoral Candidate at the University of Arizona in Linguistic Anthropology and a Visiting Instructor at Brigham Young University.