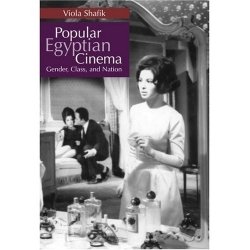 Viola Shafik’s Popular Egyptian Cinema: Gender, Class, and Nation is a follow-up to her survey of Arab cinema first released in 1998.  Unlike her earlier work, Popular Egyptian Cinema focuses its lens on films between the 1920s and present day. The text is divided into three sections. The first deals with representation of minorities in Egyptian film, namely Jews, Copts, and Nubians. Minorities are discussed in the context of how they have been folded into or excluded from notions of nationhood. The second part deals with several binary themes dominating representation of gender, and especially women, in film. Lastly, part three deals with how audiences from different classes interpret films, and the spaces in which they are presented.

The three parts illustrate the shifting nature of nationhood as depicted through Egyptian film. Shafik points out that study of Egyptian cinema is significant to Middle East studies particularly because of the prominence the industry has had throughout the region. Engaging in the study as a means to look specifically at Egyptian society develops an account of a nation that has negotiated its identity in response to the shocks of historical events in the twentieth and early twenty-first centuries. Colonialism, independence, wars, economic reforms and regional conflicts have all left major marks on Egyptians.  Shafik shows that cinema has enabled filmmakers and viewers to go through cathartic exercises to express dissatisfaction, grief, imaginary empowerment and solidarity, and argues that this artistic channel is especially important because Egypt lacks an adequate civil society.

Overall, the section on gender stands out as the strongest and makes the greatest contribution to the field of cinema studies. Feminist film theory, coupled with historical analyses of genre, inform the author’s scholarship on gender representations, as does the study of film criticism and production. Looking at changing conceptions of genre through time, Shafik contextualizes the socio-political developments that have shaped cinematic representations. Her analysis reaches back to the period of British control, where she shows that Victorian colonial influences helped give form to representations of women as passive and weak. Shafik argues that traditional Arab and Islamic models gave greater credence to the power of women to cause fitna, or chaos. To support her argument she cites traditional literary modes in which women are depicted as beguiling, thus able to use their sexuality to achieve their aims. With so much misinformed criticism of Islam prevalent in the media today, Shafik's reasoned approach brings a much needed ballast to the discussion of women and Islam.

Another of her core assertions is that “genre” itself is a construction of ideology: on screen, genre is presented as one form but in fact societally represents another. Beginning in the 1950s, the traditional model of women as homemaker and educator of children was subordinated by the rhetoric of women's liberation. Shafik challenges this notion by parsing mainstream action and melodrama, as well as realism films produced during the first decades after the Free Officers coup and later. Her analysis demonstrates that women were not in fact liberated but instead switched from being portrayed as servants of the household to servants of the nation.

In one of her most incisive observations, Shafik shows that the role reversal was spurred most stridently by directors of realism films—those who championed a genre that purported to be high-brow, sensitive, and in support of progressive causes such as the struggles of the lower class and against the oppression of women. Some of the so-called low-brow films derided by critics were more likely to show rural and poor urban women in solidarity with one another. Shafik uses the tradition of zar, an Egyptian celebration most likely linked to ancient East African culture, to reveal how modern films sought to undermine the ritual. (148)  A source of empowerment and bonding for rural women, post-revolutionary films preaching secular enlightenment sought to show zar as a backward superstition that was a poor substitute for objective science.

The final section deals with spectators and cinema space but is the least developed and most understated part of the study. While giving occasional nods to the decline in cinema viewers and the concomitant reduction in film production over the last 20 years, Shafik appears to be reluctant to state just how marked the deterioration is. The moribund condition of the cinema industry, both in terms of the sagging conditions of its third-tier cinema spaces, now synonymous with seaminess, is a part of the changing nature of how ordinary people view their nation. No study can be exhaustive and Shafik prefaces her own work stating that hers was not meant to be. Yet the questions her final section leaves unasked but certainly not buried are worthy of further exploration. Perhaps her next study will delve into the diminished status of film as a new generation of Egyptian youth find and create alternative media platforms for viewing and expressing their contemporary lives.

Nesreen Khashan is a college lecturer, curriculum specialist and freelance writer living in Washington DC.  She is co-editor of Encounters with the Middle East: True Stories of People and Culture that Help You Understand the Region, released December 2007 by Solas House.