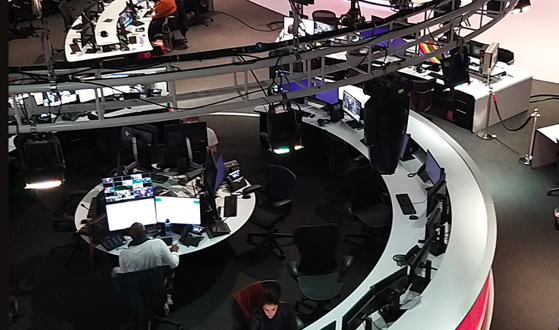 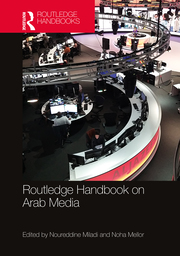 The Routledge Handbook on Arab Media is an encyclopedic depiction of the history, roles, models of ownership, and regulations of print, broadcast, and online media in 20 Arab countries out of the 22 Arab countries represented in the Arab League (the two Arab countries that were not covered in this handbook without clear reasons are Djibouti and Comoros Islands). It is a 38-chapter volume that examines how mass media and communication have evolved and intersected with politics and national security in those countries. A total of 43 media scholars (including the two editors of the handbook) authored the volume that introduced both traditional and online media in each Arab country in alphabetical order. The number of chapters allocated to each country ranged from one (as is the case for Bahrain, Kuwait, Libya, Mauritania, Oman, United Arab Emirates, and Yemen) to two (Algeria, Jordan, Lebanon, Palestine, Qatar, Somalia, Sudan, and Syria) or three (Egypt, Iraq, Morocco, Saudi Arabia, and Tunisia). However, the editors did not identify the rationale for this disproportionate allocation of chapters to each country.

Even though the editors mentioned in their introduction that this volume, “provides an overview of the historical development of news media in all Arab states,” it is more precise to report that this volume covers all genres of traditional media (not just “news media”) in “most” Arab states. The volume chronicles the adoption and penetration of the Internet and social media in those countries, excluding only Djibouti and Comoros Islands. Perhaps those two countries will be covered in the second edition of this handbook. The editors also made a sound decision of not using the term “Middle East” in the whole volume as it “was coined by the former imperial powers,” not to mention, this term refers to non-Arab states such as Iran and Pakistan. Additionally, it is both directional and opinionated, it locates this region according to how it is geographically perceived by one area. It becomes geographically inaccurate when countries in Southeast Asia use the same directionality by labeling that same region “the Middle East” when it is to the West of them!

Another distinct aspect of this volume is that it does not analyze Arab media as an “autonomous field” or isolate it from its surrounding historical and political contexts. Instead, it provides an episodic narrative about how successive colonialist and indigenous political and economic elites introduced and sought to control those media. The volume also recognizes the local context in each Arab state and links it to “the overall regional and transnational media scene.” In their reflective introduction, the editors identified four main themes that the authors of the chapters adopted in their analysis of Arab media in this volume: identity politics, rivalry with neighbors, national security, and digital transformation. These themes reveal how politics and media are intertwined in the Arab world. The chapters provide several examples of how both republican and monarchical Arab regimes controlled and employed mass media in disseminating and shaping national identity and extending their regional influence. The preservation of national security has always been a card played by Arab governments to curb press freedom. According to the editors of the volume, the “watchdog” model does not represent the history nor reality of media in the Arab region. Rather, the “interpellation” model, where those governments used mass media to craft a national identity and defend national interests, applies to the dynamics and paradigms of Arab media systems.

Several seminal works have documented the evolution of Arab media, such as Boyd’s Broadcasting in the Arab World and Rugh’s Arab Mass Media, but what sets Routledge Handbook of Arab Media apart is that it addresses the scarcity of in-depth research about the media industry in underrepresented Arab countries, such as Mauritania and Somalia. It also provides a more comprehensive approach that traces the evolving business models of media ownership in the Arab world and how Arab governments tweaked their media laws to maintain control over mass and online media even when they do not own those outlets. Yet, the editors recognize that there are some limitations in their volume. One of those limitations is that it does not examine the long and rich cinematic heritage of specific countries, such as Egypt, Tunisia, and Lebanon. Moreover, the volume ignores “Islamic journalism and media-related Islamist movements,” even though Islamic organizations, such as Lebanon’s Hezbollah, Egypt’s Muslim Brotherhood, and Morocco’s Party of Justice and Development have created and managed their own print and broadcast media for decades. However, the main limitation of this volume is the lack of a synthesis that illustrates the commonalities of the historical, economic, and legal paths of Arab media. The editors tried to create such a synthesis in their introduction but fell short of analyzing several commonalities and distinctions despite them being highlighted discretely throughout the 38 chapters of the volume.

One of the striking commonalities that characterize the emergence of mass media in several Arab states is the “colonizer’s initiative.” The introduction of print or broadcast media happened at the hands of either the French, Spanish, or British colonizers in several countries, such as Algeria, Bahrain, Egypt, Lebanon, Morocco, and Sudan. Therefore, the first newspapers in these countries were often not in Arabic, but rather in a myriad of European languages, such as French, English, Spanish, Italian, and Turkish. According to the Handbook, “mass media started [in Algeria] during the colonial epoch,” and “the initial development of media [in Bahrain] was impacted by the British colonial presence and the discovery of oil,” similarly “the first radio station in Lebanon – now called Radio Lebanon – was established in 1937 as a French operation.” The British established the first Arabic radio station in Bahrain in 1940 “to better compete with the German wavelengths” during WWII. These historical facts highlight the growing economic and cultural influence of Western colonial powers on the Arab world at the start of the 19th century. This influence persisted in the post-colonial era with leading Western companies (such as the British Marconi companies and the U.S. National Broadcasting Company) laying out the infrastructure of broadcast media in Arab states and helping to sustain the multilingual media outlets in those states.

The volume also recognizes several versions of “diaspora Arab media” that emerged due to varying political and economic contexts. For instance, the lack of printing technologies in Oman led “the Omani writer, poet, and journalist Nasser bin Salim bin Adeem Al-Rawahi [to found] Al-Najah newspaper on the island of Zanzibar.” Moving to another distinct context, the Algerians needed to use the power of radio during their anti-French resistance. Accordingly, they established a “diaspora Algerian radio station in Tunisia and Egypt.” Following the same diaspora model, the Mauritanian political parties established the first Mauritanian newspapers in Senegal and used them as bulletin boards directed at the revolutionaries at home during the French occupation. During the British mandate over Palestine, “several Palestinian publications appeared outside Palestine, based primarily in other Arab countries, and some were also founded in Cyprus, London, and Paris.” Another media diaspora model emerged under dictatorial indigenous regimes. During Mubarak’s era in Egypt, it was hard to establish and operate private newspapers due to the “licensing laws and high establishment fees.” This led many Egyptian journalists and investors to “establish their [press] companies outside Egypt,” especially in Cyprus. The volume also documents a unique “media diaspora” model from Kuwait without identifying the circumstances leading to its emergence. This goes back to 1961 when “Kuwait, launched a television station in Dubai under the name of Kuwait TV from Dubai.”

In addition to this historical commonality, the volume features prevailing regulatory maneuvers adopted by Arab governments to maintain their control over journalists and media institutions. After gaining their independence from colonial powers, the Arab ruling elites nationalized all media outlets and established their own broadcasting systems governed by bureaucratic state apparatuses, such as the ministry of information. When the era of private mass media started to take hold in the Arab world in the 1990s, some governments (like in Egypt and Syria) allowed for the establishment of private TV stations but denied them the right to produce and air news. Those regimes were also adamant about installing surveillance devices and tracking technology to monitor online dissent. The volume interestingly labels this online tracking as “technologically savvy authoritarianism.” More importantly, it illustrates the common legal tactic of using vague terms in media regulations to give “authorities wide jurisdiction and flexibility in arresting journalists, filing libel suits, and closing media outlets.” Constitutional provisions in almost all Arab states value freedom of expression, yet Arab lawmakers know how to craft laws that “not only chip away at freedom of expression and freedom of the press but also blatantly contradict those provisions.” The volume terms these maneuvers “defensive democratization,” a preemptive measure to turn any constitutional text about the freedom of the press into ineffective, well-written prose. Such political regimes also use the charges of terrorism and religious extremism against political dissent. For instance, the former Iraqi Prime Minister Nouri Elmaliki often accused his opponents “of being terrorists or sympathetic towards terrorism.”

The Handbook introduces a rich nexus of commonalities that outline the political, legal, and social contexts of Arab mass media. An in-depth analysis of those recurring phenomena would have added to the cognitive contribution of this panoramic volume. Among these commonalities, the most important phenomenon is the effect of the Arab Spring. Any media chronicler would always make a distinction between the pre-and post-Arab Spring epochs. A wave of liberalization and media privatization swept over the Arab world with the eruption of the Arab Spring, but this tide tended to subside a few years later. The volume also remarks on the downfall of state-owned media and the rise of private Arab media conglomerates. However, the owners of these media chains are still somehow connected with the ruling elites in the Arab World, which creates a new model of state control over the media without them either sponsoring or owning them. The volume categorized this model of illiberal media privatization as “soft containment” that imposes self-censorship on the producers of media content. Arab governments also exercise this soft control through “channeling and withholding advertising revenue,” which creates an unofficial state of authoritarianism. Overall, the Handbook raises sporadic issues that needed an overview chapter that conducts a “gestalt” analysis of such issues and phenomena. However, this does not lessen the value of this volume in its first edition. Rather, it advocates for adding more nuance and deeper contribution in the editions to come.