Home / Books & Reviews / BOOK REVIEW | The Suppression of Guilt: The Israeli Media & the Reoccupation of the West Bank 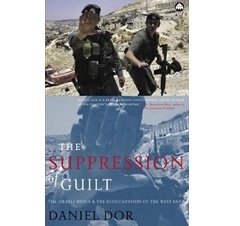 BOOK REVIEW | The Suppression of Guilt: The Israeli Media & the Reoccupation of the West Bank

If there was a common element in the Israeli media coverage of the 2003 military operation “Defensive Shield,” it was a consistent refusal to accept any guilt for what happened in the Palestinian territories. That is what Daniel Dor argues in The Suppression of Guilt: the Israeli Media and the Reoccupation of the West Bank. If houses were abolished, civilians killed or Palestinian allies arrested, Israeli action was presented as a necessary response to Palestinian action, according to Dor’s provocative work.

Dor’s analysis of Ma’ariv, Yediot Ahronot, and Ha’aretz, Israel’s most important newspapers, and its two major television stations Channel 1 and Channel 2 is humbling. After reading The Israeli Media & the Reoccupation of the West Bank, even steadfast optimists who believe in independent media will have to admit that news outlets, at least during war time, tend to dispense with balanced and independent reporting. As Dor shows, most press and television reports on the military action in Ramallah, Nablus and Jenin had nothing to do with free and critical journalism; instead they mirrored the public fascination with soldiers at work and the general political guidelines of the Israeli government. This was most extreme in Ma’ariv, Yediot Ahronot, and Channel 2. Ha’aretz and Channel 1, meanwhile, retained some sense of independence and dared to present alternative views on “Defensive Shield”, be it voices from the Palestinian side or pundits from within Israeli society. Nonetheless, their coverage converged on the general question of guilt and who bore initial responsibility for the conflict, a debate which echoes discussions about the Israel-Hizbullah war in Lebanon.  Dor argues that these media agreed on one central point: that the Israeli government was forced to react in 2003 due to the ongoing Palestinian bomb and suicide attacks. Analysts who claimed the contrary were clearly under-represented in the media; if they found their way into the press or onto television, their statements or articles were presented on the rear pages or outside prime-time.

Methodologically, Dor denies the existence of a single truth (and ergo the notion of objectivity), but also refuses the “amoral acceptance of all social texts as valid representations of one point of view or the other—seemingly leaving us with no foundation whatsoever for critical reasoning.” So he focuses instead on headlines, which are normally formulated by editors rather than correspondents in the field, as they couch reporters’ copy in an emotionally laden, clear-cut “interpretative framework.” It is not that specific news is totally ignored by any of the five media outlets; rather the question is how and where news items are presented. An important news item that does not fit into the general editorial policy of the newspaper is not completely rejected; rather it is pushed to the back pages and is left without a striking headline so that the reader’s attention is not drawn to it.

As a case study of little more than 100 pages, this book provides an in-depth treatment of the state of news coverage during a particular period. Detailed analysis of film clips and dozens of headlines from the period, lay the ground for the general conclusion of the book, namely that the Israeli media deemed the Palestinians (and here especially, of course, Yassir Arafat) responsible for everything that happened.  According to Dor, the Israeli media encouraged the idea that the Israeli Defense Forces always followed ethical principals, and that there simply existed no other possibility for Ariel Sharon and his administration to react as they did.

But what the book fails to do is to place the newspapers and television stations in a proper historical and social context. We learn little about how these outlets are organized, about their economic or commercial logic, or about the influence exerted on them by politicians, religious or societal leaders (outside some basic information in the endnotes). Most importantly, perhaps, is the question of how Israelis use these media. Answers to these questions are not found here and thus a deeper knowledge of the Israeli media system is required if the reader wants to place Dor’s insights into a broader frame of understanding.

Even if Dor’s book is only a case study, it nevertheless contributes to the general debate about how media can contribute to democracy and political freedom. At the end of his analysis, the reader is left asking: Why did the Israeli media institutions behave as they did? Why did they present the news in such a biased way, even though they work in a relatively free and democratic environment—at least compared to the neighboring countries? Why did the media refuse to even question the political consensus on Israel’s innocence? He argues that economic imperatives and the presumed necessity of supporting a nation’s own soldiers or politicians are not sufficient explanatory variables. Rather the coverage took this shape because of the Israeli media’s “independent interest in the maintenance of a certain type of autonomous relationship with the public” (emphasis in the original). Drawing on Benedict Anderson’s study of nationalism, Dor argues that media outlets present what their consumers want to perceive, in order to “maintain their own imagined communities.” Their goal is thus not to be liked by the audience, but rather to maintain the special role of media institutions in Israeli society.

Jan Voelkel is a junior researcher at the Arnold Bergstraesser Institute and a lecturer at Freiburg University and the Institute for the International Education of Students.