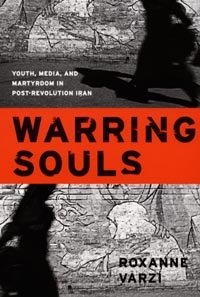 The mystical journey is something to which no Iranian is a stranger.  It can have any number of starts and stops as it runs into problems, goes off course, and comes to conclusions outside of the search… The jagged nature of my journey was also the nature of my fieldwork, which now dictates the structure of this work (21).

Several years ago, a friend and I had a long and rambling conversation comparing ethnography with film.  We were both in the process of writing ethnographic dissertations and he joked that like supposedly “fictional” films based loosely on “reality,” our dissertations might do well to include the epigraph “based on a true story” on their title pages.  We laughed heartily about this and then paused, each of us silently pondering the possibilities and problems of merging research and fiction.  On a number of levels, the relationship between ethnography and processes of fictionalization is central to Roxanne Varzi’s brilliant Warring Souls: Youth, Media and Matryrdom in Post-Revolution Iran.

A bricolage of film criticism, journal entries, Sufi allegories, fictional and non-fictional ethnographic accounts and complex analysis of the relationships between them, Varzi’s work provides the reader with an intimate glimpse into the lives of urban, secular, middle class youth in post-revolution Iran that leaves the reader questioning the relationship between the state, citizens, and the media.  The first half of the book provides an analysis of the visual representations of war, martyrdom and Islam in Iran.  Exploring variations on the theme of self-annihilation (bi-khodi) the first three chapters locate Sufism, mysticism, martyrs, holy war, and the Islamic state within the same spatial and social field.  Varzi argues that a culture in which self-annihilation in holy war is seen as the highest spiritual state is enabled by evoking tropes of mystical self-annihilation and creating a public culture in which martyrs and Islam are revered and celebrated.  However, just as the reader has begun to grapple with the connections between what might appear to be disparate phenomena, the second half of the book complicates our understandings even more.  The second half engages in a discussion of the simultaneous segregation and merging of public and private spaces.  Varzi aptly describes the social imaginaries and habits that come out of the polarization of public and private.  Here she explores the intricate relationship between “surface,” or, public sphere (zaher), and the “interior space of faith” (baten) (132).  In doing this, she gives the reader an intimate and theoretically intricate vision of the tangled internal world of Iranian youth and the often-unexpected ways in which these worlds engage with an external political and religious state.

Scholars employing ethnographic methods have long struggled with questions and concerns related to the relationship between fictionalization and ethnography.  Ethnographers have long debated the ethics of editing quotations from research subjects and fabricating composite characters or scenes in order to more effectively convey ethnographic meaning to the audience.  In doing this, the ethnographer, like the author of works of fiction or creative non-fiction, places himself or herself in the role of authority and requires that the reader trust that they have done substantial research to make the claims that they do.  Varzi’s work takes a bold step in the direction of blurring the lines between fact and fiction.  She moves beyond crafting composite scenes or narratives based on a compilation of observations and voices and actually creates fictionalized characters, scenes and plotlines that occur outside the space and time in which she conducted her research, meaning that as a reader, one is not entirely sure when one is engaging fiction or observed behavior.  Much of her analysis also centers on discussions of the social realities constructed through Iranian film.  Tacking back and forth between ethnographic description and discussions of film, Varzi both reads and constructs social worlds as a text that is at once documentary and fictionalized and, thus, encourages her readers to do the same.

There is also something of the fictional in the way in which she structures her book as a whole.  Both fiction and ethnography seek to immerse the reader in the life world of their subject and their research subjects.  Typically ethnography is also charged with placing these snapshots of the life world in a larger social, historical and often global context.  One might argue that Warring Souls provides intimacy and immersion into experience at the expense of in-depth discussions of the context of social organization and political shifts in Iran.  After reading Warring Souls, one is left feeling that they have been immersed in the lives of Varzi’s companions on her “jagged journey,” but feeling somewhat disoriented as well.  Although we come to clearly understand relationships between Iranian youth, their families, the state and religious authorities, the reader is left with questions about how secular, middle class, youth understand their identity as Iranians, imagine Iran as a whole and envision their position in society.  For example, questions are raised about how Iranian middle class youth imagine non-middle class youth or religious youth.  Reading Warring Souls, one has the impression of a compartmentalized society in which those who inhabit a particular social position have no means to imagine their relationship with other groups.  The book suggests that youth are incapable of imagining or encountering a social space that is neither fully public (and thus dominated by state and religious norms of behavior) nor fully private (intimate and limited to engagement with others who occupy the same position) thus leading to dangerous polarities in the self, mental illness and suicide.  However, while readers unfamiliar with everyday life in Iran may encounter a distinct sense of vertigo brought on by a lack of contextualizing discussion, Varzi’s work also leaves us with the impression that we are no more disoriented than the middle class youth whose lives Varzi has exposed us to.  As if we were immersed in a fictional account, when reading this book we navigate an uneven and unpredictable path with the author and her research subjects.

If Warring Souls is lacking in discussion of social context, it more than compensates through the in-depth discussion of the internal worlds of Iranian youth and the ways in which these internal worlds exist in tension with the demands of public, Islamic culture.  One of the strengths of the book is her theorization of the ways that multiple identities are navigated by youth.  Moving beyond discussions of how public images interpolate subjects and subjects resist, she shows how the pervasive landscape of public propaganda and the ubiquitous presence of the ever vigilant komiteh monitoring Iranian youth’s every move, lead youth to develop a “conscious unawareness” of their surroundings: “…transgression in Iran is about being consciously unaware in spaces one does not want to be in: to walk through the city like a sleepwalker or somnabulist” (126).  Propaganda and stringent rules that dictate dress and behavior do not interpolate the subject and thus fail to transform youth into the ideal Islamic citizen; however, youth are practiced at producing the public illusion of compliance.  Youth thus become part of the landscape of which they remain “consciously unaware.”

Varzi argues that while public Islamic culture does have an impact on youth, youth’s internalization of strict religious rules does not preclude defying those rules.  Rather, internalization of the rules is a pre-requisite for carving out private spaces.  Varzi clearly documents numerous examples of youth producing and locating spaces where they can safely engage in social behaviors that reflect their own internal values.  Yet this is a compartmentalized world and youth constantly experience the strain of maintaining the duality—keeping up public appearances and maintaining their sense of self.  While Varzi’s analysis limits itself to Iran, this complex understanding of how state propaganda can simultaneously be internalized and rejected through the process of remaining “consciously unaware” has implications for studies that go beyond Iran and may prove to be informative for anyone looking at state production of the public sphere and the complex ways that the public is internalized and reconstituted in private spaces.

Overall, Warring Souls is complex and intricate on a number of levels.  Although somewhat limited in providing an overview of Iranian social organization and locating middle class youth within Iranian society, the book provides exceptional insights into the lived realities of a particular population of Iranian youth.  As with any good work of fiction, creative non-fiction, or ethnography, its power is in its explanatory and exploratory capacity – it details often overlooked social phenomena and successfully raises as many questions as it answers.  This book provides valuable insights for readers wishing to engage more deeply with the study of youth cultures in Iran and theoretical tools for researchers to inform future studies of relationships between states and citizens in Iran and elsewhere.

Jennifer Riggan is Assistant Professor in the Department of History and International Studies at Arcadia University.