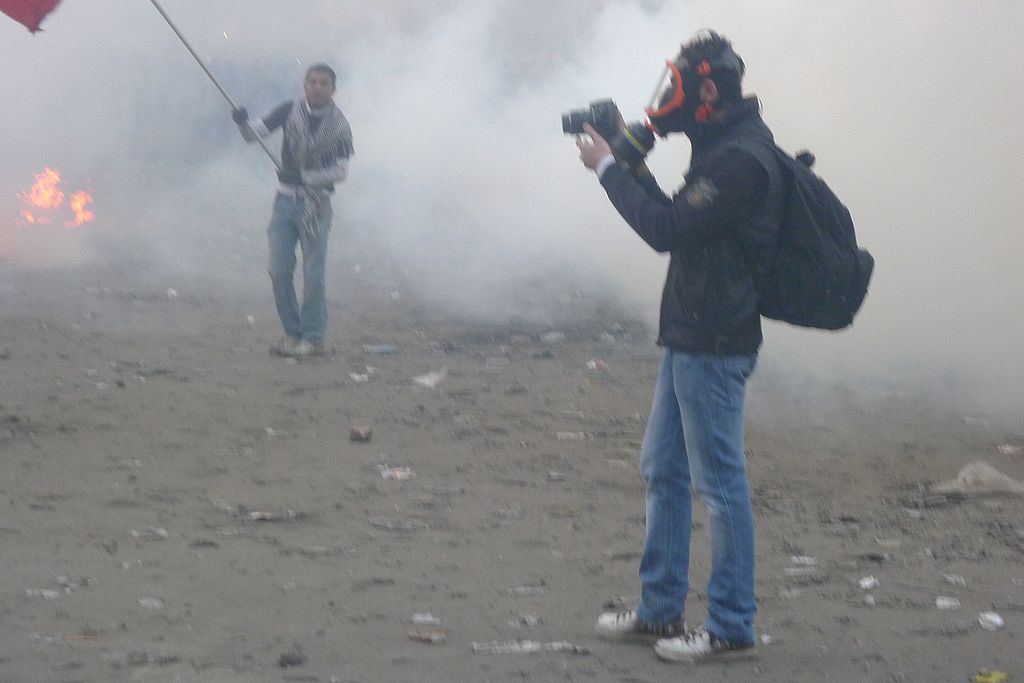 Journalist in gas mask near Ministry of Interior, Photo by Alisdare Hickson

With a series of recent high profile cases, including the detention and charges against noted journalist Hossam Bahgat and more recently Ismail Alexandrani, there has been substantial scrutiny on the Egyptian government’s treatment of journalists.

Ghada Shahbender, co-founder of the Kefaya movement and a former member of the Egyptian Organization for Human Rights expressed concern about the limitations placed on journalists, particularly at the behest of the Ministry of Interior. Shahbender stated that the ministry hinders the work of journalists by “killing, arresting, detaining, and breaking cameras.”  She added that several journalists have been arrested while covering riots in the street. “It is the journalist’s job to be in the street with a camera because he is covering an event, he is conveying what is happening to the people.”

Director of the Security Media Department in the Ministry of Interior Colonel Ashraf Al-Anani stated that due to the nature of their work, some journalists might face dangers while doing their job. Al-Anani added that journalists who go into the field are “directed and informed on the places from where they can cover events [and where] might be dangerous.” Journalists are given permits as a mechanism to help ensure their safety in the field. “These permits allow us to know where they are shooting during the riots so we can secure them,” Al-Anani explained, “They also help us know that this person in the street with a camera is actually a journalist.”

However Shahbender argues that, “It is not [the Interior Ministry’s] job to act as a supervisor and interfere in the content of what will be published.”

In the last two years, there have been several examples of censorship in the Egyptian press. The February 6, 2014 issue of al Watan newspaper was collected from the market because of an article discussing the finances of both the Ministry of Defense and the Ministry of Interior. The October 2, 2014 issue of al Masry al Youm was seized after an interview with the former Intelligence Chief Rafaat Gebril was said to contain information that would harm national security.

Al-Anani insisted that the Ministry of Interior does not gain anything when a newspaper is stopped from printing. “This is not our specialty, this is something organized by law it is not our job to stop a newspaper from publishing its content.”

Under article 211 of the 2014 Egyptian constitution, the Supreme Council for Media (still under construction) will form a unified law to organize journalism and media pending presidential approval. The law includes several grey areas. For example, article three in the new law states that “to maintain national security it is approved to prevent publications, newspapers, or informational materials issued or broadcast abroad from entering Egypt.”

Writer and former radio host Sayed Al Ghadban, himself a member of the committee to set the new law, stated that: “Any content that enters Egypt might be monitored. At the moment this actually happens because if they found anything that would affect the national security of the country, they would stop it from entering.” He further explained that, “This does not include broadcasts that come from outside of Egypt; we live in an era that no one can stop a television channel [from broadcasting their content].”