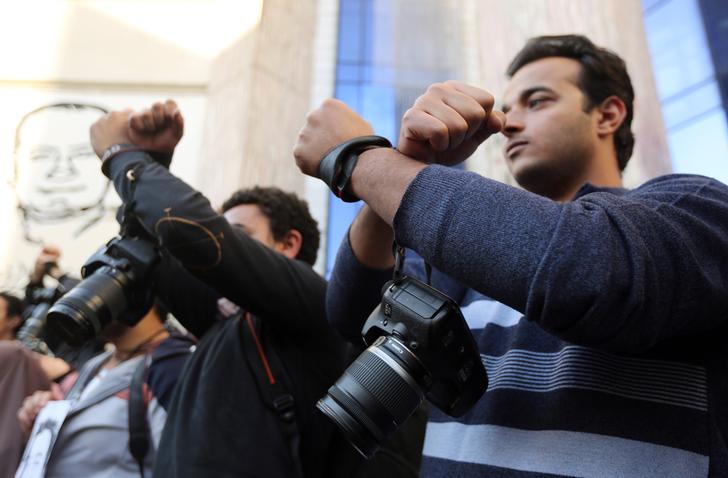 CAIRO—On Monday, a Cairo misdemeanor court sentenced four journalists to three years in prison each on charges of 'publishing false news' and 'membership in an illegal organization'. The verdict is subject to appeal.

In July 2015, security forces had arrested the four journalists outside the Zeinhom morgue, Cairo's main mortuary.

Journalist Abu Bakr Khallaf, who heads an online media journalists union, and photojournalists Mohamed Adly, Sherif Ashraf and Hamdy Mokhtar were arrested while taking photos and conducting interviews while autopsy was being performed on the corpses of nine members of the Muslim Brotherhood group.

Egypt ranked second on a list prepared by France-based watchdog Reporters Without Borders of countries that frequently arrested journalists in 2014.

In July, police killed nine Muslim Brotherhood leaders, with conflicting reports on the circumstances surrounding their deaths. The Interior Ministry said they died in a security raid on an apartment in Cairo's 6th of October suburb, saying they were plotting to carry out terrorist attacks, and accused them of shooting at the police as the apartment was raided.

But a Muslim Brotherhood spokesman said they were unarmed, adding that the reports on clashes with security forces were lies.

In December 2013 the Egyptian government listed the Muslim Brotherhood as a terrorist organization, following the military ouster of then-president Mohamed Morsi. Morsi was ousted in July 2013 following mass protests against his rule.

The Egyptian government insists the group is behind the wave of militancy that has targeted security personnel since July 2013.

The Brotherhood denies the accusations.