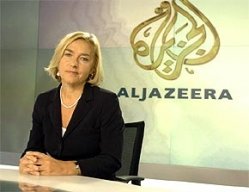 
George Weyman: Al Jazeera English started with the mission of reversing the news flow in the world from south to north.  Have you succeeded in that mission and how is that mission developing?

Sue Phillips:  I think we have succeeded in reversing the flow of information from south to north, that was the mission and vision of Al Jazeera English when we first launched, and we launched in November last year, a very successful launch.  That and lots of other things we set out to do I think we actually achieved, I mean it sounds rather glib, but I think we have.  Including covering the developing word which was one of or missions as well and I think we have done that quite successfully over the last eight months.

Weyman: But perhaps these stories are hard to sell to a mass audience, how do you build an audience at the same time as telling stories that otherwise never get heard?

Phillips:  I think that most of the audience and certainly the feedback that we’ve had from all over the world is proving to us that Al Jazeera is definitely alternative viewing. Al Jazeera is providing a voice to the voiceless.  People are interested in the fact that we go to the streets, we don’t necessarily always go to the politicians or the experts.  We will go to the person in the street to get – it’s always a balanced report – but it’s at grass roots level, and I think the feedback – certainly the feedback we’ve seen on the net – has proved that that’s what is interesting people.

Weyman:  So you are actually building an audience for example in America in Europe, places where you wanted to challenge your viewers?

Phillips:  The audience figures we don’t have because apparently you have to be on air for so many months and we’re just working on that now so in the next few months we will have the actual statistics.  At launch I think we were at eighty million households which was 8 months ago so one would imagine that it’s at least one hundred million now but we don’t have the actual eyeballs.  The response, for example, on the website the most hits come from Americans, which is quite extraordinary because we are not on cable as you know in the United States, but it is on broadband, so the response--and that has changed quite a lot over the last two years since we first started setting this up.  And since it launched and people actually saw what we had to offer there was a change, a sea change in fact, as to how good this channel was and a lot of North Americans are really hungry to see it.

Weyman:  Talking about the website, we are sitting here in the fabulous broadcast center in London.  Why have you invested so much in high definition television and four broadcast centers around the world and not so much on the website?

Phillips:  We decided that television would be the first thing that we would invest in.  We decided to go HD because that is the way of the future.  Everything will be HD one day and why not lead the way?  And that’s exactly what we are doing.  In terms of the website, in the last about three of four months now we have invested heavily.  There is a lot more interaction on the website.  You will see most of Al Jazeera television, the output is on the website now and you can’t do everything at once, you’ve got to sort of pace it and for us, the screen, the TV screen was the most important at the time just after launch but the website is catching up very fast.

Weyman:  Before launch there was a lot of debate about whether Al Jazeera English would be closely aligned with the Arabic news channel, would be really an English language version of the Arabic language channel.  How closely are you aligned - are you on a collision course or are you both operating independently?

Phillips:  No I think we quite compliment each other. I mean Al Jazeera English draws on the heritage of Al Jazeera Arabic; Al Jazeera Arabic has been around a long time, eleven years in fact, and as you know revolutionized broadcasting in the Middle East and Al Jazeera English wouldn’t be here if it wasn’t for Al Jazeera Arabic.  We around the world we share bureaus together, we share resources, and they often will take our programming, they translate it, and if they’ve got a correspondent in a part of the world where there is a breaking news story and that correspondent speaks English then clearly we use them and vice versa.  We exchange a lot of information between our editorial meetings, our planning meetings, if there’s a big story we try to join forces when we can – covering the Turkish elections, the Paris elections certainly from this point of view.  There are separate editorial boards, but those two boards meet.  The reason for that is Arabic is in Arabic; it’s a different viewership.  We are in English and we come under Ofcom so we come under, we are guided by Western broadcasting standards, so that is the difference – and it is a different format which, as you know, Al Jazeera Arabic is very much based on the discussion shows, lots of breaking news, but its more of a discussion show format.  We are the first half-hour is rolling news, and the back half hour is programming so there’s kind of a distinction there.

Weyman:  The programming seems to be where you’re leading really in terms of People in Power, and Every Woman, Riz Khan’s show, you’ve really developed and worked on programming, but there’s a sense in which maybe the news hasn’t led the field.

Phillips:  I think the programming is incredibly strong, and you’re quire right, a lot of those shows are quite recognized now.  One of our most popular shows is The Listening Post for example and the very strong documentaries that have been shown on People in Power and Witness is really getting a great name for Al Jazeera English.  In terms of the news, I think you have to evolve, you have to develop.  We are covering the global world.  We are covering a lot more of the developing world than perhaps other organizations do.   We are also covering places that other organizations don’t go to.  We return to those places.  We don’t just pop into Darfur for five days and don’t return for a year.  We’re pretty much always there covering.  So it’s on a grand scale, and I think were still finding our feet a little bit in certain areas.  And like our programming, our news coverage is the alternative viewing for viewers if you like.  And we do, a good thirty percent of our coverage is Middle Eastern and most days, although that’s not difficult these days because there is so much going on in that part of the world  but I think we have become the channel of reference in the Middle East too.

Phillips:  You have the headquarters which is in Doha and you have Kuala Lumpur, London, and Washington DC, the three major broadcast centers.  In addition to that there are forty pocket bureaus around the world. And those are placed in a lot of the developing world and those bureaus report to the broadcast centers, and obviously in my region,  I don’t have so much of the developing world because I’m based in the UK, but certainly Kuala Lumpur, Doha, and DC do, so I think we’ve got it pretty much sewn up, and where possible, we have got the nationals of those countries working for us, and that was another thing that we set out to do, we wanted to have Africans working in Africa, we wanted to have Asians working in Asia, and I think we’ve really succeeded there.

Weyman: When the channel set up you really wanted to be broadcast in America, but unfortunately didn’t find a provider to broadcast the channel there.  How much of a blow was that?

Phillips:  Not really, I mean we’re seen in so many other parts of the world and the U.S. is just another country.  It hasn’t changed anything for us.  In fact in lots of ways it has done us a favor because the Americans, by looking at the response on the website, people really want it in America.  They want to see this channel, so I think there’s quite a lobby out there to get Al Jazeera and I think the next few months we’ll probably succeed and get on a cable channel there, but for the time being people have to see it on broadband and that’s looking at that technology most people have access to now.

Weyman: For a fairly new channel, it’s been a turbulent past month and there are reports that Wadah Khanfar has been edged out of the board.  There are suggestions among media commentators that in fact U.S. pressure is coming to bear on the Qatari emir and that those changes are having an effect in Al Jazeera.

Phillips: Wadah Khanfar comes under the Al Jazeera network so it’s difficult for me to comment on that, but he still retains his role at the moment and in terms of, I’m not aware of U.S. pressure, I don’t think there’s ever any pressure on if you look at the history of Al Jazeera Arabic over the last eleven years, you know a very bold controversial channel, and I don’t think any pressure from anywhere has ever affected the Qatari government or the emir.

Weyman:  So you are accountable to the Qatari emir.  Does that impinge on your editorial independence?

Phillips:  Not at all.  Not at all.  We have editorial boards that the emir or, anybody in the government, has never interfered with, they leave us to do our own business of journalism and we guide our own editorial.

Weyman:  So what are the challenges for the future?  Can we expect new faces, new programming?

Phillips:  I think we’d like to open up some more bureaus, we’d like to cover even more of the world than we’re covering now, and we will certainly hire more people.  We’re expanding all the time which is great news, and so far, we seem to be getting it right, I’m happy to say.