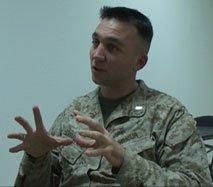 This interview with First Lieutenant Josh Rushing (U.S. Marines), a spokesman and Public Information Officer at Coalition Central Command (Centcom), was conducted by telephone on April 8,2002 and incorporates elements of an earlier interview conducted in person by TBS chief editor Schleifer, who traveled to the Gulf (Doha, Dubai, and Abu Dhabi) during the first week of the war as TBS special correspondent.

Schleifer: With Baghdad airport clearly secured, and significant incursions into Baghdad that only the ideologically intoxicated and the Iraqi Minister of Information cannot see the beginning of the end for the regime appears to be in sight, and with Najaf not just secured but obviously delighting in its status as a liberated city, with all of this, have you noticed any shift in attitude, any new willingness on the part of the Arab media, to recognize the credibility of what they have been hearing and ignoring from Coalition spokesmen here at Central Command for nearly the past three weeks?

Rushing: First of all, understand that there is no correlation between Arab media and the Iraqi people. What Arab media do the Iraqi people get? They don't get Al Jazeera since satellite dishes are prohibited. I believe the only Arab press the Iraqi people get is their own government press and they have not trusted that for a long time. The Arab world is forming very strong opinions of us based on biased coverage by the Arab press.

But then you have this quarantined society inside Iraq which isn't hearing all this Arab regional TV discourse and interpretative if not misleading reporting. So the Iraqi people, unlike most other Arab people, can judge us by our actions and you are seeing now in the southern cities like Najaf that they are very happy to have us there.

I read a fascinating interview in the New York Times, in which the reporter is talking with a friendly shopkeeper in Nasiriyya. And the shopkeeper says, "Stop killing the paramilitaries who your army is now fighting outside of town. They aren't Iraqis: they are Jordanians, Sudanese, Syrians, and Egyptians. They come here with the wrong impression. They think you are intentionally killing Iraqi civilians and are seizing the mosques." The shopkeeper was making the point that the Arab press is creating a hatred based on a false image of Americans.

The irony is it might be more excusable if the Arab media was doing this to boost the morale of the Iraqis but they are more likely simply pandering to Arab Nationalist ideologues who dominate intellectual discourse.

Arab newsmen from a leading Arab satellite admit their coverage is biased but says it has to be that way because otherwise they get cut out of the action in Baghdad and elsewhere in Iraq where the regime still has control and they implied that once the regime collapses their coverage will become more balanced.

Schleifer: Would you describe the embedding experience as a success.

Rushing: There are over 500 embeds reporting on the action as they see it unfold. Constantly we have news organizations calling us back for confirmation of these reports from the field. But we deal with strategic issues and opportunities. If something happens out in the battlefield, we will get 25 to 50 calls because they don't want to attribute to a competitor so they call us even though the embed news reports reach the public before we get it through channels. We have to say that we cannot confirm because if the incident is important it still takes time for confirmation to get back to us through channels.

And furthermore Gen. Frank and his staff don't have a need to know for that sort of micro-action which-with embedded reporters-is what gets reported. We would be inundated if every action got reported back through Pentagon operational channels.

Schleifer: At the briefing some very impressive footage of a Ranger night combat raid was shown. Are you providing this footage to newsmen here because at this stage (first week) when an American military spokesman or even an American reporter stands up and makes a claim, like a devastating raid on Iraqi positions, or the distance remaining to Baghdad, no one in the Arab world believes either the reporter or the spokesman given the mind set formed by much of modern Arab political culture, which denies whatever is inconvenient or uncomfortable, that has been aggravated by some of the claims coming out of here the first couple days, like that Umm Qasr had been taken and then it turned out there were elements in the town still resisting days after US military sources said the town was taken.

Rushing: Yes, we distributed that particular piece of combat footage to the press pool.

Schleifer: I cannot stress enough the importance of generating more footage like that and distributing it and shooting it through to conclusion of the episode so if you claim that the position raided was overrun by US Special Forces or Rangers, then we see just that. I know the reason for the embedded cameramen not having pictures of important actions is because their presence could slow attack and infiltration teams down and because the environment is just too dangerous. But that's precisely why Army or Marine combat photographers exist within the corps - they are trained military men who can keep up with a camera instead of a rifle. Even without the credibility problem television in general craves picture. In the old days when I was a producer reporter and a bureau chief nobody in New York would never ask me if I had the story when I called in; the only asked if I had the picture.

Rushing: That's a point well taken and I will pass that comment on. But you should know that when we announce that an objective like Umm Q asr or Nasiriyya is "secured" that doesn't mean that its safe or cleared of all enemy forces. It means that we have secured enough of a hold on the objective to accomplish a paramount mission like sending humanitarian assistance through a town or controlling critical areas within the town like bridges necessary for moving men and materials up to another front. So "secured" is different from "safe" and the media confused the terms, so when we said Um Qasr was secured they thought it meant it was safe.

Schleifer: Do you do on-camera interviews with the Arab satellite channels?

Rushing: Yes we do. I have done several with Al Jazeera and once I got them to interview James Cladd, who is a state department officer attached here, as well as with Major Frank Thorpe, who is the senior spokesman.

Schleifer: Has Al Jazeera sought out more interviews with Army and State Department spokesmen here than Abu Dhabi, which is the only comparison since I know Al Arabiya isn't able to get here since the Qatari officials wont accredit them in what appears to be a payback for Saudi Arabia banning Al Jazeera from operating in the Kingdom.

Rushing: Yes they have. In part that's because they have a big office here at Centcom - three correspondents in comparison to Abu Dhabi's one but also because Abu Dhabi's correspondent here, in contrast to the overall conduct of the channel is highly politicized and confrontational towards us. But you know we will talk to anyone who we feel will give us a fair shake, from any country and any channel. All we ask is that they don't see themselves as representing one side or the other. We also provide the local channels with information in the form of press releases and background reports a well as hard-to-get video, usually of special operations.

There are more than 500 embeds out in the field with American and British units, that's more information, more journalism coming out of this war than any earlier war and being transmitted in many cases live from the front. The challenge here is the Gulf War Paradigm. Since we cannot keep up with the embedded newsmen we are encouraging the news organizations to go with what they have.