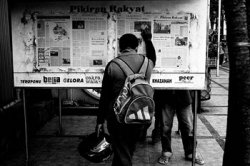 Lessons worth learning: The Indonesian model

What a difference a few thousand miles makes. I spent the summer in Indonesia, a vast and complex nation that is home to more Muslims than all Arab countries put together. When I lived there in the 1990s, covering the final years of the Suharto era, there were many parallels to the situation in the Arab world today. Suharto, a former Army general, had held power for three decades and the military still served as the guarantor of power. Opposition politics was tightly constrained. Grassroots Islamic organizations were sidelined from the political process. And the media was under siege.

The most aggressive publication in the country, the weekly magazine Tempo, was shut down in the mid-1990s and driven deep underground after reporting about a financially-questionable deal in which the then-vice president bought the entire navy of the former East Germany. The rest of the media carefully hewed the party line.[i]

Today, everything is different. In the aftermath of Suharto, there was an explosion of new independent media outlets and a journalistic free-for-all that reflected the no-holds-barred politics that replaced one-party rule. While there are today more articles in the Criminal Code that constrain journalists than in the Suharto years, and the country has yet to remove the criminal libel provisions that stifle press freedom, the media largely reports what it wants (and, in the case of the tabloid press, what it wants to make up).

Tempo is not only back, but it has evolved into one of the nation’s most influential independent news organizations, with magazines, regional newspapers and other media properties.

It’s all a stark contrast to the Arab world.  I returned home to stories about Egypt’s proposed new Draconian press law; to have editors tell me of three “gag orders” put on the media in as many months over scandals involving powerful businessmen close to the government and the kidnapping of tourists in southern Egypt; and to an in-box filled with a grim mountain of stories about journalists around the region assassinated, detained and tortured, attacked by mobs, or, as in the case of Tunisian journalist rights campaigner Sihem Bensedrine and her editor husband, prevented from leaving the country by government thugs.

And if all that was not enough, there was that bizarre fatwa ordering death to TV station owners who broadcast “immoral” programs, the follow-up fatwa prescribing flogging for journalists who criticize clerics (aimed at those making fun of the former), and the decision by Egypt’s Supreme Council of the Press (or, as reporters call it, the “Supreme Council for Obstructing the Press”) to cancel the license of a new independent daily, Ashorouq, for the offense of allowing journalists on the paper to own shares.

Ashorouq violated what is fast becoming the unwritten rule in the Arab world. Where private media is permitted, its ownership must remain in “safe” hands. Something similar is occurring in Indonesia, not so much by government design, but because of who controls the capital.

Huge conglomerates dominate the media space. As on the pan-Arab media scene, these corporations are owned by figures closely aligned with political powerbrokers. They control television stations, newspapers, magazines, radio stations, movie production houses, and mobile communications. Some are expanding across Asia. The MNC group, controlled by one of the sons of former President Suharto, recently bought okezone.com, the third-largest website in China, while Rupert Murdoch has bought a stake in Indonesia's ANTV, controlled by the country's chief economy minister.

There is another parallel to the Arab world. Journalist salaries in Indonesia remain appallingly low. According to the Alliance of Independent Journalists, the average starting salary is less than US $100 a month. On the largest newspapers, like Kompas and Bisnis Indonesia, a reporter with less than five years experience is making only slightly more than the national minimum wage.

Some of the recent paeans to Indonesia’s “Islamic” democracy have tended to understate the rising influence of Islamist hardliners in politics and society.[ii] Their presence is particularly felt in the media, where journalists have found themselves under physical, economic and political threat.

“The radicals know how to manipulate the media,” Endy Bayuni, chief editor of The Jakarta Post, told me. “We have been outsmarted by the spin doctors and the radicals. The media has to get its act together.”

But it goes beyond “outsmarting.” Numerous reporters told me they regularly receive threatening phone calls from hard-line Islamist groups, and several newspapers and radio stations have been stormed and ransacked.

But in other ways, the media very much has “its act together.” Over the past decade, regions such as the Malukus, Poso and Aceh have been wracked by communal violence that has taken thousands of lives. Radio stations that helped feed the violence have now taken on an overt peacemaking mission, carrying programming designed to ameliorate violence. It may not fit into the classic role of journalists as “unbiased” observer, a position that often feeds polarization, but it is a model that has potential application in the Arab world.

The same might be said for Indonesia as a whole. Islamic values are an intrinsic part of the government’s worldview, but, beyond family law,[iii] sharia is not enforced, opposition politics is lively within a culture of compromise, and an appetite for retribution is being replaced by visions of the future. Even Suharto, though subject to countless lawsuits over the tens of billions he is said to have pilfered, is peacefully living out his final years at his modest home in a quiet, tree-lined Jakarta neighborhood. No divisive show trial or cell phone footage from the gallows for him.

Not everything in Indonesia applies to the Arab world, but it is a model worth noting.

Lawrence Pintak,director of the Kamal Adham Center for Journalism Training at The American University in Cairo, is publisher and co-editor of Arab Media & Society. His latest book is Reflections in a Bloodshot Lens: America, Islam & the War of Ideas.

i.  For a fascinating inside look at both Tempo and how a news organization survives in an authoritarian state, see Janet Steele, Wars Within: The Story of Tempo, an Independent Magazine in Soeharto’s Indonesia (Jakarta, Singapore: Equinox Pub.; Institute of Southeast Asian Studies, 2005).

iii.  And the province of Aceh, where until recently Islamist rebels led a revolt.