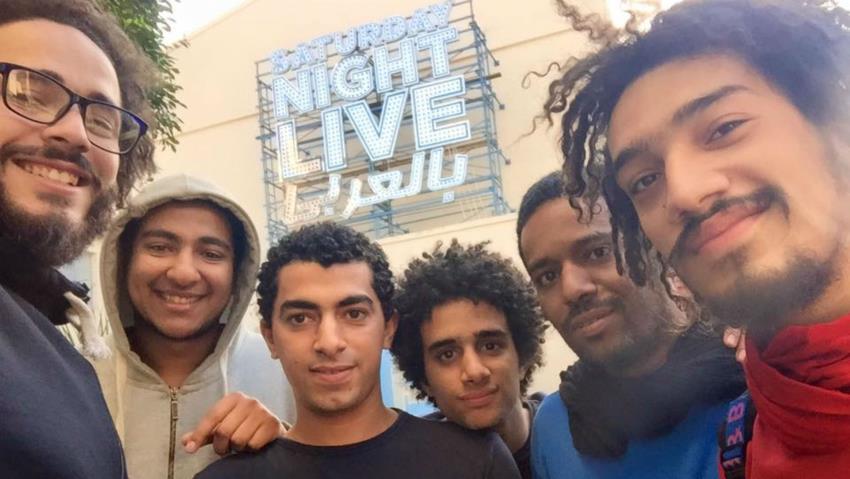 The six members of the satirical group Street Children. Via Facebook.

CAIRO—A social media campaign of selfies went viral yesterday in response to the recent prosecutorial decision to detain members of the group Street Children for 15 days. The six person group—known as Atfal al–Shawarea in Arabic—films satirical, selfie-style videos that address a variety of social phenomena. Their most recent videos poked fun at the president and his supporters directly.

The prosecution accused members of participating in a group that "resist[s] the fundamental principles of the state”: encouraging resistance towards the authorities, broadcasting false news, and inciting an overthrow of the regime.

The youngest member of the group—Ezz El-Din Khaled Mohamed, 19—was the first one arrested. His release was ordered on Monday with bail set at EGP 10,000, but the prosecution delayed with an unsuccessful appeal. While the directive was supposed to be upheld the following day, his defense lawyer, Tarek al-Awady, wrote on Facebook today that Ezz El-Din has yet to be released. Ezz El-Din is currently being detained at the police station on the "orders of the Homeland Security," even though the bail has already been paid.

On their now-deactivated Facebook page, Street Children described themselves as “youth who work at the theater [sic].” The boys first collaborated in theater workshops organized by a Jesuit school. Since then, they have developed a passion for performing in what they call "street theatre": creating art pieces in the streets that they film with their cellphones.

In an interview with ONTV's “Al-Soura Al-Kamila”—The Complete Picture—the young men explain the process of composing their videos. They collect ideas and then put them together in sequences that convey their vision. One member added that they always recite songs and movie excerpts from memory. TV show host Liliane Daoud described the group's performances as "a synergy of singing, acting and comedy."

Hundreds of people took to social media to protest the group’s detention and express support. These activists and social media users called for the Street Children’s freedom by posting personal selfies with the Arabic hashtag, “Does the phone camera shake/scare you?”

Popular Egyptian satirist Bassem Youssef was one of many prominent figures who joined the campaign. In the video he posted, Youssef recalled one of President al-Sisi’s recent proclamations ironically: “I don’t get scared.”

Abdelrahman Mansour also joined the campaign. As the man behind the well-known Facebook page "We are all Khaled Said," Mansour is an impressive ally. It was this Facebook page that contributed to the initial spark of the 2011 uprising—ultimately leading to the ousting of former President Hosni Mubarak. "[The Street Children are] witty, funny and use an iPhone… but this seemed too threatening for state security," Mansour wrote. "A hashtag and selfie campaign has been launched…demanding their immediate release but also asking the current regime why it feels so threatened by children with a camera?"

Political scientist Amr Hamzawy tweeted about the arrest, commenting that in “the republic of fear the citizen is not but a source of noise that deserves gagging”. The energy behind this campaign is not singular: Over the past few months an increasing number of people have rallied behind young persons detained during protests, removed from cafes and homes, and languishing behind bars after receiving lengthy prison sentences.

A version of this article originally appeared in Aswat Masriya.