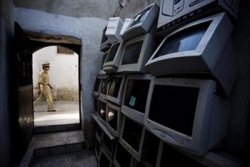 One step forward, two steps back. That seems to be the depressing pattern of Arab media these days. If my kids brought home a report card with such mixed grades, they would be grounded for a month. Unfortunately for Arab journalists, the stakes are even higher.

We begin the new year with scores of Arab reporters, editors and bloggers languishing in prison cells across the region. Even more depressingly, in 2007 48 journalists gave their lives practicing their craft in the Middle East, the vast majority of them in Iraq, where, as of this writing, 207 journalists have died since 2003, the greatest toll of reporters since World War II.

There are many reasons journalists have become targets in the conflict zones of the Middle East and broader Muslim world. Among them is the sad reality that the media has allowed itself to become a weapon of war and, in the process therefore, a target. Just look at the pattern: over the past six years, according to Reporters sans Frontiers, journalist deaths worldwide have increased by 244 percent, from 25 in 2002 to 85 last year. In the years after 9/11, news organizations in the West – particularly the U.S. – and the Arab world came to be identified with the combatants on each side.

More recently, there has been a recognition in newsrooms on both sides of the world that news organizations have allowed themselves to become participants in the conflict. But the damage has already been done. Today, those who plan war – whether in the Pentagon, the slums of Baghdad or the mountains of Pakistan – recognize that, as al-Qaeda’s Ayman Al-Zawahiri put it, "More than half of the battle is taking place on the battlefield of the media.”

Governments also recognize the power of journalism, which is why barely a day goes by without news of another reporter, editor or “citizen journalist” being jailed by some regime or another. RSF’s press freedom map of the Middle East is largely black, a visual reminder that in 2007 some 50 journalists and media assistants were killed; more than 160 journalists and bloggers were arrested, imprisoned or kidnapped; and scores more were attacked or threatened.

I am frequently asked whether things are improving for media in the Arab world. That depends on whether you tend to see the glass half full or half empty. For every positive development, it seems, there is a negative one, and vice versa. In the Emirates, what is being billed as an aggressive new English-language daily, staffed with a high-caliber mix of Arab and expatriate journalists, is set to launch; yet the façade of press freedom in Dubai’s much vaunted Media City was punctured when, as a favor to Pervez Musharraf, the government pulled the plug on Pakistani satellite TV channels based there.

At the same time, Al Jazeera’s reputation is taking a pounding amid stories leaking from the newsroom that Qatar’s royals have ordered the Arabic channel to go soft on Saudi Arabia in the interest of Sunni solidarity in the face of the Iranian threat. In Syria and Saudi Arabia government crackdowns on dissent were marked by the jailing of bloggers, the blocking of news and blogging sites and the detention of other outspoken critics.

And while the convictions of police officers in Cairo and Alexandria was a direct result of the now infamous torture videos posted online by blogger Wael Abbas and others, in 2007 at least 11 Egyptian journalists were convicted on a variety of charges – including “insulting the symbols of the state and party,” Mubarak and his son, and the regime continues its campaign against critics in the media and elsewhere in civil society. Among the charges still outstanding against one high-profile editor is a suit for mental anguish filed by a party stalwart who says he was so upset at published rumors last summer that the president was possibly ill that it caused him pain and suffering. The suit would be laughable if the editor, Ibrahim Eissa of Ad-Dustour, didn’t face prison if convicted.

Meanwhile, in a tiff that speaks volumes about the naiveté with which they ventured into the Arab world, the largely British staff at Al Jazeera English is in an uproar over cuts in salaries and benefits and the sense that, as one anonymous insider posted on the Dubai media blog, “despite many members of staff putting in over 70 hour weeks and not taking leave for over a year, Al Jazeera doesn’t really seem to care.” With some employees quitting and others talking of a strike, the blogger wrote, there is an overwhelming sense in the newsroom that “we are being used.”

Journalists in the Arab world being used? Perish the thought.

Lawrence Pintak is the publisher/co-editor of Arab Media & Society and director of the Center for Electronic Journalism at The American University in Cairo. His most recent book is Reflections in a Bloodshot Lens: America, Islam & the War of Ideas.