Home / Uncategorized / The New Face of President Asad on YouTube 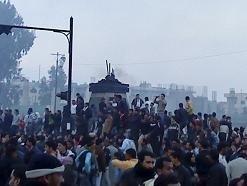 In 1984, the first statue of Hafez al-Asad in Damascus was erected in front of the newly constructed Asad library. The bronze replica of the late Syrian president sits in a chair atop a dozen steps overlooking the highly trafficked Umayad Square roundabout. Hafez had already been in power for over a decade, but apparently it had taken an attempted coup d’etat at the hands of his brother Rifa’t a year earlier to prompt him to solidify his sculptural presence in the capital.

Three decades later, the statues, posters, decals, and even mosaics of Hafez and his descendants have proliferated in Damascus and every other city in Syria. From Souq Hamidiyeh to the top of Mount Qassioun, there is hardly any public space that is not watched over by the face of an Asad. While many Syrians respect the Asads and view the public representations as a form of appreciation, plenty others privately cringe when they see depictions of current president Bashar al-Asad dotted with red hearts.

Yasar Fatoum, a Syrian activist living abroad, said of the Asad cult, “You see him everywhere. His picture is the only thing that you see in the school, the bus, the supermarket, the stadium, the street, the university, and even in the hospital. He is the father, the leader, the smartest, the patriot, the strongest.” After a while, the cult becomes “part of a daily routine,” he said. “When you wash your face in the morning, you feel nothing, right?”

This desensitization to the cult of Asad is detailed in University of Chicago Professor Lisa Wedeen’s Ambiguities of Domination. She writes that daily encounters with the symbols of Asad, both graphically and rhetorically, help habituate “people to perform the gestures and pronounce the slogans constitutive of their obedience.” Simultaneously, these symbols can “invite transgressions.”

Until March 2011, the statues and posters of the Asads in parks and on buildings remained secure. Then, following small demonstrations in Marjeh Square in Damascus, several youth in the southern Syrian city of Deraa did the unthinkable: they penned anti-regime graffiti in public. Their arrests prompted the largest demonstrations seen in Syria thus far, with protesters calling for an end to corruption. When the police responded with force and killed three protesters, the message of future protests changed. On March 20, a group set fire to the Baath party headquarters in Deraa and many called out the popular slogan “The People Want the Fall of the Regime.”

The next week, on March 25, demonstrators in Deraa, amidst a throng of supporters, toppled a statue of Hafez al-Asad with sticks and bare hands. This was one of the first documented attacks on a symbol of the Asad regime in decades. Syrian official and privately owned news outlets like al-Thawra and Rami Makhlouf’s al-Watan maintained the narrative that gangs of provocateurs and militants were the actors behind the vandalizing of cities. Yet online – via the social media trinity Facebook, Twitter, and YouTube – many Syrian activists christened this action as the beginning of “Hamlat al-Tathir” or the “cleansing campaign” against visual symbols of the Asad regime.

Dozens of “cleansing campaign” videos have since appeared on YouTube. Most of the clips were shot on cell phone cameras in Homs, Hama, and Deraa. They capture scenes that range from two-man operations setting fire to what they call the largest poster of Bashar in Homs or crowds of people cheering on as a poster of Bashar is ripped from a government building in Hama. Al-Watan referenced “attempts” to bring down a statue of Hafez in Homs, but according to their sources, these attempts were unsuccessful.

Before March 2011, YouTube carried only a handful of videos that criticized the Syrian regime, much less any depictions of Syrians tearing down posters of him. Now, the site is replete with dozens of clips featuring scenes of protest that many had thought impossible. While the repository of videos might not be safe from removal attempts by regime supporters, the presence of the videos online is a challenge to the visual legacy of the regime.

Below is a selection of several videos of Syrian protests targeting symbols of the regime For a more complete collection, see here.