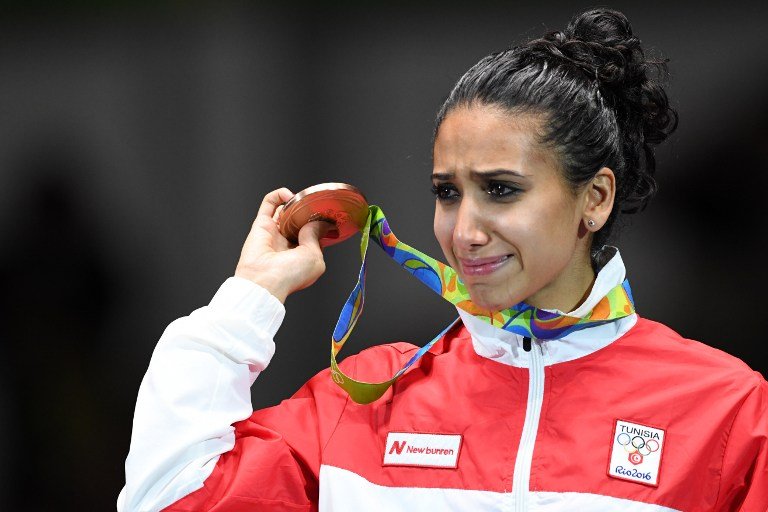 Tunisia's bronze medallist Ines Boubakri cries on the podium during the medal ceremony for the women's individual foil fencing event of the Rio 2016 Olympic Games at the Carioca Arena 3 in Rio de Janeiro on August 10, 2016. / AFP PHOTO / Kirill KUDRYAVTSEV

TUNIS—In honor of the closing ceremonies of the 2016 Olympic Games yesterday, we are revisiting Tunisia’s good and bad moments. Tunisia’s star-struck media veered dramatically to re-center the spotlight on three unlikely bronze medalists, whose groundbreaking performances outshone national heroes. Here is our analysis:

Ines Boubakri capped off the fencing team’s impressive sparring throughout the tournament with a bronze medal. Giving Tunisia its first medal of the games, Boubakri’s victory prompted a collective exhale. She made history as both the first African and the first Arab woman to win a medal in fencing.

Wrestler Marwa Amri was awarded bronze in the 58 kg event, becoming the first African woman to ever receive a medal in the sport. Amri, virtually unknown to Tunisians before her victory, brought Tunisia honor with its second medal of the games.

After performance well in the 80 kg Taekwondo event, Oussama Oueslati won a position on the podium. His bronze medal ensured that Tunisia would match the number of medals it received in the 2012 London Games.

In a national upset, celebrated athletes Oussama Mellouli and Habiba Ghribi failed to deliver any medal-winning performances. Both became pioneers in their respective sports at previous Olympic Games. Mellouli’s highlights include winning gold for both the 1500 freestyle in 2008 and the marathon swim in 2012. He is the first swimmer to medal in open water and pool events in a single Olympics.

Ghribi, heralded by Tunisian media as the favorite to win her event, received overwhelming attention in anticipation of this summer. In the summer of 2012, her gold medal in the 3000 m steeplechase race brought Tunisian women their first Olympic medal.

Focus on the superstars excluded this year’s medalists from mainstream support. Both Amri and Oueslati publicly noted that they perceived a dearth of encouragement from the Ministry of Sports and Tunisian media. All eyes and their accompanying funds focused on Ghribi, Mellouli, and the country’s handball team—which also delivered an underwhelming record at 0-4-1. Although she holds no official position, Mellouli’s mother led the Tunisian delegation during the Opening Ceremony. Her presence unleashed widespread debate on social media. Detractors saw her march as blatant and inappropriate favoritism, citing her lack of an official coaching title or ministerial position. Mellouli responded decisively in defense of his mother. The national hero says her presence makes him feel more at ease.

As the dust settles in the aftermath of the Games, a few mistakes have become evident. Tunisia must traverse the boundary between rewarding its talented athletes handsomely and creating fervor over impossible reputations. The Sports Ministry is complicit in the narratives of Tunisia’s media that led to Mellouli and Ghribi’s deification. Instead of focusing exclusively on few select athletes, those who control conversations around sports must maintain perspective. This mistake forces unknown athletes to prove their merit without support, leaving the audience wondering: what could they have achieved if their country had rallied behind them?

Media’s proclivity to limit inarratives delivers an important message this Olympic Games. No athlete holds a monopoly on winning. Sports media may be better served by encouraging government to channel the youth current of athletic enthusiasm into public programs in fencing, wrestling, and taekwondo—only then can Tunisia produce another wave of successful athletes.

A version of this article was originally published in Tunisia Live.

Knowledge and Social Change: Impact of 40 Years of Health and Population Communication in Egypt