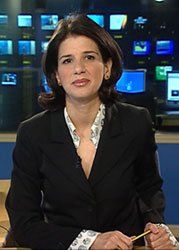 While TBS was visiting CNBC Arabiya, Cyba Audi was on the monitors all over the building presenting her show Kalam al Suq. Later we caught up with her for a chat.

TBS: Tell us what you were doing before?

Audi: At CNBC Arabiya I present two shows, Kalam al Suq ("Market Talk") and Jalsat 'Amal ("Board Meeting"). Kalam is unique in Arab television, because of its format. It has two anchors. One is market watching and the other covers different areas in the show. I am the market watcher; I look at the regional market as well as the international market. We cover the international market as an information service, including of course the foreign exchange. The aim is to go deeper into analysis of the regional market.

The show is daily. It starts at 2, runs from 2 to 3. We update the show at 5 o'clock. As far as the market coverage is concerned, it's always a new market. In the morning it's Asia-Europe, in the evening it's Europe-US.

On 'Amal, I co-anchor the show. We cover the companies in the region. We have a meeting or an interview, or a phone interview. We put up a screen, or a link.

Personally I am involved in producing the material that I present, with the support of the team.

TBS: The reason you can do this is your background?

Audi: Before coming here I was working as a private banker for Merrill Lynch from London. I covered Middle Eastern clients in Europe and from here. My duties were made up of selling Merrill products to clients, creating portfolios and managing them. I was with Merrill for five years and before that I was with a small private bank in London called Banque Francaise de Londres. I ended up being an account executive. I had originally joined as a trust specialist. I would advise clients on investment vehicles as opposed to where to invest.

TBS: How did you get into financial work?

Audi: I'm a graduate from AUB in 1986 with a degree in Business Administration. I grew up in Lebanon, where I also went to high school and university. In 1987, I got married fresh out of university, moved to London and didn't work for the first five years; I had two children. In October 1994, my husband and I went for lunch with the general manager of the Banque Francaise, who was a friend of his. They were looking for someone in relation to insurance investment. He gave him some papers and so I took a look at it and became interested.

TBS: How did you come to CNBC Arabiya?

Audi: I met Ward [Edmonds]. I was familiar with CNBC because at my work in London, I had CNBC on day and night. I relied on it as well as all the information I had. I had it on a screen at the corner of my computer. I heard from a friend that CNBC was starting an Arabic channel. Ward was going to this friend's office the next day. And that's how it happened.

TBS: You've been on the air now for 10 weeks. If you could, would you do it again?