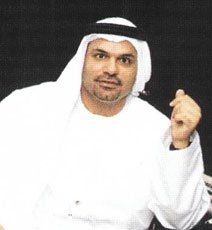 The last two times I met Ali Al Ahmed he was an important executive at E-Vision, Ittesalat's cable network, which to a great degree had to struggle from within a telecom rather than competitive broadcasting culture. I was struck at the time by his vision and obvious energy that I felt were restrained by the nature of the E-Vision operation. Now he has served for about one year as director of Abu Dhabi Television's Emirates Media Inc. and during that time the channel we think of as Abu Dhabi TV has flowered as a general channel, combining a particularly strong news department that provides eight hours of programming with some fairly unusual entertainment such as the extended, broadly cultural, nightly show Al Dunya. Yet Abu Dhabi TV-seemingly without effort-transformed itself from the moment the first bomb fell on Baghdad into a competitive 24-hour all-news channel, and its reports were competing with those of Al Jazeera for the attention and re-broadcast by global broadcasters.

Schleifer: How did you prepare to meet the sudden challenge of going over to an all- news 24/7 format the day this war began, and do so so smoothly, particularly since your own portfolio as director includes three channels reporting to you - Abu Dhabi Sports channel, which has been a remarkable regional success, the Emirates Channel, which is more GCC regional than pan-Arab, and finally Abu Dhabi TV, which over the past year or so demonstrated strong capabilities in the field of news, but nevertheless was a general channel, and now suddenly its all news, and getting lots of global attention.

Al Ahmed: We decided a couple months ago that Abu Dhabi TV had to be capable of going 24-hours as a news and public affairs channel on instant notice and that took a significant amount of work that wasn't particularly visible, but was going on. None of it showed, but it was there, getting everything in place so that on immediate notice we could swing over to this all-news 24-hour format.

That was possible, just like all of the other developments in this channel that have given us a unique position in Arab satellite broadcasting, like developing the daily show Dunya or one of the biggest game shows-The Chair-those developments as well as this our latest development were possible because of the vision of Sheikh Abdallah (Abu Dhabi's minister of information) and his ambition to bring the channel up to its fullest potential, and because we function here as a team and in particular the role in that team of my deputy Mohamed Dourrachad.

Schleifer: Was this preparation for an all-news channel in the event of another Gulf War reflected in some of your most recent recruitments?

Al Ahmed: Yes, the human factor is the most important for success. But we also took major steps on the technical side, like acquiring SNGs and planning on using people who were working in other departments, on shows, and having them ready to jump in, so we could put all our resources in one direction. Three months ago we could acquire the necessary equipment because we had planned by then how many cameras and crews we would need for every conceivable location. And we also recruited as much a possible within our own staff. Our reporter in Basra is an Iraqi sports reporter and he is doing fine.

Schleifer: When you made that decision, six months ago, to be ready to go all-news in the event of a war, there was only one serious Arab satellite all-news channel-Al Jazeera. To what degree is Al Jazeera your model.

Al Ahmed: We are covering the war, and Al Jazeera is covering the war but the way we cover it is different. People everywhere are calling in to say you are giving us a different angle. First of all we don't, we handle the news as we see it. We don't chase after somebody else's model. We don't say, okay that worked for Al Jazeera so we should do the same or look the same or sound the same. Our viewers sense that it isn't as if they are getting different news do much as they are getting a different perspective.

Yesterday somebody asked why we don't express more sympathy for the Iraqis and I said when I cover the news I am first and foremost a journalist. Its not my job to convince viewers about one side or another. I bring the news and try to analyze it from different viewpoints. But I am not going to tell the viewer what to believe in. When it comes to news, we won't compromise on professionalism. When it comes to analysis, we are very fair; when it comes to our sensibility as Muslims and Arabs we are realists. I think the dividing point is this. As an Arab, as a Muslim we are very sensitive to so many issues, but when I function as a journalist, I am going to present the facts and the people will decide what to believe in, because the second I try to manipulate them, by words or picture, I will have failed as a journalist.

Schleifer: Does the fact that you are government-funded hinder your ability to function that way?

Al Ahmed: BBC asked us the same question. How can you be government-funded and yet have such credibility. And I pointed out that actually government funding gave us an independence we might not have if we were totally dependent upon advertising.