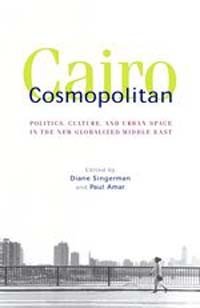 In Cairo Cosmopolitan editors Diane Singerman and Paul Amar draw on an international field of contributors clustered in the disciplines of architecture, sociology, anthropology and geography to study contemporary changes in Cairo’s people, its physical space and the global causes and consequences of these trends.  What emerges is a detailed, sensitive and wide-ranging look at Cairo from an array of qualitative social science perspectives.

But beyond a study of Cairo and its place in the world, the editors bill the volume as the debut of the “Cairo School of Urban Studies” that will produce new interdisciplinary research agendas and methodologies.  The editors explain their vision as follows:

“This multinational, multidisciplinary Cairo School has aimed to forge a more nuanced, multi-level analysis of phenomena that strives to tie the mundane, common sensical, the everyday, and the local to global processes and flows without forgetting the geopolitics of war, terrorism, monopoly petro-capitalism, and resurgent Third World solidarity…. The Cairo School challenges disciplinary divides between comparative politics and international relations, between anthropology and political science, and between urban planning, geography and political economy.” (27)

A strength of this approach is its ability to live with ambiguity and multiple overlapping possibilities: “The Cairo School is comfortable with a certain amount of ambivalence in its representation and analysis of Cairene life” (24).  But while successfully keeping theory from interfering with description of the city’s complex realities, this embrace of ambiguity comes at the price of some analytical clarity.  Contributors often seem to approach the book’s key concepts such as “globalization” or “cosmopolitanism” using completely different definitions or underlying assumptions in spite of attempts to forge a shared understanding of these terms in the introduction.

Even with this emphasis on complexity and ambiguity, several interlocking trends sharply emerge from the volume’s nineteen studies.  A central theme is the flight of Cairo’s elites from the central wust al-balad area and their resettlement in areas far from the city center made available by massive desert reclamation projects and the construction of a new highway encircling the city.  Contributor Eric Denis asserts the growth of private developments with names like Utopia, Beverley Hills and Dreamland is “completely in tune” with the neo-liberal economic policies enshrined in Egypt’s 1991 structural adjustment agreement with the IMF and World Bank (49).  Denis also identifies a discourse of danger and risk, stoked by inflated fears of terrorism and crime, that motivates and legitimates the upper class retreat to far-flung gated communities.

As the volume develops, we see how these shifts in elite preferences reverberate – in often unexpected ways – through the economic patterns and physical space of Cairo.  Several contributors describe how laborers and service workers employed in the new desert developments must choose between living in illegal but state-tolerated ‘ashwa’iyat (shantytowns) and making long daily commutes from their homes.  The volume also links these settlement patterns to changing uses and valuations of central sites.  While Williams and Elsheshtawy raise serious questions about the construction techniques and population resettlements used to ‘restore’ Islamic Cairo into tourist-friendly sites, El Kadi and ElKerdany argue that the concerted lobbying campaigns by Egyptian private citizens and NGOs to protect and restore belle époque era buildings is a sign of a strengthening civil society.

Several contributors trace changes in media production and consumption that accompany these shifts.  Walter Armbrust’s study of cinema attendance describes the theatre as a semi-private space where youth experiment with a range of rebellious behaviors.  Armbrust also charts the steady decline in youth movie attendance linked to shrinking middle class incomes and the replacement of centrally located mid-priced theatres with luxury facilities catering to foreigners and Egyptian elites.  Farha Ghannam’s chapter titled “Keeping him connected” is a deeply personal ethnographic account of how an Egyptian working in Kuwait is able to stay tied to his family.  He sends not only wages and gifts back to Cairo, but also audiotapes containing news from abroad, the latest Kuwaiti pop songs and jokes, as well as detailed instructions about how his remittances are to be used to renovate his family’s apartment and a nearby flat for his return to Egypt and marriage.  Taken together, these chapters are a poignant reminder that media globalization is not just the domain of satellite television and mobile phones; it also involves changing consumption patterns of existing technologies.

Cairo Cosmopolitan is at its strongest when it uses anthropology to illuminate less-studied aspects of Cairo’s contemporary development and their global implications.  At times, however, the mainly qualitative “Cairo School” methodology promises more than it can deliver.  One of these is Eric Denis’s attempt to link the rise of Cairo’s gated desert developments to Egypt’s 1991 structural adjustment agreement with the IMF and World Bank.  Much more substantial documentary or statistical evidence would be needed to back this claim convincingly, which is instead supported by an argument that both projects shared the same general discourse of “privatization.”  This argument glosses over Egypt’s long-term historical trend towards desert development projects, many of which preceded neo-liberal economic policies in the country by decades.  It also remains to be seen whether the broadly-conceived “Cairo School’ will be taken as a bold new direction in urban studies – a field that already embraces qualitative methods and multidisciplinary inquiry.

This aside, Cairo Cosmopolitan sets the tone and the standard for future work on the relationship between Cairo’s people and its urban space.  One can only hope that Singerman and Amar’s planned follow-on volume titled Cairo Hegemonic, which will examine the state’s role in urban planning and society, will be as insightful as this one.