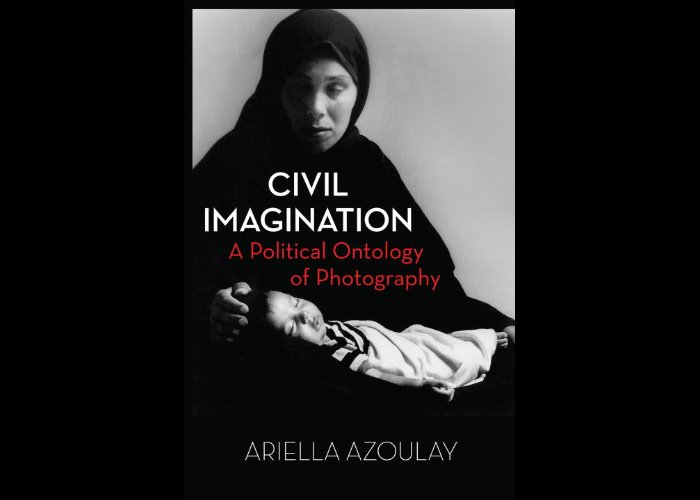 In Civil Imagination: A Political Ontology of Photography, Ariella Azoulay, Professor of Comparative Literature and Modern Culture and Media at Brown University, interrogates issues of visual culture, in particular photography, the role of spectator-critics, body politics, and citizenship. She argues that the boundaries of “the aesthetic,” “the political,” and “the civil” perpetuate power relations of nation-states and exclusions.  Azoulay exemplifies her argument through the lens of the Palestinian struggle, in particular the classification of Palestinians as non-citizens, ultimately compelling readers to rethink the concept of citizenship. Azoulay’s argumentative purpose is for spectators and critics of photography to “see themselves as citizens” who have “the ability to imagine a political state of being that deviates significantly from the prevailing state of affairs” (p. 3). Azoulay calls on readers to critique current civil discourse and redefine political imagination as transcending “the individual mind,” existing “between individuals,” and shared by all, thereby creating space for the civil imagination (p. 5).

Azoulay argues that historically there has been a tension between “the political” and “the aesthetic” of photography (p. 29). For example, Azoulay suggests that Walter Benjamin contributed to the institutionalized dichotomy “between the political and the aesthetic” (p. 30). Azoulay critiques Benjamin’s articulation that, “the political” and “the aesthetic” are mutually exclusive (p. 30). In contrast to Benjamin’s understanding, Azoulay suggests that “the political” and “the aesthetic” are beyond mutual exclusivity and the either/or dichotomy. On these two axes photos are constituted through two traditions of transmission. The first transmission is to protect art as a “closed unit that must be preserved outside the economy of transmission.” (p. 41) The second transmission is the “duty that spectators have to preserve art.” (p. 42) With these two axes working together, Azoulay argues that “every image is ontologically part of the aesthetic domain” and that “every image results from the actions of multiple participants who play various roles in its production and dissemination.” (p. 55)

Azoulay critiques Roland Barthes’ argument that photographs are representations and Hannah Arendt’s argument that there are distinctions between the public and private domain (p. 138; 222-223). Azoulay argues that seeing photos as representations subordinates events to phenomena or situations, reducing them for example to “refugees” and “torture”, and subordinates photos to “polarized relations such as inside/outside, photographer/photographed person, spectator/ subject of observation.” (p. 223) Analyzing images of Palestinians, Azoulay critiques polarizing relations and distinctions of the private and public domain. Distinguishing space between the private and public domain, according to Azoulay, is problematic because it creates delineations based on body politic by those who bear privileged citizenship and “imagine the body politic in which they subsist to be free of difference since the members of this privileged caste belong to the same race, ethnicity, or religion” (p. 138). The result of such distinction is that sameness is associated with the public domain while difference is associated with the private domain, which is then used by those who bear privileged citizenship to neglect and not recognize their responsibility for those individuals considered non-citizens, non-governed, refugees, stateless or displaced persons (p. 138). Through a variety of texts and themes Azoulay walks readers through a complexity of issues related to photographed public domain and compels readers to critique their own gaze.

Ultimately, dividing lines construct a flawed conception of citizenship through divisions of citizens and non-citizens. In order to resist such structures, Azoulay argues that photography is borderless, ownerless, public, and provides the space for which power and authority do not reside (p. 243). It is within the borderless space of photography that private spaces and public spaces become one, dismantling the existence of such space distinctions (p. 244). The civil imagination is a “new form of intervention” that assists “privileged citizens to identify and acknowledge their inherent flaw in citizenship, a flaw that makes them accomplices to the crimes of a regime that does everything in its power to keep from appearing to be criminal.” (p. 245)

While Azoulay’s chapters are thorough and developed, an analysis of how such concepts may be applicable to digital media and photography is lacking. In a fast-paced digital world, images can and are quickly ‘clicked’ through. Azoulay’s analysis accounts for how a spectator may engage in the civil contract of photography by holding and seeing an image. However, engagement is altered when technology and digital screens are part of the process of interacting with a photo. Despite neglecting the connection between today’s digitality and photography, Azoulay provides readers a developed continuity for the political ontology of photography.

Azoulay’s choice of texts; of individuals living within the Palestinian Authority who are often considered non-citizens by the nation-state, suggests a critique of visual culture, in particular photography, the role of spectator-critics, body politics, and citizenship. Readers will value Azoulay’s argumentative advances as she thoroughly explains and articulates her Civil Imagination for the political ontology of photography and appeals to a vast audience of media, rhetorical, visual culture, and critical/culture studies scholars. Media scholars interested in visuals, in particular photos, citizenship, and community will find that Azoulay’s theoretical frame offers remarkable insight, in regards to scrutinizing photography and citizenship within public discourse. Media scholars will appreciate this treasure trove insight, which illuminates and compels readers to analyze and theorize the rhetorics of photography, the body, and citizenship through a new heuristic vocabulary.

Kiranjeet Kaur Dhillon is a Ph.D student in the Department of Communication at the University of Wisconsin-Milwaukee.

Excerpted from Information at War: Journalism, Disinformation, and Modern Warfare To be published by Polity …