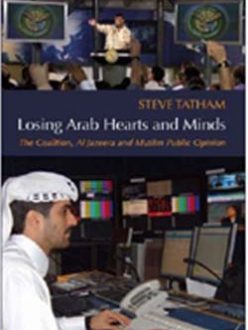 Having served as the Royal Navy’s public spokesman in Iraq, Steve Tatham straddles the journalist/military divide and offers an insider’s perspective on some of the challenges posed by relations between the media and the military. He thus adds to the burgeoning literature on the Iraq war and its fallout, particularly media coverage of the war and the Coalition’s public diplomacy efforts that accompanied and followed it.

There is much of interest in the book to both specialists and a general readership. Tatham not only describes many of the dilemmas faced by the military, such as those relating to security and controlling news of casualties, but also those faced by the media. These include the issue of access to information, the need for footage to fill 24-hour news channels, and the onus of appeasing governments and winning audiences in wartime. He is sympathetic – sometimes to a fault – towards the Arab media, which he writes was denied information, excluded from briefings, and at times vilified by the U.S. authorities. He addresses the problems engendered by Arab satellite television coverage and U.S. attitudes, and shows how responsibility for them usually lies with America. For example, Arab media came under Coalition criticism for focusing on civilian casualties during the war, but Tatham explains how such coverage resulted from limited access: since the Arab media were not embedded, they focused on what they could access – often civilian casualties – in order to fill airtime. Another example is the broadcasting of pictures of dead or captured Coalition servicemen, a practice for which Al Jazeera was criticized. Tatham points out that U.S. officials discarded any concerns about inflammatory coverage when it suited their goals, such as when they readily released pictures of the corpses of Saddam’s sons, Uday and Qusay. Arab media were treated in accordance with the Bush administration’s with us or against us policy.

With a discernible undertone of remorse over opportunities lost, Tatham has harsh criticism of the Coalition’s failure to handle the Arab media. He especially takes U.S. forces to task for hopelessly underestimating the importance of effective communication with the Arab media so as to reach Arab audiences and win ‘the battle for hearts and minds’ that he deems so crucial to the war effort. To him, it was U.S. arrogance, and hostility towards and misunderstanding of the Arab media – particularly Al Jazeera – that precluded effective military-media relations. In fact, Tatham’s central thesis is that had the Arab media been properly addressed, briefed and informed by the Coalition – as were Western media for the purposes of conditioning domestic attitudes towards the war – Arab hearts and minds could have been won.

Tatham cites many voices from all parties to support his argument, making a strong contribution to correcting the record on Al Jazeera, especially in the wake of the negative publicity directed against the channel by American officials after September 11th and during the continuing war in Iraq. He is strong on military strategy and media management, but less so on specifics of the Arab world and the Arabic language – the latter an inessential subject to his argument. Others have made the point that the U.S. could improve its public diplomacy by addressing Arabs via existing Arab media, rather than seeking to compete with regional media by creating the likes of Al Hurra. The issues of American public diplomacy and the need to understand Arabs on their own terms have been stressed by others writing in this field, notably Marc Lynch in Voices of the New Arab Public: Iraq, al-Jazeera, and Middle East Politics Today, and former ambassador William Rugh. Yet it is difficult to imagine how any media strategy alone could have prevented the loss of favorable Arab public opinion during the war.

Laura Smith is an M.Phil. candidate at the University of Oxford, has a BA in Arabic and Islamic History, and worked as an Arab media analyst at SOAS.