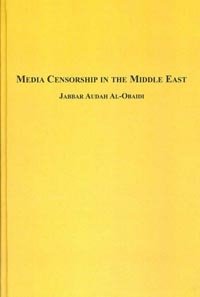 This slim volume by Jabbar Audah al-Obaidi promises to address questions of media censorship and the techniques used to bring it about in the Middle East.  It delivers a spirited argument summoning the need for an open and unfettered media environment across the region.  Identifying an insular and regressive culture as well as poor socioeconomic development as evidence of past failures, al-Obaidi calls on authorities to alter policy in an effort to advance their societies and engage citizens.  He sees this as beneficent to regime and populace alike and claims that advances in information technology make constitutional, security, and political brakes on media expression and consumption untenable moving forward.

Al-Obaidi would have been more persuasive had his examination incorporated the many critical analyses examining Arabic language media that have emerged in recent years. Absent any engagement with such recent scholarship, he brazenly states, “…information and data on this issue are both nonexistent and scarce.” (11-12)  Moreover, this text was poorly edited, and the grammatical, word choice, and spelling errors run the risk of distracting readers from the substantive issues engaged in his analysis.  Additionally, the volume is characterized by its imprecision, especially in its unwillingness to clarify terms or to place the processes al-Obaidi describes in the context of the authoritarian state apparatus prevalent across the Arab world.  Finally, it is at times unclear what time period al-Obaidi is addressing, as repeated references to a bi-polar world are undermined by contradictory claims addressing the post-Cold War global expansion of liberal humanitarian agendas.  In al-Obaidi’s exposition, references to the importance of new communications technology used elsewhere in the world following the end of the Cold War are left disconnected from the experience of the Arab world.  Furthermore, he argues that the advances of the post-Cold War, American-centered liberal order, have yet to fully penetrate the Arab World because of state- and elite-supported censorship and the sociological limitations of Arab culture.

Divided into five chapters, al-Obaidi’s book begins by examining the relationship between the people of the region, media production, and its political elites.  Curiously, the first chapter begins with an extended examination of definitions and conceptions of the Middle East region, Arab nationalism, and cultural generation, all of which are left unconnected to the current Arab media environment.  This misconception emerges repeatedly throughout the book, for al-Obaidi is not discussing media in the Middle East but rather that of the Arab world.  Moreover, his empirical examples emerge almost solely from the print media of Yemen and Jordan.  Despite his focus on such narrow sources, he nevertheless provides comprehensive normative claims assumingly applicable to all Arabic language media without differentiation.  Al-Obaidi’s analysis suggests that the media is somehow disconnected from schools, the military, the public sector, and other socializing institutions, ultimately conflating propaganda with censorship.  Al-Obaidi’s account implies that public acceptance of such media content is informed by an essentialized portrayal of Arab society.  For support, Obaidi relies on the sociological characterizations of Raphael Patai’s 1973 work The Arab Mind.  Emerging from the ‘national character’ genre of writing popular in 19th Century anthropology and then comparative politics around the middle of the last century, The Arab Mind is emblematic of a bygone era of scholarship focused on the notion of a personality archetype.  Obaidi employs such characterizations often, blaming high illiteracy and low levels of education across the region, which he argues prevent citizens from distinguishing state propaganda efforts or critically evaluating media content.  Moreover, he frames this as a contest between modernity and “a Middle Easterner’s way of thinking.” (4)

Chapter 2 provides an argument in favor of the exceptionalism of the Arab state.  He arrives at this conclusion through a discussion of the tactics, techniques and censorship practices of Arab states.  Al-Obaidi argues that regimes employ a “top down model of communication” that forces people to exercise “blind obedience.”  (38)  Absent in this discussion is any engagement with the work of scholars who demonstrate ways in which political and social power produces knowledge and how knowledge itself constitutes power relations.  Moreover, portraying citizens as blindly obedient and in reverence of their regimes ignores the important works of scholars such as Lisa Wedeen and Eric Davis, who have demonstrated how Syrians and Iraqis, respectively, recognized the disciplinary aspects of media production (as well as the broader societal phenomenon utilized by the state) and sought to undermine them.[i]  No such experiences appear in al-Obaidi’s rendering of Arab society.  Instead, he provides an unsourced and unexplained table of data entitled “Censored Topics in the period of 1986-1996” asserting the top down model.  (39)  He then examines the modalities of the press theorized by Frederick Siebert in 1963, and, in spite of the powerful pressure by regimes and state apparatuses across the region, concludes that an improved media culture willing to explore and present opposing views is now emerging across the Middle East.

In Chapter 3 al-Obaidi describes the muzzling of various Middle Eastern media through an examination of the closures, prosecutions and human rights abuses meted out to journalists.  The array of persecutions and abuses clearly ground his call for a free media, highlighting the need for such a vehicle to bring about progress and socio-economic development across the region.  His reader cannot ignore the state-sponsored oppression directed at those in the media who express opposition to regime practices.  A strong normative claim about the role of media girds al-Obaidi’s connection between the liberal democratic society he believes can emerge in the region and serves as a segue to Chapter 4, where he details the constitutional and de jure status of free expression across the region.  This section provides insight and a historical basis for both the absence of constitutional protections for media and free speech across the region and the ways in which the architecture that does exist could be rallied to bring about such protections in the future.  In this chapter, for the first time al-Obaidi characterizes media markets by dividing the region’s media into four typologies.  This examination will prove the most valuable contribution to al-Obaidi’s readers.  It grounds emergent media within a historical context, and, regardless of readers views on al-Obaidi’s previous essentialized characterization of Arab media consumption, his argumentation now expands to incorporate the potential for the regions ever-growing media production.

Concluding with an outline of his plea for a more liberal and open media future across the region, al-Obaidi’s argument is now further refined.  Earlier itinerations are now added to the salve of various platforms of information technology.  The censorial political culture of professional journalists aside, al-Obaidi sees exhibitions of self-censorship as increasingly rare in a youth culture enamored with information technologies.  How such social networking and multicultural exchanges are immune from state censorship is left unaddressed.  The reader is left to ponder the impacts of such technologies and al-Obaidi’s confidence that the cultural breaks he seemed so convinced of in earlier chapters will now be swept aside.  Likewise, he is also confident that incentives for authorities are seemingly self-evident enough for them to be motivated to abandon authoritarian models in a newfound commitment to the common good.

John Measor is Visiting Professor of Middle East Studies at the University of Montana.