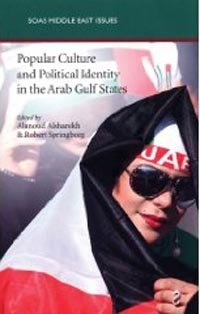 The premise of this collection of essays edited by Alanoud Alsharekh and Robert Springborg is a simple one: indigenous Gulf[i] culture remains peripheralized in the broader study of popular culture in the Arab World.  Indeed, this is not merely an academic bias, but one that is reflected in the relative lack of Gulf cultural penetration of the region.  This marginalization of Gulf culture tends to be reinforced by two contradictory stereotypes of the region.  First, that it is a backwards region defined by tribalism, and second, that cosmopolitanism has undermined traditional culture (9-10).  This collection of essays aims at confronting these stereotypes and engaging key questions of identity and culture in the contemporary Gulf.  To do so, the contributions are framed by four overarching themes: the historicization of contemporary Gulf identity that links the region with its pre-oil past; how states foster collective memories of shared pasts; contemporary cultural expressions; and, finally, the implications of a dynamic regional popular culture on political cohesion, identity and authority.

Lawson and Naboodah begin the collection with an engaging chapter on the attempts by the United Arab Emirates (UAE) government to preserve and display its cultural heritage.  The authors detail a series of exhibits, symposiums and historical projects that they claim reflects a nascent nationalism in the UAE.  Nadia Rahman discusses an oral history project, which is a part of these government efforts.  Her contribution offers personal stories of elderly citizens of the UAE.  The narratives of this older generation suggest both nostalgia for the simplicity of the past, and a pride in contemporary realities, including rapid economic development, growth and modernization.

Similarly, Khalaf’s contribution on Kuwait’s pearl diving heritage details Kuwaiti government attempts to (re)construct and (re)invent Kuwaiti identity through the annual Festival for the Commemoration of Pearl Diving and the celebration of the Kuwaiti Seaman’s Day.  Through illustrations and personal narratives, Khalaf argues for the importance of these events in constructing a contemporary Kuwaiti identity.  Mohammed Alkhozai provides another example of government led efforts at fostering collective identity.  His chapter focuses on the cultural restoration efforts of the Bahraini government.  Alkhozai uses before and after images to describe the restoration projects of five monuments: the Portugese Fort, Arad Faort, Riffa’ Forty, Sheikh Isa’s House and Aljasra House.  These projects, he argues, have been central to Bahraini cultural development.  Rich with visual aids, these three contributions are highly successful in demonstrating how government sponsored projects attempt to wed past and present, and in turn, how these are used to construct a contemporary national identity.

While the previous chapters stress the importance of the past in the construction of modern Gulf identities, the next grouping of essays deal with indigenous Gulf cultural expressions.  An attempt is made by the authors to ground these expressions in a specific Gulf vernacular and identity.  We find here excellent contributions on the centrality of football to forging cultural identities, and on the role of media in projecting a uniquely Gulf identity and culture to the rest of the world.  These two chapters are slightly overshadowed by the excellent chapter on Gulf poetry by Nimah Ismail Nawwah.  In this chapter, Nawwah introduces readers to a series of personal poems that deal with major social, political and cultural issues, including Palestine, the role of women, marriage and divorce, and freedom.  These poems are used to convey to the reader the array of issues that shape contemporary Gulf poetry.  Nawwah’s poems are powerful, insightful, and a wonderful addition to the book.

The final three chapters engage critical questions about economic reform and democratic participation in the Gulf region.  Davidson’s chapter comparing Abu Dhabi and Dubai highlight the differential impact of economic development on national identity.  He provides a nuanced discussion of the impact of economic diversification on the relationship between political stability, economic growth and national identity in the two emirates.  This theme is taken up in the next chapter that similarly addresses debates about political reform.  Both contributions strongly suggest that economic growth and limited political reforms have had little impact on the distribution of power within the Gulf region.  Yet, paradoxically, economic growth and political reforms have profoundly impacted the constitution and negotiation of national identities.  This suggests a continued tension between the ‘ruling bargain’ and the assemblages of political-economic power on the one hand, and socio-economic transformations, on the other.

Overall, the ten chapters successfully contribute to highlighting the intersections of popular culture, political economy and political reform in the region.  The most salient aspects of this collection are those that ground discussions in the social and economic fabric of the Gulf region.  Illustrations, poems and analysis of government programs provide readers with a nuanced discussion of the transitions between the region’s pre- and post-oil identities and how these manifest in local contexts.  The contention that popular culture and national identity in the Gulf are the products of these transitions is the most powerful argument of the book.  Moreover, one of the subtle implications of the book is that the Gulf is not merely a consumer of popular culture, as is widely believed, but is itself a vibrant space for cultural expression.

One drawback of the volume is its short length that leaves many questions and areas of inquiry unresolved and insufficiently dealt with.  The final chapter, for example, is a short, 8-page survey of key social and economic indicators of the region.  This should have appeared at the beginning of the collection or been omitted altogether.  Other chapters, while reviewed positively above, nevertheless read more as conference notes than structured essays.  This does not, however, deflect from the relevance of this book to the study of popular culture and national identity.  The contributions are successful in suggesting the need for extracting the Gulf from a broader survey of Arab or Middle Eastern popular culture and identity.  However, there is a great deal more research that needs to be conducted on indigenous Gulf culture for this separation to be complete.  The contribution is an excellent and timely move towards this.

[i] In this volume, the Gulf refers to Bahrain, Kuwait, Qatar, Oman, Saudi Arabia and the United Arab Emirates.