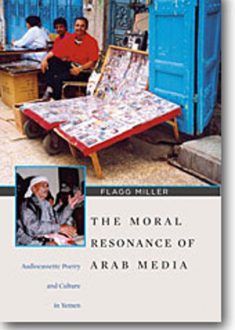 Flagg Miller’s painstakingly researched work is an ethnographic and historical inquiry into the intersections of media technologies, discourses of political engagement, and Yemeni poets’ “struggle… to craft moral authority [and] to promote and preserve their relevance for contemporary audiences” (p. 2). At 525 pages (including appendices with translations, transliterations of some poems discussed and exhaustive endnotes), it takes some dedication to complete. Nonetheless, it bears ample rewards for the patient reader, particularly for advanced students of Arabic literature, media studies, linguistic, social and communication anthropology, comparative political theory and public sphere studies. It is thoroughly grounded in, and makes important rejoinders to, the theoretical literature of most of these fields.

If Steven Caton’s well-known ethnography[1]on oral poetics and its political efficacy in face-to-face tribal communities in northern Yemen can be seen as a largely synchronic analysis, Miller picks up where Caton leaves off, adopting a broader perspective and a more diachronic approach to poetics and media. Focusing on audio-cassette poets and singers from Yafi‘ in southern Yemen, he seeks to link “modes of social subjectivity to historical shifts in media practice” (p. 454). Moreover, he offers a nuanced reading of such shifts by exploring how Yemenis understand the ethical valences of different kinds of media, particularly the visual and the sonic, the graphic and the oral, and their various re-combinations, and how they deploy them for rhetorical purposes.

Noting that rural Yemenis are increasingly mobile, migrating to urban areas and abroad in search of work, and that even tribal poets are increasingly literate and well-read, Miller suggests how they respond to and incorporate ideologies as diverse as resurgent tribalism, radical Islam, socialism and nationalism in their works. He shows that the composition, circulation and consumption of socially-reflexive oral poetry continues to be enormously popular, facilitated but also transformed by new media, and that certain poetic genres are a sophisticated form of political discourse, projecting a composite style which he calls “metropolitan tribalism” (Chapter 2). This concept exemplifies this book’s most significant contribution: blurring the traditional binaries common in Middle East scholarship of the tribal versus the metropolitan and, analogously, cultures of orality versus writing.

Miller sets the stage by presenting an overview of shifting media practices in Southern Arabia over several centuries, from a situation of restricted literacy before the mid-twentieth century to increasing literacy following the rise of modern education and literacy campaigns after that date (Chapter 2). He then documents the rise of an audio recording industry in urban areas, and the subsequent ‘democratisation’ and wide dissemination of recording technologies with the arrival of the audio-cassette by the mid-1970s (Chapter 3), close on the heels of Yemen’s independence in 1967.

He examines in depth one genre of cassette poetry, the bid‘ wa jiwāb (‘initiation and response’) qasīdah, a poetic form involving a dialogic exchange between two poets. He demonstrates that this practice, today recorded orally on audio-cassettes, actually originated in a centuries-old written, epistolary form of dialogue between members of religious and political elites in the era of restricted literacy. In Chapter 2, he shows how practices and markers of writing are integrally implicated in this oral and aural genre. Through meticulous interpretations of several poems, he shows how the conventional thematic sequence of the qasīdah oscillates between markedly ‘written’ and markedly ‘oral’ styles. The fact that bid‘ wa jiwāb qasīdahs are written down before being recorded by professional singers, for example, results in the “dense intertextuality” of the response poem, and scarcity of stock “verbal formulas” which aid memory in oral performance (pp. 163-64).

Throughout the book, Miller traverses the spectrum from poets’ initial moments of composition, decisions about genre and its political implications (pp. 109-123), choices of vocabulary, images, rhyme and meter by poets and potential alterations by singers (Chapter 4) to the appreciation of cassette poetry by its audiences and its efficacy at political critique and generating discursive communities (pp. 107-8). He examines the diverse techniques poets use in order to establish authorship, which he sees as “an ethical discourse about the conditions of one’s credibility as a public spokesperson” (p. 454) and ultimately about social responsibility. He gives particular attention to how “tropes of public self-hood” (p. 453), including the “generalized singing tribesman,” “character,” and “personality” are developed in cassette qasīdahs and their responses (Chapters 4-6).

It is underscored throughout that writing and script and their physical and metaphysical attributes are also recurrent tropes in cassette verses. Crucial to understanding this process, argues Miller, is an understanding of how Yemenis correlate the sensory qualities of media with ethical problems and how these are discussed in a “metadiscourse” of media (p. 24). He, in turn, equates the visual and the sonic with “circulating” and “resonant” aesthetics, respectively, though his definitions of these two concepts are so complex and many-layered that they are difficult to summarise, and their explanatory usefulness is strained.

Indeed, Miller does himself a disservice by his dense and prolix prose, which conveys extremely subtle points at its best, but at its worst can obscure them. Anecdotal evidence from fellow academics suggests that his writing is not very student-friendly, which is regrettable given the richness of its content. One sentence – among many – over which I am still puzzling, reads: “Ideas of fixed and world-abstracted texts had long found germination at the explosive intersections of material accumulation and truth and were not solely epiphenomena of actual practices of writing” (p. 12).

Another problem is that, for an anthropologist who pays considerable attention to the way in which his interlocutors carefully construct their authorial credentials in their poetry, he is remarkably silent on his own bona fides. For anthropologists, these often include an account of one’s fieldwork in some detail and explaining how one gained privileged access to the social and intellectual lives of one’s informants. Although the “arrival narrative” may be a clichéd frame for ethnographic writing which has itself been subjected to scrutiny,[2]such an account nonetheless serves the crucial methodological and epistemological purposes[3] of suggesting how the knowledge – particularly the texts – presented were obtained, selected, classified, and interpreted; and the extent to which interpretation was collaborative, or the ethnographer’s own. Miller’s “arrival narrative” is limited to three pages, but he does outline various specific methodological techniques at intervals throughout the book, such as hours spent hanging out at cassette shops. However, although well into the book he states that he interpreted poems “with Yemeni colleagues” and hints that this could be difficult even for them (p. 184), he does not provide us with further detail, nor does he tell us much about the process of translation. If Miller had shed more light on the interpretive process in particular, he would presumably only have strengthened the persuasiveness of his exegesis.

This is a shame, because he is at his most engaging in his intermittent descriptions of his qat chews with Yemeni poets and singers and various dramatic events he witnessed, such as the unveiling of one poet’s famous cassette correspondent as his own alter-ego after his death. As such, his work remains at a rarefied, theoretical level, a little removed from the textures of everyday life. Providing more examples of how the composition or appreciation of cassette poetry were woven into daily activity might have been one way of avoiding such abstraction.

Overall, this is a rich, original and meticulously argued book that highlights the importance of close ethnographic attention to verbal culture for studying vernacular politics and subjectivity in a region where these are often fraught with misunderstanding.

Zuzanna Olszewska is a DPhil candidate in Social Anthropology at Oxford University, completing a dissertation on poetry and its social contexts among Afghan refugees in Iran.