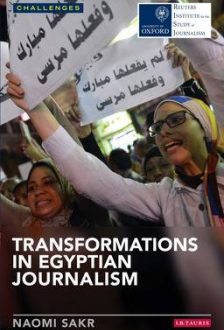 
The revolution that took place on January 25, 2011 in Egypt has left its mark on various facets of Egyptian journalism. This relatively short but timely book sheds light on the changes and developments witnessed by traditional print and broadcast media outlets, as well as social media in post-revolutionary Egypt, particularly during the military rule of the Supreme Council of the Armed Forces (SCAF). Sakr has done a decent job of highlighting the professional, ethical and legal challenges that confront Egyptian journalists during this volatile and unsettling phase in Egypt’s modern history.

The opening chapter in this five-chapter book describes the role of citizen journalists or, to use Sakr’s own description “unpaid news report[ers],” in covering the 18-day revolution. According to Sakr, the mainstream news media relied on “amateur cameraphone footage uploaded to YouTube and updates from Twitter” spread by online political activists “without professional journalistic credentials” (1). In this chapter, Sakr alludes to a serious contradictory environment that journalists faced during the year-and-a-half rule of SCAF: the continued curtailment of press freedoms instated by the regime of ousted president Hosni Mubarak on the one hand and the revitalization of the news media scene due to online activism and the explosion in the number of new satellite channels and hardcopy newspapers on the other hand. This “revolutionary energy” (19) has fueled journalists’ demands for drastic professional changes.

Chapter two refers to another interesting and critical challenge facing journalists in post-revolutionary Egypt: the lack of consensus on the standards and values that ought to govern journalistic professionalism. According to Sakr, the failure of Egyptian journalists to agree on universal professional norms was the outcome of two factors: the lack of consistency in dealing with the media under the Mubarak regime, which was characterized by “a puzzling combination of authoritarian and liberal features” (21), and the rise of social media activism and micro-blogging that has contributed to “blurring the distinction between media users and producers” (46). Almost half the chapter was unjustifiably devoted to what Sakr refers to as a “‘new breed’ of journalists” who had either paved the way for the revolution or played a critical role in covering it. Rather than devoting 16 pages to detailing the background of those journalists, the author could have further explained some of the critical aspects that were mentioned in passing in the chapter, such as the Kefaya (Arabic for “enough”) opposition movement or the “hybrid” media scene under Mubarak (21).

Chapter three discusses the various ownership and funding models that can possibly be adopted by the Egyptian print and broadcast media. The chapter also draws attention to Egyptian broadcasters’ unfamiliarity with the notion of “public service broadcasting” with its conceptual and pragmatic connotations. In this context, Sakr argues that “the very notion of ‘publicness’ was tainted by its long association [particularly under the regimes of late presidents Gamal Abdel Nasser and Anwar El Sadat] with the inefficient and discredited ‘public sector’ created in Egypt by wholesale nationalization” (64). In this chapter, Sakr provides a unique, valuable and succinct description of the Egyptian broadcasting assets and state-run media bodies, with a detailed, and more importantly, up-to-date description of their estimated workforces, budgets and debts. Sakr also discusses some of the important constitutional articles and amendments that have governed the Egyptian press, including the new Constitution that was passed by a national referendum in December 2012 under the government of the current Egyptian president Mohamed Morsi. Sakr is right on the mark when she alludes to the serious professional challenges facing the Egyptian Radio and Television Union (ERTU), the state-run organization that manages and oversees the operations of all government-controlled radio and television stations. Some of the challenges are enormous overstaffing (more than 43,000 employees, making it one of the largest broadcast institutions in the world) and nepotism, which permeates all departments and hierarchical layers at ERTU.

Chapter four discusses the need for union protection for Egyptian journalists and how its absence affects professional ethics, issues of governance and self-regulation. In this context, Sakr provides a much-needed background on the Journalists’ Syndicate, which was granted its legal status in 1970. Syndicate membership is open only to full-time, employed print journalists with a contract, thus excluding broadcast and freelance journalists. These membership restrictions, according to Sakr, “give any journalist wishing to obtain a contract of employment in order to qualify for Syndicate membership an incentive to prioritize an editor’s whims over the demands of professionalism” (76). In an effort to resist the Syndicate’s membership restrictions and to seek better and more flexible professional representation, some Egyptian journalists have formed alternative professional bodies, such as the Independent Journalists’ Syndicate and the Syndicate of Electronic Journalists. The chapter also discusses the need to create a diversity of independent regulatory bodies and ombudsmen to look into issuing a credible and operationalizable Code of Ethics convincing enough for journalists to abide by in their day-to-day reporting. According to the current Press Law, any Code of Ethics would be issued by the Higher Press Council, part of the upper house of Parliament, and which has been known for its support of the regime, not journalists.

The concluding chapter provides several urgent recommendations for the improved efficiency and functioning of Egyptian journalism in its current stage of transformation (as per the book’s title). Among the recommendations proposed by Sakr is amending the Penal Code that punishes journalists for “insulting…public officials” (92) in order to encourage investigative reporting and enhance transparency; preventing the ruling party (represented in the Ministry of Information) from intervening in the operations of public broadcasting; providing journalists with the right and freedom to start or develop any independent professional body without the need for parliamentary or governmental approval; and encouraging Egyptian journalists to join international journalism associations to share and exchange ideas in a way that would enhance their professionalism.

The book would have benefitted from providing a more elaborate historical description of the relationship between the government and the press during the rule of late presidents Nasser and Sadat and ousted president Mubarak. The dynamics of this relationship and the way the press was governed throughout the six decades preceding the January 25 revolution are critical to our understanding and assessment of the current status of Egyptian journalism. The author herself acknowledges this point by stating that “present-day idiosyncrasies of journalism in Egypt owe a great deal to historically specific structures created by state media monopolies under Nasser and by the partial, mostly false, liberalization measures taken under Sadat and Mubarak” (89). The two-and-a-half page timeline titled “Historical Background to the Rise of Egyptian Journalism,” which comes at the beginning of the book and which lists the events that contributed to shaping Egyptian journalism from the mid-nineteenth century until the beginning of 2012, was too brief to serve that purpose. Some of the events mentioned in this timeline needed elaboration within the book’s chapters.

Another aspect that could have strengthened the book is firsthand, personal interviews with some of the Egyptian journalists referred to throughout the book. The author relied on second-hand sources in which those journalists were quoted.

The book does not have an index, which would have served as a great source of guidance for readers who are unfamiliar with the names of the journalists and events highlighted throughout the book. One senses that the book was rushed to publication given the rapidly evolving state of Egyptian journalism. In a way, it is a snapshot of a very fluid situation, and that is both its main limitation and its main contribution. Overall, it is an interesting and timely addition to our understanding of the current state of Egyptian journalism, with all its challenges and opportunities.

Mohammed el-Nawawy is a Knight-Crane Endowed Chair and Associate Professor at the Knight School of Communication at Queens University of Charlotte, North Carolina.