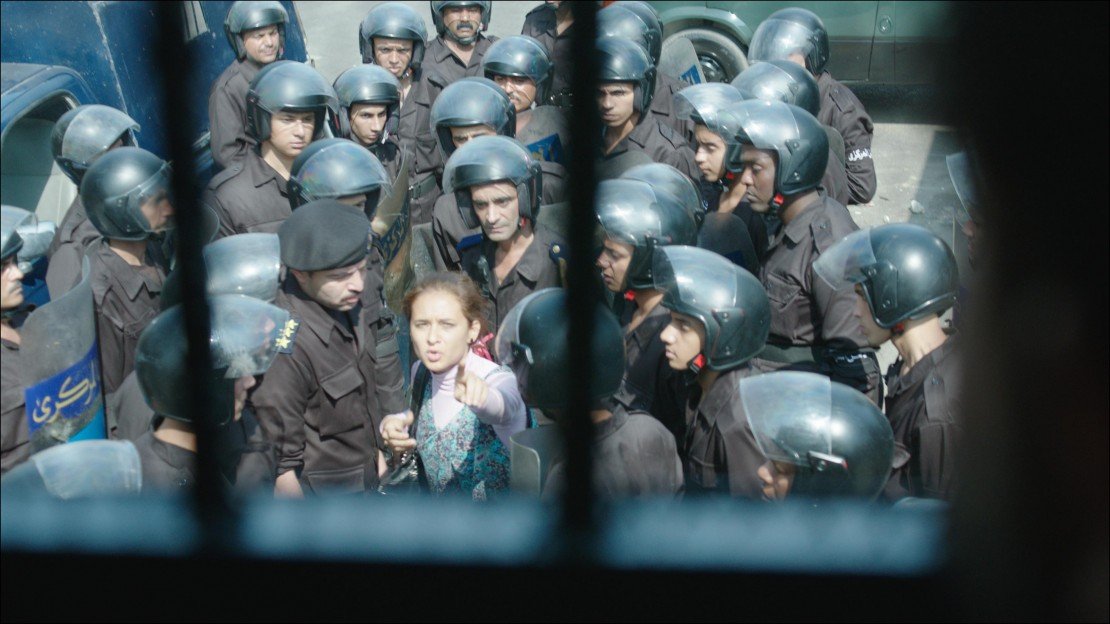 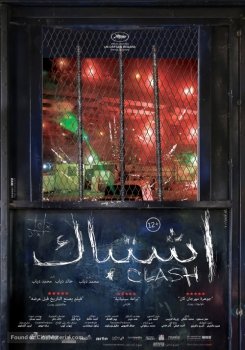 Eshtebak (Clash) defies convenient stereotypes of heroes and villains. There are no comfortable answers, and there is no feel-good storyline; it is unapologetically raw and gritty. Clash compels audiences to doubt their perceptions of conflict and political antagonism, a vexing challenge for an Egyptian public accustomed to propagandist narratives on talk shows controlled by security agencies. Its brave and jarring story unsettles even the most impenetrable centers of authority.
The film centers entirely on the eight square meters inside a Central Security truck packed with sundry political detainees; events occur within a single day. The backdrop is the factionalism and upheaval witnessed in the aftermath of an Islamist president’s ouster by his defense minister, when mass protests blanketed the nation.
Sparse personal narratives heighten the film’s intensity. The unabashed bareness and innovative camerawork situate audiences among the detainees; we, too, receive no reprieve from the claustrophobic space. In a pressurized conflict zone, the truck’s occupants are known at face value. Audiences connect with the humanity of the incarcerated protestors, only to later collide with the stark hatred, moral righteousness, and distrust that subsume their actions. The inhumanity and abuse also engender moments of empathy. Clash pushes us to confront often-senseless behavior without resorting to vilification.
A microcosm of Egypt is crammed into the truck. Security personnel confiscate identification cards and mobile phones. A photographer and an Egyptian-American journalist, both working for an international wire service, are the first to be hauled inside. When the journalist insists on his Egyptian heritage, he finds himself in shackles. Ultranationalist, pro-army protesters hurl rocks at the truck, believing the journalists inside to be akin to the Muslim Brotherhood, and they are arrested too. Shoved inside next are Muslim Brotherhood members and supporters demanding their president’s reinstatement.
Finding themselves unwilling participants, the journalist and photographer struggle to reconcile the impartiality their jobs demand with the gravity of their situation. Moral responsibility to report the facts cowers in the face of instinctual preservation. The photographer says, “As a revolutionary, I am willing to die for a cause, but not a photo.” And yet the departure from journalistic fairness creates a new role for the pair: the journalist and the photographer become embroiled in the story they are documenting.
Unstable fault lines between opposing camps define the conflict. In one instance, opponents of the coup who support the Muslim Brotherhood are excluded from its hierarchy because they are unofficial members. Core factions with stronger commitment to the official order are revealed, but the splintering leaves some individuals outside either camp.
Moments of understanding, both glimmering and appalling, break through the unrelenting enmity. When pro-army detainees confront Brotherhood loyalists, guards indiscriminately douse the truck’s occupants with a water canon. “So you’re going to kill each other and blame it on us,” a security officer grouses. In the stunned quiet that follows, a shared horror bears on the soaking detainees. Light moments of humor later breach the sweltering, suffocating, and fetid confinement. Laughter echoes; conversation begins; commonalities are found. 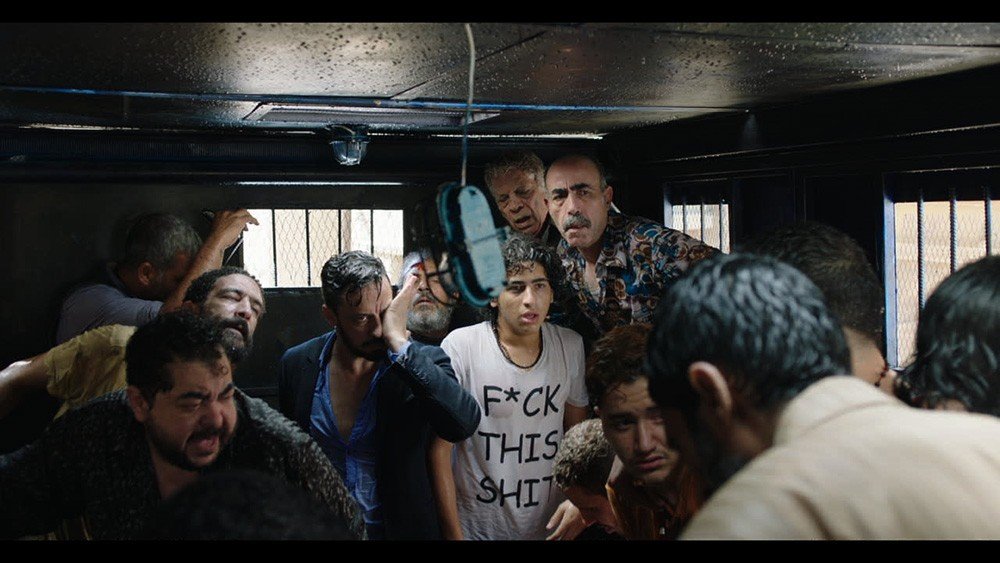 Within the truck’s ecosystem, the tenants seek relief from the heat by taking turns standing at the barred windows and gulping water from a single bottle. Overwrought tension gives way to communal action as they identify with others across affiliation. The truck’s men turn their backs to give a terrified young woman a moment of privacy, and detainees echo calls searching for family members to passing security trucks. Still, compassion is not enough to withstand the violent confrontations brewing outside.
Group loyalties and human empathy chafe against one another. When his friend’s humanity interferes with duty, a security officer shoves the sympathetic colleague into the truck beside the detainees. Although adherence to rules unifies conscripted officers, three men defy their positions by attempting to free a mother, her son, and a teenage girl. No one is able to carry out his promise.
Clash offers many layers of allegorical meaning, allowing audiences in more censored environments to draw their own conclusions. As a result, Egypt’s regime defenders began to assail the film and its makers as Clash won accolades at the coveted Festival de Cannes. Its subtle complexities irritate detractors hawking simplified, digestible narratives: The state and its military leadership are honorable protectors; opponents like the Muslim Brotherhood are terrorists who relish destruction.
Broad categorization of members and affiliates of the Brotherhood is elusive. They seem prone to support violence if it serves their righteous cause and cling to trust in an almighty God to secure justice. Their preference for blind obedience over collective decision-making ultimately drives them—along with everyone else in the truck—to ruin.
Even the riot police and security officials are not impervious. Breaks in the would-be unfeeling mass oppose the homogeneity the uniformly clad figures represent. All of this is unsettling to proponents of a political reality that acknowledges no shades of gray. 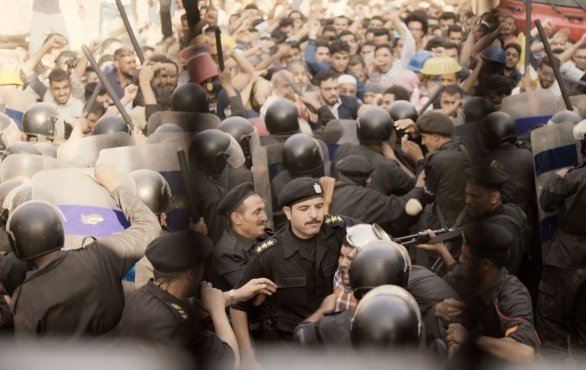 The film revolves around glimpses of actual events. Thirty-seven detainees, most of them supporters of the toppled Islamist president, died of asphyxiation when police ﬁred a hot tear gas canister into an overcrowded security truck outside Abu Zaabal Prison in August 2013. The tenor of this event haunts the film with the possibility that the roaming truck may be the detainees’ final destination.

Clash was considered a long shot to appear in Egypt’s cinemas. A media campaign began as soon as the film gained international notoriety, discrediting the film and its director, Mohamed Diab, who co-wrote the screenplay with his brother. The censors insisted the film begin with the words, “Following the events of the June 30 revolution, the Muslim Brotherhood led bloody clashes, seeking to halt the peaceful transition of power.”

Clash recalls the 1969 classic Shay’ min al-khauf (A Touch of Fear). Telling the story of a tyrannical village chief’s eventual demise, the film lasted briefly in cinemas and was not broadcast on television during President Gamal Abd al-Nasser’s rule. It was made following Egypt’s humiliating defeat in the Six Day War, which shut down the Suez Canal and left the entire Sinai Peninsula under Israeli occupation. Because of its timing, the film garnered speculation about its parallels with Nasser. In later years, the cry of rebelling villagers in A Touch of Fear became an enduring political and social motto.
Dark and foreboding, Clash may too possess a message that resonates for generations and cannot easily be ignored.

Excerpted from Information at War: Journalism, Disinformation, and Modern Warfare To be published by Polity …