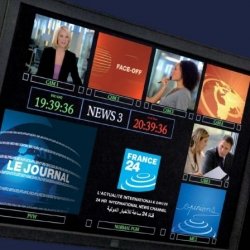 One expert calls it “an ocean of channels.”[1]  Another says it’s “a paradox of plenty.”[2]  And yet another laments that “a noisy marketplace makes it increasingly expensive to find, keep and grow a profitable market share.”[3]  These are all accurate characterizations of a seemingly accelerating proliferation of Arabic language satellite TV channels in 2007.  At last count, 280 of these outlets were vying for the attention of viewers in the Middle East and beyond.  And more are on the way.

For some years, Arabic has been the language of choice of more international broadcasters in more countries than any other language except English.  That was the case for radio even before the rise of television.  The principal challenge to TV executives and producers shows no sign of letting up in this sixth year after 9/11.  It is: how to make a dent in an already overcrowded market.

The latest competitors in the outside world for the eyes of the Arab Middle East include Russia TV Today, reported to be launching a 20-hour-a-day service in May, expanding this to 24/7 by the end of the year.  France 24 inaugurated an Arabic television service on April 4 comprising four hours broadcast daily to the Maghreb, Levant and Europe with plans to grow in stages to six, then 12 hours daily.  Deutsche Welle TV is expanding its current three hours a day in Arabic TV to eight hours.  And BBC Arabic TV is due to go on the air next fall, restoring a service that previously existed between 1994 and 1996.

“All of the new entrants,” says Professor Marc Lynch of Williams College in the United States, “are indeed going to face two basic problems: an increasingly crowded satellite TV field and the association they have with a country’s national interest.  That said, other countries won’t face the distinctive problem of anti-Americanism—and they might not repeat the mistakes of the American network Alhurra.”

Lynch, the author of Voices of the New Arab Public: Iraq, Al-Jazeera, and Middle East Politics Today, says:  “BBC Arabic TV can draw on a long tradition of independent broadcasting and will likely have a grace period with Arab viewers to prove itself.”  Lynch believes, on the other hand, that the French, Russian and German stations “are most likely to simply disappear into the ocean of other broadcasters.”

Lynch notes, however, that there is a tremendous variety among all the networks.  Only about ten of them, he says, are primarily focused on news, although some of them have political programming mixed within largely entertainment formats.  It may well be that market share will vary widely from one month to the next, depending on events.  In times of crisis, more viewers turn to the all-news channels or those offering reportage as seen from their perspectives.  In quieter times, more will tune in to the entertainment channels.

But in times of conflicts audiences do not necessarily turn to channels more likely to report in a balanced way. Lawrence Pintak, in the February edition of Arab Media & Society, observed that Al Manar’s coverage of last summer’s Israel-Hizbullah conflict “galvanized audiences across the Arab world—many of whom switched to Al Manar from Al Jazeera and Al Arabiya—generating widespread support for Shiite Hizbullah among all Arabs, Sunni and Shia alike.”  An on-the-spot wartime survey estimated that Al Manar vaulted for the first time to among the top ten satellite TV stations.  In 2003, a then new Arabic satellite TV network, Al Arabiya, garnered huge audiences within weeks, fuelled by the Iraq war.  That was when the then dominant Al Jazeera faced its first serious competition.

Ambassador Bill Rugh, an American expert on Arab media,[4] maintains that international broadcast audiences are sophisticated enough to listen to radio or watch TV from other countries “even if they disagree with the editorial slant.”  In times of crisis, he adds, viewers will look for fresh news, and they probably will try several sources to triangulate on a topic to see what several sources are saying, and in that way, put together a more balanced picture.

“So a balanced and varied program that serves different interests and different types of people,” Rugh concludes, “is likely to have a sustained audience.  That is, by the way, what VOA and BBC have done traditionally, and what Radio Sawa and even Alhurra fail to do.”

All the new or relatively recent non-Middle East entrants into Arab satellite TV field are optimistic.  Alhurra claims viewing audiences in excess of 20 million a week and takes pride in its three broadcast streams—one to Iraq, another to the Arab world as a whole, and a third to Europe inaugurated last August.  The station had exclusive video of the recent bombing inside the Iraqi parliament in Baghdad, and that video was picked up by several American public and commercial broadcasters.

On the other hand, Ali Jaafar in Variety’s April 16 edition cites a “less than stellar performance of Alhurra” and says its relatively low influence has reflected the view of skeptics who doubt the ability of any new station to garner substantial viewerships in the months ahead.  As a news source during the war in Lebanon last summer, according to Salameh Nematt, Al Hayat’s former Washington bureau chief, Alhurra was “virtually invisible.”[5]

“Al Jazeera has done a great job,” Variety quotes France 24 chief executive officer Alain De Pouzilhac as saying.  “But essentially it’s offering the Arab perspective.  We need something more.  The role of France could be a special one thanks to its strong relationship with the Arab world in the last few decades, and because we weren’t involved in the Iraq war.”

“If Alhurra is anything to go by,” says former spokesman for Al Jazeera and Al Arabiya Jihad Ballout, “then there’s no chance for these new channels to steal audiences from the existing ones.  The BBC is different.  It has a name and a culture, which is an asset.  If anyone has a chance, it’s them.”

In an interview with Arab Media & Society, head of the BBC Arabic Service Hosam El Sokkari, said late last year:  “What is radically different is the fact that we are doing this as an integrated multimedia platform. We have a radio station, we have an Internet operation, and we will have a TV operation. And we have compelling interactive content. I don’t think there is anyone in the Middle East that is doing that.”  Research indicates that 80-90 percent of those polled are likely to watch BBC Arabic TV.

Similarly, the director of France 24’s new Arabic TV service, Murielle Paradon, stressed the editorial integration of her operations with the network’s other program units.  “The ranking of the news,” she said, “will be the same on the French, English and Arabic channels, which requires very closely argued discussions, as it were, between the editors in chief of the three languages on a daily basis to reach agreement on the treatment of the news.”

All the new stations, in fact, have stressed the importance of objectivity in reaching what for some, will likely be niche, rather than mass audiences.  “Credibility,” Deutsche Welle director general Erik Bettermann told The Channel magazine in London, “is our most valuable asset, based and built on independent journalism practiced in our daily work.  DW-TV is relevant as an alternative to the government-controlled media of the Middle East and to the Anglo-American channels.”

Why the international stampede to the video marketplace of ideas in the Arab world and to Arabic-speaking communities in Western Europe?   There appear to be several motivating factors.  One is to provide high quality independent programming content to a region in turmoil and to foster dialogue, as well, with isolated and sometimes angry Muslim communities within the EU where terrorism can and does take root.  Another is to reflect the originating nation’s ideas, culture and policies.  A third is to provide educated elites with interactive forums (call-in or discussion programs) for considering reforms or a wider exposure to ideas than many indigenous channels offer.   TV is unquestionably the dominant medium in the new Arab public sphere.

“New communication technologies,” according to European media specialist Morand Fachot, “mean that the competitive environment is much tougher, domestic broadcasters becoming virtual international broadcasters thanks to the Internet or satellite broadcasts.”

There are no surefire formulas for success in this “ocean of channels.”  Those networks that have built new multimedia (TV and websites) on existing platforms using seasoned expertise appear to stand the best chance of reaching audiences that count—the intelligentsia, the governmental and opposition leaders who yearn to make a difference.

On April 25, President Bush announced the nomination of a new chairman of the U.S. Broadcasting Board of Governors (BBG), noted Washington publisher and columnist James K. Glassman.  The new chairman-designate, whose confirmation by the U.S. Senate was pending at the time of writing, will have before him a recently complete BBG draft strategic plan.  He will have to decide whether or not American overseas networks will continue to strive for mass audiences, or whether U.S. taxpayers will gain more value for their investment if the focus is shifted to producing in-depth programming targeted at elites and to preserving core information and English services.  A conference of international broadcast professionals meeting near Chicago at the end of April at the invitation of the McCormick-Tribune Foundation and the Hudson Institute counseled a much greater focus on elites, and urged Congress to provide ample resources to pursue these goals.

“Plenty of information,” says Harvard’s Joseph S. Nye, “leads to a scarcity of attention.”  In the words of a BBC study, “The way people get through it (this paradox of plenty) is by turning to people they trust.”[6]   Credibility then, would seem to be the ultimate force multiplier of “smart power” in international broadcasting to the Middle East.

Alan L. Heil Jr. is a former deputy director of the  VOA and author of Voice of America: A History, Columbia University Press, 2003/2006.