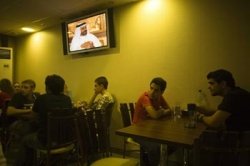 There is no doubt that the proliferation of Arabic language satellite stations is causing a lot of waves in the Arab world. Seen innocently, the need for some type of regulatory process makes sense. But the Arab League members with the exception of Lebanon and Qatar were not innocently trying to ban pornography or violent programming from Arabs’ television screens.  Nor is their most recent resolution trying to curtail the content of Arab satellite stations an attempt to create an Arab version of the American FCC.  It is no short of an attempt to control the minds and thoughts of Arab viewers, mostly on political issues.

The Arab League is a voluntary organization of Arab countries that has some moral authority but no binding power. Until recently, the only regular meeting that occurred like a Swiss watch was the meeting of Arab interior ministers. The leaders of Arab intelligence and security forces met regularly to plan and coordinate actions that protected their own regimes as well as the interests of their international allies, most prominently the United States.

Lately, information ministers’ meetings are competing with their fellow interior ministers’ in terms of regularity and coordination. In the Arab world, ministers of information (or ministers of disinformation as some sarcastically call them) are responsible for state run media. Some of them have offices at the national television headquarters where they direct the content of what their people get to see and hear.  They are often personally responsible for the content and order of the news and current affairs programming as well as who should be invited as guests and who should not be allowed to grace the national screen.

These media bosses dressed in ministerial clothes have been gradually losing power to the satellite stations. For some time governments have been resigned to the fact that the rich and elite will have access to alternative information coming from satellite but the poor masses will continue to be spoon fed through the terrestrial stations. But as the prices of satellite dishes have become affordable to the poor masses, and as the satellite
stations have cut deeply into the audience of national broadcasts, the alarm bells started to sound and the ministers of information increased their meetings hoping to find a regional solution to this problem.  They clearly could not stop broadcasters from Europe and elsewhere, so ministers began searching for a silver bullet that would stop unfiltered programming produced and transmitted from Arab countries, framing this as no less than quest for collective survival.

While the Arab League’s satellite charter begins its standards and regulations section with the call on broadcasters to abide by the “freedom of expression as a cornerstone of Arab media,” it negates that in the same clause by saying “provided that such freedom is practiced with full conscious and responsibility, in respect to protecting the supreme interests of the Arab countries, the Arab world, the freedoms and rights of others and
commitment to media professionalism and ethics.”

The term “supreme interests of the Arab countries” is a code word for the continuation and preservation of the ruling regime. The charter then sets out a list of vague and elastic restrictions that can be found in the press and publication laws of most Arab countries.

Couched between clauses that prohibit broadcasting obscenity, pornography and scenes encouraging smoking, the charter calls for “Abstaining from broadcasting anything that would contradict with or jeopardize Arab solidarity and [promoting] Pan-Arab cooperation and integration.”

It also calls for “abidance by objectivity, honesty and respect of the dignity and national sovereignty of states and their people, and not to insult their leaders or national and religious symbols.”

The strange notion that politicians are somehow immune from attack, that leaders are not to be insulted or that the satellite broadcasters are obliged not to jeopardize Arab solidarity is nothing short of censorship.

No wonder the International Press Institute (IPI), the global network of editors, media executives and leading journalists in over 120 countries, issued a statement saying that it was “deeply concerned” by the Arab League’s recent adoption of a charter regarding radio and satellite TV broadcasters.

”This document represents a step backwards for press freedom in the entire region, and threatens to undermine the significant strides recently made in some of the Arab world’s individual countries,” commented IPI Director David Dadge. “While no implementation mechanism has yet been approved for this resolution, the document’s broadly-worded provisions and recommended sanctions carry real risks of abuse. IPI urges all involved information ministers to seriously reconsider its implementation.” Of course, not only did Lebanon reject this document (stating that it was against their own sovereign laws) and Qatar didn’t vote for it, but the charter has no chance of being carried out without much wider follow on steps.

The charter violates international laws and treaties signed by most of the Arab states, foremost of which is Article 19 of the Universal Declaration of Human Rights. For example almost all the information ministers signing the charter are themselves (in their position as ultimate CEO of their national television networks) daily violating it by not abiding by its call on all the stations to adhere to honesty and objectivity in reporting.

In addition, the charter clearly violates more recent international treaties of commerce and free trade. Article 5 clause 5 of the charter states: “It shall ensure the Arab citizen’s right to view the major national, regional and international events including national figures or teams through a free to air or encrypted signals regardless of the ownership of these sports events rights, whether inclusive or exclusive.”

By banning encrypted broadcasts of soccer games, for example, the charter infringes on the rights of corporations who dished out millions to obtain the exclusive rights to show programming including the Spanish Football League and World Cup.

Arab League members know that they can’t stop the satellite broadcasts but are hoping that this charter will legitimize the restrictions in national capitals of the less fortunate satellite broadcasters who find that working in the Middle East is cheaper than broadcasting from Italy or London. If and when these new regulations are enforced on these poorer broadcasters, they will likely regroup and emigrate to the west, adding yet another layer to the brain drain and doing little to stop their broadcasts.

Daoud Kuttab is an award winning Palestinian journalist and the Ferris Professor of Journalism at Princeton University.  His email is info@daoudkuttab.com.