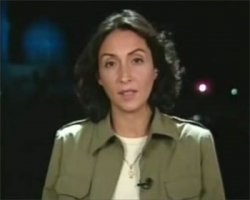 Once upon a time, in a kingdom far, far away, there lived a beautiful princess. Hers was a fairytale existence of spectacular palaces and footmen with gleaming swords and, of course, a handsome prince.

But this princess was sad, for the voices of her people were but a whisper. It was her fervent desire to hear the town criers shout news from the highest parapets; to watch the scribes fill vast parchments with true tales from near and afar.

Princess Rym, such was her name, was of good heart and gentle soul; well-versed was she in speaking with a clear tongue. In her youth, she had even dabbled in prose.

But evil forces conspired against this fair maid. Truth be known, in the king’s own entourage there were those who bowed obsequiously, yet secretly plotted to turn her dreams to dust.

One night at a gala feast, staged within the walls of a splendid castle on the shores of an inland sea of salt, the princess proclaimed her “Utopian” dreams of “lifting the veil” from her subjects and creating “paths to understanding” between peoples. Yet among those spellbound by her soaring oratory sat a scribe sentenced to be dragged away to the dungeons for speaking of dastardly deeds among the Powers that Be.

The princess knew such open talk from commoners was a “double-edged sword,” yet she still aspired to teach the way of the pen to the budding scribes of her land.

But in a neighboring kingdom, there lived a dark and brooding ruler who had no patience for little girls with wishes, and even less for those who wielded electronic quills against his swords of steel. His dungeons were crowded with those who raised their voices in defiance, and, for a time, he counted among his inmates she who came to be known as Facebook Girl.

Standing in the electronic town square, this brave young lass proclaimed that the emperor had no clothes, and forthwith traded hers for prison garb.

And being men, and drinking deeply of power, most rulers in surrounding lands sided with the dark lord. They penned a royal charter proclaiming ‘off with their heads’ for any rabble with the temerity to question their rule.

Verily, the peasants were revolting. Especially those with TV cameras and Internet connections…

Unfortunately, as the latest Freedom House report underlines, the relationship between media and state in the Middle East and North Africa is no fairy tale. Not a single Arab country has a press classified as “free.” For every step forward, there is at least one step back. For every official committed to loosening the reins, there is a lawyer wielding a lawsuit or a police thug with a blood-spattered baton. The rack may be history, but electric probes are today’s torture implement of choice. Just ask blogger and labor activist Kareem al-Beheiri.

The contrast between Princess Rym Ali, sister-in-law of Jordan’s king, and the plight of 27-year old Esraa Abdelfattah, Egypt’s so-called “Facebook Girl,” succinctly sums up the contradictions inherent in government-media relations in the Arab world.

Princess Rym, a former CNN correspondent, is on a quest to build the region’s first Arabic language graduate school of journalism. Facebook Girl, meanwhile, found herself being hustled off by Egyptian state security after creating a group on the popular social networking site that attracted 75,000 members and served as the spark for the country’s recent anti-Mubarak strikes.

The Egyptian regime’s contempt for – and fear of – the media can be seen in the recent seizure of satellite uplink equipment used by Al-Jazeera’s Cairo bureau and prosecution of the equipment’s owner; in what news execs tell us is pressure on Egypt-based satellite channels like Dream, Orbit, O-TV and El-Mehwar to sanitize their coverage of the recent riots in the delta town of Mahalla.  It was also on display in the roundup of  journalists and bloggers writing about the recent national strikes, and in the ham-fisted arrest of a Cairo University student, who, at an open forum with the prime minister, pointed out the contradiction between the PM’s call for young people to express their opinions on the Internet and the ongoing detention of numerous online activists.

Somewhat perversely, Freedom House shifted Egypt from the “not free” to “partly free” category in the 2008 report, but that was inspired by the “increased willingness” of Egyptian journalists to “cross press freedom ‘red lines,’” a brave trend in the face of increasingly overt government efforts to beat the media genie back into its bottle.

For example, the decision by Egypt’s Nilesat to pull the plug on Al-Hiwar, a London-based channel critical of the Mubarak regime, undermines claims that the Satellite Broadcasting Charter recently adopted by the Arab League is aimed primarily at hard-line Islamist stations radicalizing the youth.

That charter is emblematic of the degree to which Arab governments are struggling to cope with the cacophony of criticism seeping into their countries through satellite television, the Internet and SMS. Opponents no longer just rally; now they “twitter.” Banning TV cameras is no longer enough when every cell phone is a potential weapon in the media war. Social networking sites where 12-year-old girls trade make-up secrets have become breeding grounds for revolution.

The media ripple effect creates waves of information, breaching the walls of censorship with which Arab leaders have so long defended their castles. Each new story about public discontent reinforces the last. Peasants angry about the price of bread sympathize with intellectuals angry about rigged elections, who in turn support the rights of factory workers hundreds of miles away. Thus bloggers are jailed in Saudi Arabia, websites are blocked in Bahrain, Morocco blocks transmission of al-Jazeera’s Rabat-based Maghreb program, newspapers in Yemen are shut down and in Princess Rym’s own kingdom four journalists (one of whom was in the elite audience for her speech) were convicted for reporting a story that was factually correct.

That Lebanon has been driven back to the brink of civil war over efforts to shut down Hezbollah’s telecommunication network, and that the militia’s immediate response was to silence Saad Hariri’s pro-government Future TV and al-Ekhbariya TV channels and burn his newspaper, are further reminders that media are a central tool of power in the modern Middle East.

Lest we forget that even those who portray themselves as white knights sometimes have dark hearts, we must take note of news that the Pentagon has secretly set up a network of Potemkin news sites – including the Arabic Mawtani.com and Maghrabia.com – designed to peddle propaganda under the guise of independent journalism, and that the U.S. military finally released Al-Jazeera cameraman Sami al-Hajj after six years imprisoned at Guantanamo Bay and freed AP photographer Bilal Hussein, who served 735 days in detention in Iraq. No evidence, no charges, no trial in either case.

That they have been freed is a positive turn in the plot, but it is likely to be a long time before any Arab journalist lives happily ever after.

Lawrence Pintak is director of the Kamal Adham Center for Electronic Journalism at The American University in Cairo and publisher/co-editor of Arab Media & Society. His latest book is Reflections in a Bloodshot Lens: America, Islam & the War of Ideas.