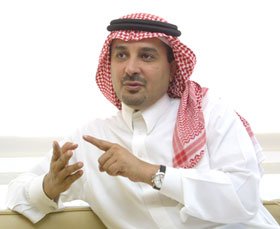 From TBS's point of view Ali Al-Hedeithy is not only the CEO who managed an incredible move from London to Dubai and, while still in England, brought down MBC's costs while signing off on "Who Wants to Win a Million," the most popular show in the Arab world. He is also generous. Until we stepped into his office, the name of the new all-news channel that MBC and its investor-partners are about to launch was top secret. Al-Hedeithy agreed to make that name available to us in time for this edition. The Director General of MBC spoke with TBS Publisher and Senior Editor S. Abdallah Schleifer at the channel's Dubai headquarters.

Schleifer: It's less than a year since you moved to Media City and into this marvelous oasis setting of a facility. In strictly broadcasting terms, how has it panned out?

Al-Hedeithy: The move was worth it. There were two reasons for the move. First of all one reason we went to London in the first place was that there were no facilities in the Middle East back in 1991 to accommodate a pan-Arab channel And I am referring to an environment when I say facilities - both to a technical environment and a political environment.
Things have changed, from both points of view. In Dubai we believe we can enjoy the same freedom and same technical provision that we enjoyed in London.

Schleifer: Isn't there another factor?

Al-Hedeithy: Of course, that's the second reason. It is more economical being in Dubai than London. And there is a third reason-we wanted to be closer to our audience. Because the people who work in the station must get feed back from the viewers, and by that I mean being able to meet at least a significant segment of one's audience in restaurants, cafes, or at universities. In London, where they go home and watch BBC and have their home life in England, there was little or no interaction with the viewers and we found out it's healthy to have interaction between the people who produce the programs and the people who view the programs.

Schleifer: You were promised various facilities like satellite links that weren't yet installed when I visited Media City more or less this same time last year.

Al-Hedeithy: Yes. We have own facilities and Media City provides their uplink facilities as a fall back for our own facilities. There is no problem with residence permits, no customs on equipment. Media City is a free zone and everything that applies to a free zone applies here. We are getting full cooperation. Media City or the government is building middle-income housing nearby; most of it is finished and some staff has already moved in. And more residential facilities are going up in the area.

Schleifer: Lets talk about the new channel, the all-news channel.

Al-Hedeithy: The idea has been in our mind for a long time but after 9/11, and the war against terrorism, and the turmoil in Palestine-all of these regional crises have convinced us there is a need for an all-news channel in Arabic.

Schleifer: There already is an all-news Arabic-language satellite channel-Al Jazeera. How is your channel going to different?

Al-Hedeithy: Right now there is only one all-news channel. People should have a choice, options, like elsewhere in the world. There shouldn't be a monopoly. And I believe there is a need in the market for even more than two all-news Arab satellite channels.

Schleifer: I know from trying to get this out of all your colleagues, quite unsuccessfully, that I am about to touch upon a tightly kept secret, but on the odd chance that TBS's professional standing and my charm has won you over, I'll give it a shot. Now that we are in the middle of a great interview, what's the name of the new channel?

Al-Hedeithy: Its Al-Arabiya. This is right now what we are working on. It will be carried by Nilesat, Intersat, Arabsat, and Utelsat. We are still considering various options in the US but I can assure you it will definitely be available to viewers in the States.

Schleifer: When do you expect to launch MBC 2, which is, as I understand it, going to be an English-language movies-plus entertainment channel?

Al-Hedeithy: Correct. It is an entertainment channel. We will launch, in sha' allah, about the same time.

Schleifer: MBC 2 would seem to me to be an attempt to improve your competitive situation, positioning yourself as a platform alongside those channels offering serious Western entertainment programming, such as Showtime and Orbit.

Schleifer: Why aren't you calling the all-news channel MBC 2 or even MBC 3?

Al-Hedeithy: Because Al-Arabiya is not owned exclusively by MBC. We have other partners who are not our partners in MBC. Beyond the ARA group, which owns MBC, there are Lebanese and Kuwaiti business interests.

Schleifer: Is there a connection between these Lebanese investors and the alliance you have recently formed with Future?

Al-Hedeithy: Yes, more or less there is a connection.

Schleifer: Why did you enter in to that alliance?

Al-Hedeithy: We haven't entered into it formally as yet, but we are still talking about how to implement it. One company, AMS, is already selling advertising time for both LBC and MBC1, but as separate accounts. Perhaps we will now be able to offer advertisers a choice of package advertising. This alliance could mean sharing costs for special projects, for production of programs, and for bureaus.

Schleifer: You don't consider yourself as a competitor?

Al-Hedeithy: No. Nothing will change on screen. But by sharing resources we will be more effective and efficient at a lower cost. They are a supra-national channel-primarily Lebanese, even if their audiences are to found throughout the Arab world. But Future is still primarily Lebanese, while we are truly pan-Arab. We are aiming at a real or full partnership and that includes taking investment positions in each other's companies. Let me put it this way. A cost-reducing consolidation of resources will take place that will be translated into investment while the two partners nevertheless keep their own identities and brands to provide advertisers with superior demographics. Future and MBC have a similar product but they have different identities.

Schleifer: What about the LBC - Al-Hayat alliance?

Al-Hedeithy: I don't see any impact. Schleifer: Well, it's interesting because LBC is training a lot of Al-Hayat reporters in television journalism. Al-Hedeithy: They want to compete with MBC News on the regular MBC channel, which LBCI approximates. That's the reason for the alliance with Al-Hayat. They want to improve their product to compete.

Schleifer: Turning to the technical side of this new, Dubai-based MBC, my friends over at Sony Broadcast and Professional say that this set-up is state-of-the-art. It's a big investment. Was it worth it?

Al-Hedeithy: It's worth it and long overdue. We were going to do it in London but we delayed because we had this move in mind. It's the latest in broadcast transmission and production facilities. We were analog from Battersea, but now we are digital. And we have a built-in capacity to add on new technological developments as they appear.

Schleifer: Well, it helps to have Sony as your neighbors in Media City. They are right next door to you. Amazing!