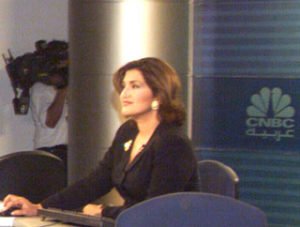 Lina Sawan's is one of the most familiar faces on CNBC Arabiya. TBS caught her for a few words between programs.

TBS: What do you do here at CNBC?

I'm co-anchoring a show called Uruppa al-Layla ("Europe Tonight") for which we connect with our bureau in London. We follow that up with Amrika al-Layla ("America Tonight"). We follow these up with a show called al-Nabd ("The Pulse"). And I do two other shows twice a week. On average I'm on air two and a quarter hours a week. I also co-anchor The Middle East This Week.

TBS: Tell us about your personal experience.

I was born in Baghdad, then we moved to Kuwait. My parents started the radio station there, one of the first teams. Then we came to Abu Dhabi and they started a radio station there. I went to school in the States, then at AUS [American University of Sharjah], where I got a scholarship. Then we went to London, where I did a lot of work in the advertising business. I moved into the media when the Arabic media took shape in London. I was one of the people in the original team at MBC [Middle East Broadcasting Center]. I started presenting in '91.

TBS: How did you join CNBC Arabiya?

I happened to be in the country, came over met the guys, and we agreed. I miss London, but after 22 years of London, I wanted a change, and I like it here. I have a son and he's doing more than he could do there.

And also I have to tell you this, there's no more media biz in London. Everyone has moved out.

The push factor is that it is very expensive. Arab broadcasting institutions do have a habit of inflating themselves. It became too heavy and a big burden.

TBS: When you were working as an anchor, was it in business or in general news?

I've never done business before. I like it very much, because it's very exciting, I keep telling my bosses to let me get at those numbers.

TBS: What is the look you strive for?

Simple. On our media, our screens, we have a lot of over-done presenters, so we are not totally plain, totally down to earth, but we are more professional, a little closer to the Arab woman. To be truthful I don't think we're coming out every single time the way we'd like to have it. That comes with experience. After you develop your screen personality, you know what to wear.

TBS: What do your parents think, as pioneer broadcasters in the area?

They come from a generation that was more professional than us. We come from a world of a lack of training in good journalism. The reason is that somehow standards have fallen. My parents are not that impressed by television anymore. Unfortunately, the medium itself is not that serious about itself. The only people who are serious about it look at its commercial aspect only. But if you are talking about standards of TV journalism, I don't think we are there yet.