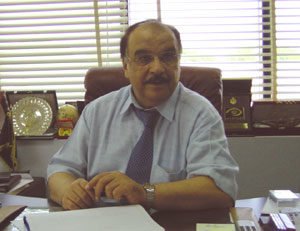 Adnan Sharif, who took over as manager of Al Jazeera from Mohammed Jasim Al Ali in the spring, is one of the Al Jazeera's founders, having made the initial studies for the channel while he was in London, where he started work in 1989 as a current affairs and news producer and presenter on the BBC World Service's Arabic radio programs. When the BBC launched BBC Arabic Television with Orbit, Sharif plotted Al Jazeera's birth with Sami Haddad and Jamil Azza, joined later by Faisal Qasim, all of whom worked at the new channel during its formative period.

Schleifer: Which came first—the idea of an Arab-based 24-hour all-news channel or the crisis between Orbit and BBC which resulted in the collapse of the BBC Arabic TV channel, and from where so many of your core staff came?

Sharif: The idea of Al Jazeera came first. When I joined Al Jazeera during the studies and planning phase, I resigned from BBC Arabic TV, which was still broadcasting at that time. We had a vision, that after CNN and BBC there was a new era for satellite TV. We thought a service like that, a professional service in Arabic and based in an Arab country, could be very useful as a 24-hour TV news channel. I was 100 percent convinced when we were advancing this idea that the future would be specialized channels - news, sports, etc., but initially there was resistance to this idea in Qatar.

And we had a vision of a channel that would reach far more people than BBC Arabic was capable of. Remember that BBC Arabic was encrypted; it was not free to air. It could not achieve the sort of audience that wanted what Al Jazeera would provide them with. I worked in Qatar from 1972 to 1989. I knew Qatar and the Qatari government had cancelled the ministry of information even before Al Jazeera was launched, positioning itself as the logical home for the practice of free and professional TV journalism and public affairs programming.

Schleifer: What about political restraints?

Sharif: There were no restraints. We (Qatar as well as Al Jazeera) needed the credibility of a free broadcaster originating in the Arab world.

Schleifer: Are you still planning to launch an English channel?

Sharif: We intend to make use of the existing Arabic news-gathering capacity of Al Jazeera for the Al Jazeera English-language service, just as we (in BBC Arabic Radio) were an Arabic cell within an overwhelmingly English-language BBC World Service. And this will favorably impact on our English-language website because it means there will be more English-language material originating from Al Jazeera than at present. We will launch the English channel as soon as possible.

Schleifer: Do you see your management as a continuation of the previous management led by Mohammed Jasim Al Ali?

Schleifer: Was there any connection between your appointment and the accusation shortly after the fall of Baghdad that four people at Al Jazeera had been secretly recruited by Saddam's government?

Sharif: It was a form of pressure on us. There was nothing there in the end. But we are under pressure all the time.

Schleifer: What about the Taysir Allouni case?

Sharif: We think Taysir Allouni is a dedicated journalist. We are supporting him legally and from our side as journalists, and we are talking to NGOs that get involved in an issue like this one. We must support him because he is one of our best correspondents. And all he sought was scoops like any journalist and he was not the only journalist who met those people from Al Qaeda.

Schleifer: How are you handling the ban by Iraq's Interim Governing Council (IGC) on your covering GC activities in Baghdad?

Sharif: They implemented the ban in a limited sense whereby we cannot attend sessions of governing council, and it ends in a few days.

An Al Jazeera cameraman was arrested three days ago. More than ten of our people have been arrested and released since the fall of Baghdad. The tapes are always confiscated. Sometimes they return the tapes and sometimes not. Actually, 15 of our people have been arrested. Al Jazeera is more independent, more aggressive in seeking news, which means that as journalists you seek contacts with the opposition or the resistance.

Our office in Baghdad is seeking some sort of understanding with the Coalition that will satisfy them without compromising our journalistic criteria of correct news-seeking behavior.

As for overall relations with America, some of the declarations or comments from American officials have been critical and some of these remarks could be characterized as offensive. In one case, I discovered it was a misinterpretation or mistranslation that led to American over-reaction: an Al Jazeera news report that should have been translated as referring to the "cordoning off" of a house, was translated as reporting that the house was under siege.

Schleifer: How are your relations with the Arab states?

Sharif: Our bureaus that were closed down then are still closed, except for Jordan. Kuwait is still closed but we have resumed work in Morocco. We seem to be under less attack and there seems to be more understanding of our mission.

Sharif: We are always interviewing Israelis. In fact other stations that never interviewed Israelis before do so now. We sometimes refer to this as "the Al Jazeera effect."

Schleifer: The last time TBS talked with Al Jazeera, you had no competition. Now you have it—from Al Arabiya, Abu Dhabi, and to a lesser degree the Al Hayat/LBC news center.

Sharif: To be frank, we don't think of them as competition. They copy us. As a viewer I feel they are copying us. We see ourselves as competing with CNN and BBC World.

As a new channel, Al Arabiya attracted people who wanted to see a new product, but basically we have a stable audience. On my last flight to England, I watching a Hollywood movie called "The Core." In the movie the world stops rotating and this is announced by CNN, BBC, Fox, ABC, CBS, NBC—and Al Jazeera.

INTERVIEW | Past, Present, and Future Violence in Lebanese Comics

Steven Salaita is the Edward Said Chair of American Studies at the American University of Beirut. He is a scholar of indigenous America and has written extensively and comparatively on the question of Palestine and anti-Arab racism. He speaks with Arab Media & Society about academic freedom, tenure, the special case of Palestine, and self-regulating suppression.