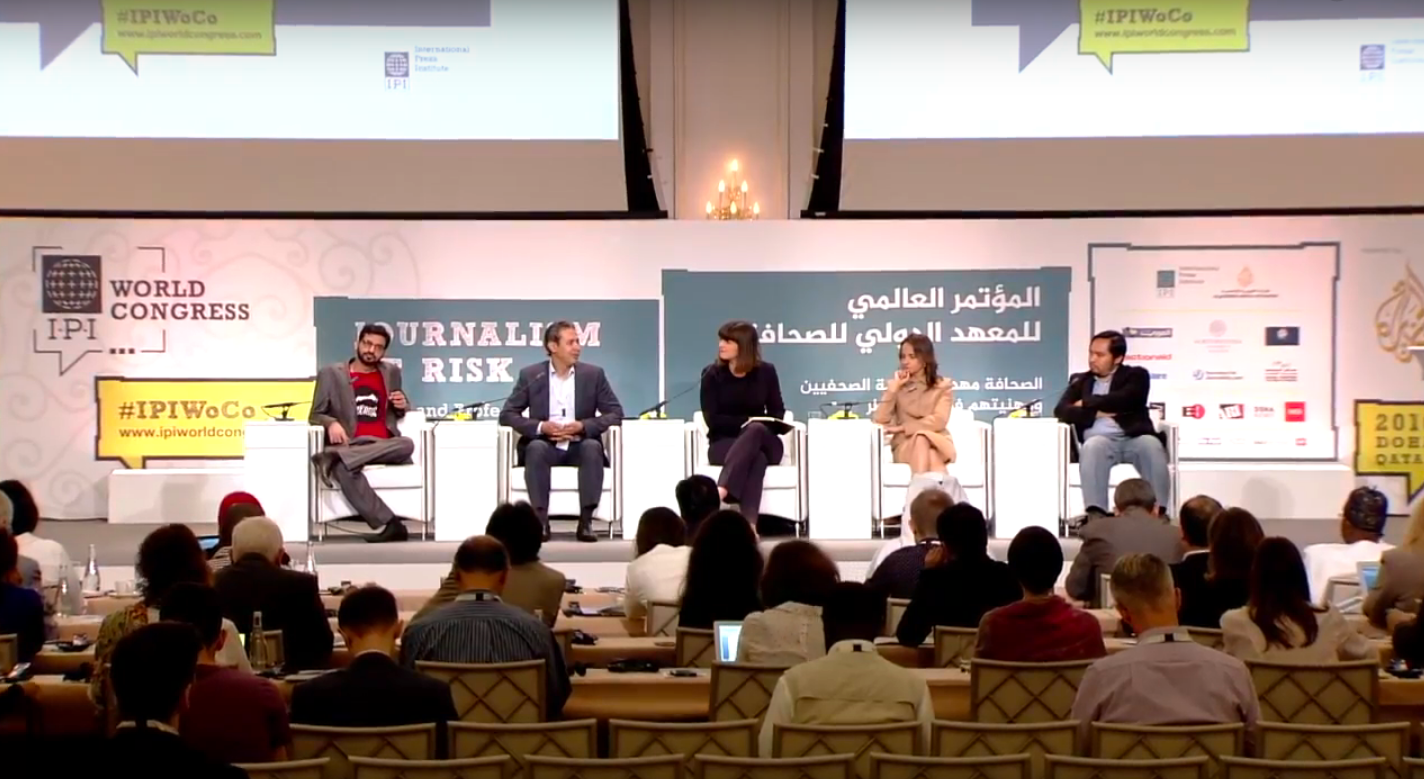 Under the banner “Journalism at Risk: Safety and Professionalism in a Dangerous World,” the 2016 World Congress of the International Press Institute (IPI) convened in Doha, Qatar in March to tackle the dangers of covering terrorism and other forms of political violence. Participants looked to ongoing developments in the Middle East and around the world to provide the basis for their discussions. Youtube

In wide-ranging panel discussions and workshops, congressional delegates identified and advised on best practices to facilitate timely and safe independent event coverage. They developed these journalistic guidelines by studying regional and international trends and patterns. Topics of discussion ranged from covering violent extremism to fortifying digital security; from keeping your team, newsroom, and reputation safe in an evolving high-risk environment to determining media’s responsibility for its citizen journalists; and from covering the refugee crisis to promoting safety through international mechanisms and newsroom protocols.

The proceedings began with a group of expert panelists—joined by editors, media executives, and leading journalists in the audience—grappling with how to cover violent extremism. This pressing issue is not limited in relevance to the Arab world but rather is a question encountered globally.

Among the questions brought up: How can those who risk their personal and mental health daily better prepare for the job of covering terrorism and other forms of violence? What can people on the news desk do to ensure the safety of their journalists in the field? What obligations do news organizations have toward freelance journalists and other sources without staff jobs, who supply content at great personal risk? How important is language when reporting on violent extremism?

British television journalist and filmmaker Sue Turton moderated. Her experience with the topic at hand is not lacking: She was one of nine Al Jazeera journalists convicted in absentia of aiding and abetting a terrorist organization in Egypt. Turton received a ten-year prison sentence in 2014. Before becoming the first Afghanistan correspondent for Al Jazeera English in 2010, she reported for Sky News, ITN, and Channel 4 News. The panel discussion featured Baker Atyani, a senior international correspondent for the Dubai-based news channel Al Arabiya; Wahyu Dhyatmika, former investigative reporter and current managing editor of the Indonesian publication Tempo.co; Jahanzaib Haque, editor of Pakistan’s Dawn.com; and Mariam Oubaiche, a senior journalist reporting in Iraq, Afghanistan, and Syria for the Al Jazeera Media Network.

Asked by Turton what journalists—as well as editorial and news desk staff concerned about their safety—should do when preparing to enter areas of conflict, veteran journalist Atyani and the others agreed that “doing your homework” is crucial.

“One of the main things a journalist should do is to know with whom he is working,” Atyani observed. The Jordanian national, who came to prominence as the last journalist to interview Osama bin Laden before the attacks of September 11, 2001, has covered conflict zones in Asia for the past 16 years. Atyani has become an expert on militant groups in the region. While working on a film in 2012 and 2013 about a decades-old conflict in the Philippines, Atyani was taken prisoner. The Islamist Filipino rebel group Abu Sayyaf held him hostage for 18 months. To this day, Atyani says he believes that he was “sold out” by his producer and handed over to Abu Sayyaf for money.

“I always tell journalists: you need to know who your producer is,” he said. “Who is the journalist you are going with? Are you going with someone from the government, or an activist who belongs to a militant group? I failed to do [my homework] myself.”

Turton agreed: “It’s not just the producer—it’s the local fixer, the driver, it’s everyone involved with you who you need to be worrying about.”

“But how much of the responsibility is on the editors and bosses to make sure all the preparations are done properly?” Turton pressed panelists to answer.

Wahyu cited the people in the newsroom as the main bearers of this responsibility. It is their job “to make sure that the reporters are in safe hands, that they are working with trusted parties, and that they know what they are doing—that they understand the issues. We make sure that we don’t mismatch—that we don’t send someone who was embedded with the police or military to a group that has [sic] an antipathy toward or problems with the authorities.”

Turton queried panelists about the importance of inter-organizational collaboration for improving safety and security: What can the people back at base do?

In his capacity as editor of Dawn newspaper’s online counterpart, Haque is responsible for some 500 to 600 journalists within the Dawn Media Group; these individuals make up part of Pakistan’s oldest and most widely read English-language publication. He said that one of the things his organization has done to expedite safety protocol in Pakistan is to “put every single important news director and editor across the media groups into a WhatsApp group.”

The editor said that now when a journalist is kidnapped or there is a bomb scare inside a media organization’s building, the WhatsApp group can resolve whether or not to go public with the information immediately.

“It’s a very simple solution,” Haque remarked. “But what this does is that when news breaks or something happens with regard to violence against our journalists, we can quickly make decisions about what we need to do across the media.”

The panel then turned to non-staffers—freelance journalists, activists, and citizen reporters—who are becoming increasingly indispensible to news organizations for their role in supplying content. Given that these sources already take on more risk with less security than journalists with staff jobs do,Turton questioned their proper function and how their situation might be improved.

“This is something we are all worried about—that freelancers are being used as cannon fodder by some organizations,” she said. “What can we, as a body, do to try and protect those we rely on?”

Oubaiche noted that there have been more activists than journalists on TV screens since the beginning of the Arab Spring. While their contribution is important, she said, activists use “another vocabulary, another editorial style.” When this lead to missteps that represent the network, it can be difficult for her to cover other stories and to be accepted by certain sources and even regions.

“We have to filter their work and teach them to differentiate between their own opinion and what you can broadcast on TV,” she said. “A certain balance is needed.”

Haque concurred: “At Dawn TV, activists with absolutely no experience come on the channel and what they say has an immediate impact. The Taliban hears what actually shouldn’t have been said and immediately assumes this is the voice of the Dawn Media Group. That’s hugely problematic.”

Atyani stressed that media organizations must do more to train, equip, and protect these sources, while Turton drew attention to the successful efforts of NGOs like Frontline Club and Rory Peck Trust to improve safety and welfare for freelance news gatherers across the globe.

A Matter of Language

“How important is it to get the language right when you’re reporting from the field?” Turton asked. “If you don’t get it right, how much can that backfire on you?”

A media organization’s lack of a balanced editorial line or language can cause serious repercussions, Atyani replied. He maintained that an editor can always “fix” the language of a citizen journalist or an activist on the ground. But, “when an organization has an editorial line that is with one party and against another, journalists in the field are harassed [and] kidnapped.” He pointed out that Al Arabiya’s offices were bombed twice because of its editorial line.

Wahyu emphasized that while every media outlet is entitled to its own editorial policy and its own perspective, a more important quandary is ensuring independent reporting that is not driven by the editorial line. He explained, “I think the audience can see the difference when news reporting is driven by certain ideological or editorial policies or when it is independent and objective, even though it’s being reported in a media that has a very strong editorial policy toward one camp or another.”

What We Got Wrong

Finally, Turton requested that the panelists reflect on what they got wrong in the past so other journalists reporting on violent extremism might learn from their mistakes.

Haque acknowledged that one of his organization’s most significant mistakes was allowing internalized self-censorship to affect everyone.

“We have a mental checklist of things you cannot talk about—self-censorship engrained in our heads because we are terrified, because if you look at the [number of] journalists who are kidnapped, murdered in Pakistan, it’s pretty high,” he said. “We have bomb scares. Our vans are shot at. There’s violence virtually every week, so the self-censorship kicks in. Everybody has this list in their head: the blasphemy law, anything religion-related, the Pakistani army, etc. This is a huge problem. I wish I could overcome it, but I also have to keep my 500 to 600 people safe, so I’m not sure where it stands, but that is the problem.”

On the other extreme, Wahyu judged that his organization’s biggest mistake was not adopting filters. In the wake of the bombings in Jakarta, Bali, and even Indonesia back on Christmas Eve 2000, the media “was too eager to follow the lead, join the police in getting the terrorists.”

Turton eventually responded to her own question, saying that that her biggest mistake was not being sufficiently alert to anticipate what happened to her in Egypt.

She recounted: “Although not a war zone [and] not a conflict zone, it was a very tricky situation for anybody covering events at the time. We didn’t recognize quickly enough how things had changed and how we as journalists are not protected—even when we think we are—from the regime coming and picking us up and throwing us in jail and going the full course, throwing us in court and convicting us.”

Turton emphasized the constant vigilance journalists must employ to not become inured to the danger of their profession and circumstances: “even when you have been in a country for quite some time—and we had been operating under the crackdown for some time—we didn’t recognize that the worst could happen, and so when it did, it was too late.”

She stressed that regular assessments of environmental danger and risk are crucial for journalists reporting on politically motivated violence.

Michael Kudlak is a project consultant for the International Press Institute.