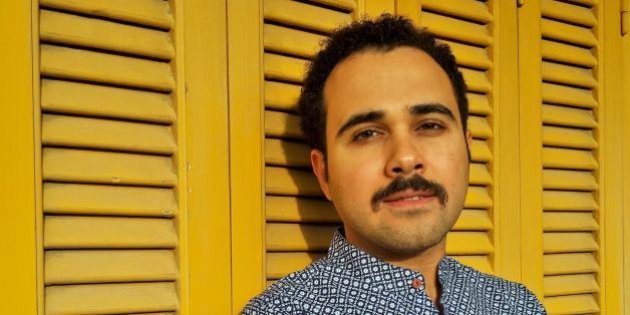 CAIRO—Egyptian writer and journalist Ahmed Naji was brought to court Saturday, where he faces trial for publishing "obscene sexual content" in a literary weekly.

Many on social media expressed solidarity with the writer. Prominent writers Mohamed Salmawy and Sonallah Ibrahim attended the hearing, Naji said on Twitter.

This is Naji's second appearance in court at a trial that has galvanized social media. Naji's crime was publishing a chapter from his novel "Using Life" in a literary magazine belonging to Akhbar al-Youm.

Set in Cairo, the novel tells the story of Bassam, a man lost inside a "spider web of emotional frustration and failure." Oscillating between the present, the past and the future, it explicitly describes sexual acts.

After he learned of the trial, Naji told Aswat Masriya on Nov. 1, that this is proof that creativity in Egypt is in "crisis". Prosecutors said Naji published "written material containing lust," adding that he let his mind and pen be used for "malicious" purposes in "violation of the sanctity of public morals" and leading to temptation. The trial also includes the editor-in-chief of the publication, Tarek al-Taher.

Al-Taher told prosecutors during questioning that he only reviewed the title of the story, without reviewing the whole text, adding that he would not have published it had he read it. He failed to meet his duty of "supervising the story" prosecutors said.

The trial was postponed to Jan. 2, when the verdict will be issued.

Freedom of the press and freedom of expression in Egypt have long been under scrutiny, both by local and international watchdogs.

Last week, novelist Alaa Al Aswany's monthly seminar in Alexandria was cancelled he said in a short statement on his official Facebook page.

He said it was cancelled after security forces objected to the topic of the seminar, which was titled "the conspiracy theory, between reality and illusions."

In an article on the cancellation of Aswany's seminar, the Guardian said, "The cancellation comes as the space for speech that doesn’t fit [President Abdel Fattah al]-Sisi’s narrative has narrowed."

There have also been a string of cases in the past two months where journalists have been detained and questioned by Egyptian authorities, the latest being journalist Ismail Alexandrani who faces charges of joining an illegal group, spreading rumors and disturbing public peace.

In August, President Abdel Fattah al-Sisi denied that any journalists are detained in cases related to publishing or press freedom.