Home / Books & Reviews / Information At War: Hamas vs. the IDF 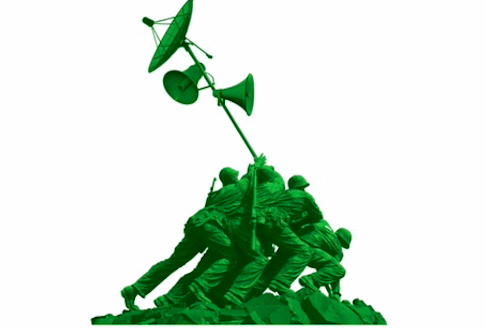 Excerpted from Information at War: Journalism, Disinformation, and Modern Warfare 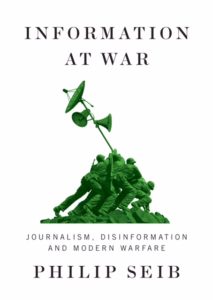 To be published by Polity Books, summer 2021

The persistent conflict between Israel and Hamas only occasionally attracts much attention beyond its own region, but for the women, men, and children on the ground this is not a “small” war. When fighting flares up, civilian casualties are abundant, mainly on the Palestinian side.

Gaza, or the Gaza Strip, has been governed by Hamas since the Palestinian Legislative Council elections of 2006. Israel and Egypt control Gaza’s land borders, and Israel has imposed a maritime blockade. About two million people live in Gaza’s 139 square miles (about twice the size of Washington, D.C.), 65 percent of whom are age 24 or younger.

The Gaza War of 2008-2009 (the Israeli military named their effort “Operation Cast Lead”) began in late December 2008, when Israel claimed there had been an increase in rocket attacks from within Gaza. The fighting lasted just three weeks. Casualty figures vary depending on their source, but approximately 1,400 Palestinians were killed, while 13 Israelis died (ten of whom were soldiers, four of these killed by friendly fire). These numbers were evidence of Israel’s military superiority, but they also raised legal and ethical questions about proportionality. This imbalance was a factor in Israel’s determination to influence the content of news reports and other information about the war, and in Hamas’s resolve to narrow the information gap between itself and the Israelis.

For Israel, which controlled access to the combat zone, a first step was to prevent foreign journalists from entering the area. Then the Israeli military began disseminating videos on You Tube, including footage of Israeli bomb strikes against Hamas. These appeared to show that only combatants were targeted. For its part, in terms of what was then considered “new media,” Hamas relied on blogs and websites to present its version of events.

This was early “social media warfare.” As with its military might, Israel far outdistanced the information capabilities of Hamas, controlling the war narrative through media content and global public relations efforts that were more sophisticated than anything Hamas (or its supporters in the Arab world) could muster.

The next Israel-Hamas war in Gaza came in summer 2014. Israel named its air and ground assault “Operation Protective Edge.” The conflict began after the kidnapping and murder by Hamas of three Israeli teenagers, followed by the arrest of the alleged criminals, and then barrages of Hamas rockets fired into Israel. Once again, the Palestinians suffered far greater losses than the Israelis. During Israeli air strikes and its ground invasion, approximately 2,200 Palestinians were killed while 72 Israelis died (of whom 67 were soldiers).

By 2014, social media tools, which had been in their infancy during the 2008-2009 war, had entered a robust adolescence. Also by 2014, Hamas had recognized that having a social media-oriented information strategy was a wartime necessity. During the week leading up to the fighting the Twitter hashtag #gazaunderattack was used 375,000 times, and during the month that the war lasted it was used four million times, outpacing the IDF account about the conflict more than twenty-fold.

Sometimes the Hamas tweets included photos purportedly showing damage to civilian areas. The BBC, however, found that some of these photos were actually from fighting in Syria and Iraq years earlier. Some verified photos that were published online caused their own furor. One posted on Twitter by a Danish journalist showed Israelis on a hilltop – with camp chairs and popcorn – celebrating as they watched Israeli airstrikes in progress. That photo was retweeted more than 8,500 times.

Graphic and politically controversial images that mainstream news organizations might decide not to publish can still reach large audiences through social media venues. By 2014, Hamas and its supporters had learned this. They established a Twitter account, @alqassambrigade, posted photos of Palestinian casualties, and issued threats directed at the Israel Defense Forces (IDF). (Twitter later removed that Hamas account.) IDF has been on Twitter since 2009, and as of mid-2020 @idf had 1.2 million followers.

Social media also provide a way to put civilians to work in assisting a war effort. In 2014 at a university in Israel, as many as 400 students worked at banks of computers to send pro-Israel messages to the world. Writing in 30 languages, they targeted online forums while trying to be seen as ordinary forum participants. They also lobbied Facebook to remove content inciting violence against Israel and posted drawings of Hamas rockets made by Israeli children who had been under attack. The student effort also created a website in 13 languages with updated war information, videos, testimonials, and other pro-Israel content.

As of 2020, a tense standoff between Israel and Hamas continued, with spurts of violence occurring from both sides. In purely military terms, Israel remains far superior; its weaponry and the capabilities of members of its armed forces cannot be matched by the Hamas fighters (or, for that matter, by any of Israel’s other neighbors). Because of this superiority, Israel acts with a certain amount of restraint, knowing its political footing is always precarious. If Israel were to try to “conquer” Gaza, it could almost certainly do so, but this would involve vicious urban combat with massive physical destruction and many Palestinian civilian casualties. Much international public opinion would gravitate toward the underdog Palestinians.

As David Patrikarakos observed: “Asymmetric warfare is not so asymmetric anymore. The IDF would have to meet Hamas not just on the battlefield but in cyberspace. War would have to be fought at the narrative as well as the physical level.” Competition among war-related narratives is not new. Virtually every war has narratives driving it: slavery or states’ rights in the American Civil War; the presence or absence of weapons of mass destruction in the Iraq War; and countless others. What has changed is the involvement of global publics in shaping these narratives. No longer the exclusive domain of bards and presidents and generals, the wartime narrative may now incorporate contributions from millions of individuals using social media to help shape the cases for and against a conflict’s protagonists. Lt. Col. Lerner’s points cited above illustrate how seriously one of the world’s top military organizations takes the business of narrative and the need to wisely use new media tools in this venture.

Information at war can serve as something of an equalizer, but only to a certain extent. Between the Gaza wars of 2008-9 and 2014, Hamas became considerably more sophisticated in its approach to using information, particularly via social media, and this helped Hamas generate international political pressure on Israel. Analyzing social media use in Israel’s 2012 Operation Pillar of Defense, an eight-day exchange of airstrikes and rocket attacks that was a prelude to the 2014 war, Thomas Zeitzoff found that “shifts in public support reduce conflict intensity, particularly for Israel. This effect is greater than the effect of the key international actors.” As online support for Hamas increased, Zeitzoff wrote, Israel significantly reduced the number of its airstrikes.

Nevertheless, as Hamas moved toward greater social media expertise, it was important to remember that war comprises varied constituent elements. The political facets of conflict are, in most cases, important, but although the information-politics nexus can (as in the Pillar of Defense case) affect combatants’ tactics, this transient influence does not necessarily mirror the actual combat capabilities of the warring parties. The virtual battlefield is global, and in 2014 most IDF and Hamas twitter followers lived abroad. Hamas tried to take advantage of information-enhanced political efforts, but a tweet is far from being the equivalent of an Israeli Air Force F-15.

Philip Seib is a professor at the University of Southern California and is the author of Beyond the Front Lines, The Al Jazeera Effect, and many other books.