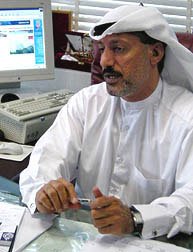 Schleifer: How is Al Jazeera's coverage different from past years?

Al Ali: The big difference is that with each passing day we acquire experience. This year we were able to apply our past experience by undertaking longer term and better planning-where to put our journalists, how to get into difficult, even dangerous, but newsworthy places.

What we want is what the audience wants-good coverage. They are not concerned with our problems. We know how to deal with difficult and dangerous events, which is why we had to move most of our journalists from Afghanistan to Iraq. The important thing is to ask ourselves, "What do the people, our audience expect from us as journalists covering global news?"

Schleifer: How much of a hardship were those closures of your offices in Jordan, Kuwait, and the Emirates?

Al Ali: Not long before this war, and quite suddenly, Al Jazeera's offices were closed down in Kuwait and Jordan. But two weeks ago, they (Kuwait) allowed us to reopen the bureau and at this moment we have two correspondents who got into Kuwait and got embedded with American forces-Amr Al Khaki and Saad Al Anazi. One is operating right now in Zubayr and the other in Basra, and of course inside Basra [Editor's note: still under Iraqi control at the end of March during this interview] we have two reporters, Muhammed Al Abdallah and Abdul Haq Sadah.

Schleifer: Why the change of heart?

Al Ali: I think after a while they realized we are not against any country. You know, this business about being closed down has happened twice before.

Our correspondents have videophones and ordinary satellite phones. Not bad for covering the news for television in difficult areas. We just broadcast Amr Al Khaki via videophone interviewing an American Marine in Zubayr earlier today. The quality is quite amazing. And we continue to recruit new journalists or make even better use of existing personnel. Take Omar Al Asawi. He's been with us from the beginning, a very good reporter and the producer of the very popular documentary on the Lebanese civil war. Now he is working on the history of the PLO.

Schleifer: Looking back, how would you characterize Al Jazeera's accomplishments?

Al Ali: Well, most of the quick media reports on Al Jazeera tend to point to Afghanistan as the great break through for Al Jazeera. They ignore our unique coverage from within Iraq of the Desert Fox air war in 1998. In fact that coverage got Al Jazeera on the front page of the London Times.

Schleifer: True enough, and TBS takes note of that coverage when we review the rise of Al Jazeera. We also call attention to your pioneering and quite courageous role in providing coverage of Intifidat Al Aqsa from the beginning. But it was Afghanistan that most dramatically put Al Jazeera on the map leading all the other TV news organizations as far as coverage from within Afghanistan. How long will you be able to dominate satellite news from the Arab and Islamic world in face of all the new competition?

Al Ali: We will survive, and to do so, to hold our position, we must cover this war better than other channels. If we are talking about Iraq, we are in three different locations-Mosul, Basra, and of course Baghdad. We have five reporters in Baghdad and one in Mosul and two in Basra, plus the two embedded with the Coalition in the south, as well as two in the north in Kurdish Iraq, Yusuf Sharif and Wadah Hamfa, in Sulaimaniya and Erbil. We are in fact covering the Iraqi opposition from those two positions. And don't forget our strong presence in London and particularly in Washington DC where Hafez Al Marazi runs a bureau that can field six reporters.

Schleifer: What are the problems you have faced?

Al Ali: The same problem we had when we couldn't get our reporter back into Northern Alliance territory following the assassination of Shah Massoud by men posing as Arab TV journalists: access. In this case, we don't have enough reporters embedded. The problem isn't the Coalition. We were assigned places for four reporters but we couldn't succeed in filling those positions because of the Kuwaiti ban on Al Jazeera personnel.

And of course there is much more competition now. But I consider that competition to be healthy and it will encourage us and everyone else to upgrade services. But how free is our competition, how free are those other Arab channels-that's the question the viewer will ask.

Schleifer: Given that Al Jazeera is being positively wooed by the Coalition Centcom public affairs people despite the occasional harsh words over some of the pictures you have chosen to screen, have your problem with the advertising agencies eased over the past year?

Al Ali: It's the same problem. The advertising agencies in the western countries, and in the Arab world, are making decisions on where to place their advertising that are not based on audience share. We should have the most advertising, and we don't come anywhere near that, so the situation has not changed. In fact, it has gotten worse - but that challenges us to seek more income from other sources. We pursue the opportunity to earn income from cable operators, and we are selling pictures. At the time of Afghanistan, we dealt only with CNN, but we have learned a lot since then and now we deal successfully with ABC, Fox, ARD as well as CNN and we have made deals with Malaysia, China, and Australia.

Schleifer: How are your relations with the Egyptian authorities?

Schleifer: What news about Al Jazeera's plan to launch an English-language channel?

Al Ali: We started only a week ago building a news room for the English channel which we hope to launch early next year-perhaps in February, or March or April. In certain aspects, this will be an independent operation from the Arabic channel but they will share in basic product-pictures, news briefs, and facilities (new facilities that will house the two television services and the two web sites) but they will have their own reporters and presenters. We know this will be a much more difficult, much more competitive, environment than that faced by the Arabic service. So we must match that very competitive level of news gathering. And certainly the reporters working for the English TV service and the English website can cooperate and exchange. We expect good links there.

Schleifer: What is your financial situation? The last time we were in Doha you were about to be cut off from your subsidy.

Al Ali: That funding ended November 2001 and up until November 2002 we were breaking even. Right now we are in the beginning of our second year and I believe we will break even despite the expenses of war coverage because we are investing in a lot of new projects which will eventually turn a profit for us.