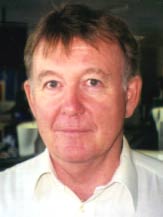 S. Abdallah Schleifer: Can you outline for us where Reuters TV came from, what it is doing now, and where it is going?

Rodney Pinder: Where it comes from is a very long story. It used to be called Visnews, and Visnews the global television news agency was part owned by NBC, Reuters, and the BBC. In the early 1990s Reuters bought out the other partners and it became Reuters TV. Reuters believed it had to have a video arm of its own for the future; it saw the future of the news, which is multimedia. We'd brought UPI's picture operations so we had still pictures, and it was a natural progression to go towards video news.

Today Visnews is fully integrated with Reuters. Our bureaus are multimedia; we have print journalists and TV journalists and photojournalists. We take the view that a proper multimedia story is not text with pictures bolted on; it starts with the thinking process, so that bureau staff start the news planning thinking of all disciplines. Every planning session is multimedia. Reuters bureaus have their specialties; they have business reporters, general news, political, sports, TV, news pictures working together. I think there is an enormous strength in our reporting so that TV people, much more than before, can draw on the journalistic skills of the Reuters bureaus globally. They aren't just out there doing their own thing but are enveloped into the whole fabric of Reuters global reporting.

Schleifer: That's a complete change from the old Visnews structure.

Pinder: That's right—there is a complete change; all of the staff have been thoroughly integrated. I myself am a global editor, so I'm responsible for all our global news gathering and production. I come from a text background—I started as a foreign correspondent with AP, then I joined Reuters in 1973. Although I was a writer in the field, I've always worked with TV people and cameramen. When I started on the news executive side—I was bureau chief in Washington, then in South Africa, then news editor in Asia—I was responsible for text and visuals as well; I was always working with television even though I'm not from a TV background. So for me be appointed global head of news for TV shows the extent to which we've become integrated.

Schleifer: What does that mean in terms of staffing? For example, you have a print correspondent—do you give him a mobile camera?

Pinder: We have mobile cameras all over the place, and in most bureaus we have separate specialists. In some small bureaus, for example in Kabul, our man there is a writer, a photographer, and he shoots video as well. But by and large we have specialists that coordinate and all work together. It's a big plus for both sides. The visual people always have to be there, they have to be on the scene—but the benefit to text is that the writer doesn't necessarily have to be there, so he can do other things too. In many cases we can have the print guy coordinating the story in the bureau and taking in material from photographers and cameramen in the field. That's the best way to spread your resources. When I was covering the peace talks in South Africa, I had the television cameraman on the doorstep while I was writing the story inside. He would come in, give me the camera, and I looked down the eyepiece to get the soundbite. I didn't need to be in two places at once, which gave me the competitive advantage. We frequently byline cameraman and photographers who phone in details of stories; and also the text guy sees the pictures and get therefore gets a much better field view.

Schleifer: One of the major differences between Visnews and Reuters TV is the importance of business news, which seemed insignificant to Visnews but is very important to Reuters. How does business news fit within the operation?

Pinder: We have a specialist financial TV operation, which delivers high-end financial news mainly, at the moment, for the business market. We work together in the same bureaus and we exchange materials, although they have their own specialist correspondents. They're broadcasters, they have studios, whereas we don't. Television is the quickest way to deliver market-moving news to specialists, to dealing rooms to current traders. It goes into PCs, so it's not a broadcast service in that sense. It includes news coverage, live events such as if Alan Greenspan gives a statement. We are moving more into the personal finance area too on the website. There is a product called Financial Video Online, which is produced by this specialist unit.

Schleifer: How many bureaus do you have and how are they organized?

Pinder: Eighty-three. They're virtually all staffed by full-time people with full-time cameras. It could vary from just one man to half a dozen camera crew and a couple of producers, depending on the size. We also use freelancers and stringers. Each area runs its own operation: I have three regional editors report to me, one for the Americas, based in Washington; one in London for the Middle East, Europe and Africa; and one for Asia, based in Singapore. We cover the world on a regional basis; we organize the coverage of each of the time zones within that time zone. Coverage is coordinated here, but the regions have their autonomy. Each has their own budget, which they are responsible for.

Schleifer: How are you affected by the move to Dubai as a regional center?

Pinder: Mostly it was just a move of premises. The new aspect is that we opened up a TV bureau in Dubai, which is the only news service agency TV bureau in the Gulf. It's an important region to cover.

Schleifer: In terms of how you cover the news, when it was Visnews you would shoot a story, and your producer/reporter would provide a story line. Has that changed?

Pinder: Basically it's very much the same. The most important thing that they come up with is a shot list. They provide a paragraph of introduction on what the story is about, they provide the shot list, and then provide the gist of story. It is not written as a broadcast script; it is a fact sheet so that people can tell what the raw footage is all about. The only broadcast script we do is for a product we have called Reuters Reports, which is the only voiced product we do. It's a fully scripted narrated package of the top dozen stories in the world, three times a day. It's an extra sign-on, and was originally designed for the Internet—you can see these pieces on Yahoo for example, in Yahoo Vision. But there is quite a bit of takeup among smaller broadcasters who don't have a big staff.

Schleifer: That's amazing that it was first designed for Internet, not the other way around. What other developments have there been?

Pinder: One thing that we're in the vanguard of doing is the digitalization the whole operation. We put everything on the server almost three years ago. In the old days tape editors used to cut stories and producers used to write to that, but now our producers do everything—they cut the stories, write, edit. They're using Avid Newscutter, all based on a Sony server. The bigger bureaus are expected to do this as well, which means they are sending us more completed pieces, ready to air. That has been a major change; it's a whole new culture in agency TV, and it is working pretty well. People now are required to be much more multi-skilled. We don't have cameras operators; all our people in the field are camera operators/producers, they are expected to be journalists. The days when a cameraman went out to cover an event, then went back to the bureau and waited for the next news to break, are over.

Another major development is that we are producing many more lifestyle stories; there is a bigger demand among customers now for the sort of story that affects every country everywhere, from traffic to crime to education to social problems to human interest. We've started a feed which we call the Life Feed, and are putting out between three and five stories a day globally on this sort of issue. Broadcasters love it. But again, this means that when the cameraman has finished a story, instead of waiting for another one he gets out there and develops it, which is again a huge cultural change, away from the traditional agency role of hard news coverage. But the core news requirement remains.

We're also putting out a lot more stories live. We have a customer base of 24-hour stations, and that plus the Internet means bigger and bigger demand for stories as they are happening. Still, only around thirty percent of our base wants live coverage constantly, but there is a bigger appetite now even for traditional broadcasters to break in. It's a difficult juggling act for us, because with feeds and specialist programs like Reuters reports, sports, life packages, and so on we only have six hours in a day that aren't filled and committed. So if someone is going live, ten to one it means we have to cancel a fixed feed, and we still have 60-70 percent of our subscribers wanting their fixed feed at that time.

Schleifer: In the old days with the wire feed it was customized; you had Reuters International but clients could sign up for Reuters Middle East or Reuters Europe. Are you doing the same sort of tailoring for television?

Pinder: Yes, it's very similar. You can subscribe to all of it or just bits and pieces of it. There's a special feed for the Indian subcontinent, for example, which is only regional content. They can take the global feed or the regional or both.

Schleifer: Another major difference is that in the days of Visnews it was a supplemental service. Broadcasters basically relied on their own people and a vast network of bureaus, which is largely gone now. They now rely on the agencies for breaking stories, except for major cities. How does that affect news agencies—does it mean you've expanded and prospered, now that you're a primary coverage provider?

Pinder: Yes, but you have to balance that against the lack of interest in the United States in international news. Undoubtedly there are fewer bureaus, so the dependence on the agencies, one or the other, for a breaking story is much greater, and the agencies hold up the coverage until a story jumps to sufficient importance for the broadcasters to send their own people in. In the case of the American networks what is interesting from my point of view, from all these years in the business, is that I don't think I've ever come across a time when there was such minimal interest in international news in the United States. At least the networks are always saying that—yet what we get from feedback from millions of online readers indicates considerable interest in international news by Americans. There may be an assumption of lack in interest that might not be the case.