Home / Interviews / Super News Center Setting Up in London for Al-Hayat and LBC: An Interview with Jihad Khazen and Salah Nemett

Super News Center Setting Up in London for Al-Hayat and LBC: An Interview with Jihad Khazen and Salah Nemett 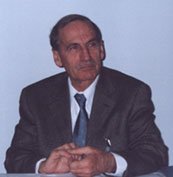 Jihad Khazen has one of the most impressive track records in Arab journalism, both in Arabic and in English. Khazen was managing editor of Beirut's English-language newspaper, The Daily Star, until the civil war put that paper out of existence, then managing editor of Arab News in Jeddah, from where he moved to England to set up and serve as editor-in-chief of Al-Shawq Al-Awsat-the first Saudi-owned but pan-Arab newspaper to be satellited to re-publishing and distribution points throughout the region. Finally, he moved to Al-Hayat, where he set up the newspaper and served as its first editor-in-chief. Now Al-Hayat's senior columnist and eminence grise, Khazen was called on not long after 9/11 to put together a news gathering alliance of LBC (Lebanese Broadcasting Corporation) and Al-Hayat, which is already partially operational. He is now editor-in-chief of Newsroom Ink.

The hands-on head of the new operation is managing editor Salameh Nemett, a Jordanian who worked for the BBC Arabic TV service and BBC Arabic radio and more recently with Al-Hayat as Amman bureau chief.

Schleifer: What is going on between LBC International, and Al-Hayat?

Khazen: This all started about a month after 9/11. The chairman of LBC, Sheikh Pierre El-Daher and the leading figure in advertising in the Arab world, Antoine Choueiri, who heads up his own agency selling advertising time for LBC and also serves as director of Tihama, which represents Al-Hayat, contacted me. LBC wanted to go into partnership with Al-Hayat to improve their political coverage-LBC was and remains tops in entertainment but it is weak in news. They wanted to improve their news product and Al- Hayat had a great name and an extensive staff and they had confidence in me.

I didn't want to leave my current job as columnist which I like and move into uncharted territory in television but then on the instructions of Prince Khalid (owner of Al-Hayat and Tihama) we negotiated with them and we have had several meetings since then and we have definitely have reached an agreement, which has not yet been signed only because the lawyers are hammering out the details.

The idea is this-we have established in London, at Al-Hayat's offices, Newsroom Ink (the obvious name, Newsroom Inc., was already owned by Rupert Murdock). This newsroom is in charge of all news and political programs for both the newspaper and the TV channel (LBC I). We have conference calls in the morning; the editors exchange ideas and information about stories available; the Newsroom commissions the stories and follows up our staff around the world, which is mostly Al-Hayat staff. Al-Hayat and LBCI own Newsroom Inc. fifty-fifty.

Schleifer: For that to work you have to train print journalists in TV journalism.

Khazen: We sent most of our staff to the Adma headquarters of LBC just outside of Beirut in batches of about five or six journalists week after week and each staff member became familiarized with TV news production. We have 69 correspondents around the world. There is an order of importance. We want to use all of them eventually but I expect daily TV stories from Damascus, Cairo, Beirut, Washington DC, the Palestinian territories, but not necessarily from Bonn, Rome, or Nouakchott, or Khartoum, where we have full-time correspondents.

We have just started producing packages, helping with breaking stories, which usually come quite unexpectedly, like the story about the people who occupied the Iraqi embassy in Bonn, so we did a phoner with the correspondent's picture on screen. Take today-the attack on Al-Qa'ida in Yemen-we had that covered both by phone with our full-time correspondent and they uplinked picture by satellite from local television and the correspondent voiced over the video.

Even though we are still learning on the job, so-to-speak, we have already done two half-hour interviews with Arafat-when he came out of the last (the second) siege. He did it with us before talking to everyone else. And we did two with Abu Mazin and most recently after the Jerusalem explosion that killed 14 people, we did a video interview with Dr. Ramadan Shallah, head of Islamic Jihad. Al-Hayat also interviewed the two Kurdish leaders Barzani and Talebani in Northern Iraq for LBC and we've interviewed, on several occasions, Montasser Zayyat.

Salameh Nemett: We are contributing news stories, interviews, and packages done by correspondents to LBC. We have 70 correspondents-both full-timers and stringers -across the world and many need more training but what is amazing is how quickly some of them can get right into preparing packages, writing scripts for editing.

Khazen: The Zayyat interviews were particularly interesting for us, since we were the first victim of Egyptian Jihad's switch from internal to external terrorism at the same time it was merging into Al-Qa'ida with its global agenda and all of this in response to my column rebutting Ayman Al-Zawahiri's booklet published in 1996-97 which attacked Zayyat. Letter bombs were sent to us here in London where we have a scanning machine and an X-ray unit. But the person responsible for those machines accidentally set off the letter bomb and he lost an eye.

Schleifer: Where does Newsroom Ink, this super news center go from here?

Khazen: Definitely this is at the back of everyone's mind. If it succeeds, then it could naturally lead to an LBCI/Al-Hayat 24-hour news channel. We just started and we are feeling our way. This merger in news gathering is new; we want it to serve the interests of both the newspaper and the TV station. That can be a problem. Suppose Al-Hayat gets hold exclusively of a good story; maybe you want to sit on until late at night, instead of immediately putting it out for broadcast, so Al-Hayat's newspaper competition does not get it. This is going to be a learning process. We already have a managing editor and we have four news editors, and we have two TV presenters and a technical staff and a studio. Still a few technical facilities have to be installed.

Nemett: I think this could turn into a multimedia organization 24-hour news service supplying print and audiovisual material via LBC which we are already doing and online in its own name-which we don't have yet-and if we are ambitious, we can turn this into an international news agency, both in print and then in TV, using the Associated Press as a model with its wirecopy service for print and its APTN service for television.

Schleifer: How are you recruiting?

Nemett: We haven't advertised job vacancies. We just ask around and find out who are the talented people who might be available. On 1 December, Hani Konnasy, who is the editor of APTN's Middle East customized coverage and a graduate of your Adham Center, joins us as news editor. Take our London anchor, who you were talking to earlier, Ghada Fakhri. She used to work with Al-Shawq Al-Awsat newspaper and then for Al Jazeera as a correspondent in New York and then she worked for Abu Dhabi Television as a correspondent and now we have succeeded in tempting her to join our project.

Al-Hayat's name has prestige and glamour. Al-Hayat stands for high standards in Arab journalism. Looking forward, I can see the audiovisual material that we will generate setting new and higher standards for Arab television. It will be the first time that television news is based on a widely respected network of print journalists and an editorial department staffed by some of the best writers in the Arab World. There is no other station or channel in the world that has done that. The transition is very laborious and difficult but it's worth the run.