Susan Irwin is founder and President of Irwin Communications, Inc., which she founded in 1985. Ms. Irwin began her career in the satellite industry in 1977 as a consultant to the Appalachian Regional Commission on a project which demonstrated the use of satellites to broadcast live educational programming to rural areas. 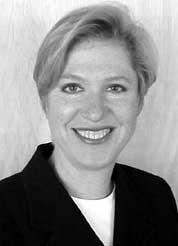 As a telecommunications policy analyst with the National Telecommunications and Information Administration (NTIA) of the U.S. Department of Commerce, Ms. Irwin implemented the Satellite Applications Program. The goal of this program was to stimulate the use of the newly launched communications satellites in the U.S. and in developing countries for delivery of public services. This program provided the first operational proof of the advantages of satellite communications for non-entertainment television, such as education, training and teleconferencing.

Subsequent to her career at NTIA, Ms. Irwin was special assistant to the president of National Information Utilities Corporation, a start-up company which developed a satellite and FM subcarriers distribution system to broadcast data to schools and private companies.

From 1983 to 1985, Ms. Irwin was a member of the start-up team of Private Satellite Network (PSN) and director of its Washington office. PSN pioneered the television industry. Ms. Irwin is widely published and speaks at satellite and telecommunications conferences throughout the world. She has been named one of the top 100 executives in the satellite industry by Phillips Publishing's Via Satellite magazine each year since 1989 and is a co-founder and director of the Society of Satellite Professionals International. In 1992, Ms. Irwin was inducted into the Teleconference Magazine Hall of Fame for her work in business television. Ms. Irwin holds an M.S. degree from San Francisco State University in Educational Technology.

TBS: Which area of the world do you see as being the biggest market for Internet via satellite services? Why?

Susan Irwin: Our research indicates that the Asia Pacific is the largest potential market for Internet services via satellite, within which, the largest concentration is in China and India. The reasons are clear. Huge population. Insufficient terrestrial infrastructure. And according to Singapore Telecom, while Internet usage is multiplying quickly in the region, existing terrestrial cable capacity is full. In particular, connecting the US, in order to reach the primary Internet backbone, is extremely extremely difficult, involving numerous links and routers, which results in delay and congestion. By 2004, there are projected to be more than 200 million Internet users in Asia, which is 50% greater than the number of projected users in Western Europe and three times greater than in North America. The Asia Pacific will continue to have inadequate cable coverage within the region, as well as from the region to other parts of the world. Satellite provides the broad coverage that is needed and avoids the congestion of the terrestrial networks.

TBS: What are the advantages of delivering Internet via satellite? Disadvantages? How do cost (both for the service provider and the end user) and performance of satellite-based Internet services compare to those of terrestrial?

Irwin: Satellites have traditionally served two basic roles in the global telecommunications infrastructure. One is that of providing transmission services in areas of the world that have limited terrestrial bandwidth. As terrestrial networks have been built out with high speed fiber optic cable, there has been a decreasing role for satellites providing basic telecommunications services. Very simplistically, when point-to-point transmission is the requirement, fiber is the preferred mode of delivery.

The Internet was originally designed to be a point-to-point network, therefore ideally suited to the capabilities of fiber. However, the bandwidth requirements for the Internet have far exceeded the installation of fiber optic cable, particularly in developing regions of the world, such as the Middle East. Therefore, satellites provide an excellent alternative for point-to-point Internet traffic. Since the US Internet backbone contains 80% of the content on the network, Internet users throughout the world must have access to the US backbone. This proportion will decrease, as regional backbone networks are more fully developed in Europe, Asia and South America, but there will continue to be a need to gain access to these regional backbones.

However, there are other benefits that satellites offer, besides providing bandwidth when there is no fiber. Most Internet traffic is asymmetric, which also lends itself to satellite transmission, since satellite links can easily be configured to provide varying amounts of bandwidth. Also, satellites can be used to provide the high bandwith return link, with a terrestrial circuit used for the lower data rate requirement. Additionally, ISPs are often forced to use convoluted routing, which can cause much worse delays than those associated with the much maligned satellite latency problem.

The other role that satellites have played is the one that uses its inherent strengths: providing point-to-multipoint transmission over a broad geographical area. Therefore, broadcasting of audio, video and data from one point to many is almost always more cost-efficient using satellites than using land lines.

The most recent growth in Internet traffic is in multicasting and caching of high speed, high bandwidth content, such as streaming media. The advantages of using satellites for these applications far outweigh its disadvantages, since they involve point-to-multipoint distribution, which utilize the inherent benefits of satellites. It's envisioned that these applications will continue to grow in popularity, overtaking the predominant use of the Internet for transactional applications, such as e-mail.

TBS: How will satellite delivery of Internet services have an impact on regions of the world that are not as advanced in Internet use as a country like the United States?

TBS: Can you give us an idea of how you see this developing over the next few years? Who are the industry leaders?

Irwin: I see a future of hybrid transmission solutions being used for the Internet, to take advantage of both wired and wireless technologies, employing whichever one is most appropriate and beneficial for a given application. Software and hardware is being designed to eliminate or compensate for the technical problems associated with satellite and to provide the links between the various points of presence and the different transmission systems. Also, the expertise that is needed to help ISPs and corporations understand how to use satellite Internet services needs to be further developed, so that the myths that surround the issues related to satellite Internet transmission can be diffused. Satellite Internet services are quickly being tested and proven, both for basic connectivity to the Internet backbone, and for providing advanced services, such as multicasting, webcasting, caching and streaming, and will, therefore be increasingly incorporated into the system designs of the Internet service providers and users. Satellite operators, such as Loral, Intelsat, New Skies Satellite and PanAmSat are providing backbone links to ISPs and to the enterprise market, while Gilat and SES Astra are developing consumer Internet services. A wide range of software solutions for satellite Internet services are being developed by startups as well as established companies, including NDS, Fantastic Corporation, Starburst and iBEAM. And the next generation of broadband satellites, such as Hughes Spaceway, Astrolink and Skybridge, are being designed specifically to provide Internet services.

TBS: Gustav Hauser of Hauser Communications says that given radical reductions in satellite telecommunication costs and rapid improvements in broadband technology, the time is not too far away when the Internet via satellite will be the platform for all broadcasters. Even if a broadcaster is only interested in its own local market, it will be more economical to reach that market via an internet satellite platform than by terrestrial transmission. This means that all broadcasting will be, whether intended or not, transnational, global by virtue of the Internet. Do you agree, and why or why not?

Irwin: Broadcasters are inherently slow to adapt to change, and are being dragged kicking and screaming into the digital era. I believe the terrestrial broadcasters will use IP (Internet Protocol) first for distribution of content to news directors and editors who need to gain quick access to information for previewing and editing it on their PCs, and perhaps for accessing news in hard to reach places, as the next step in digital satellite news gathering. Direct to home (DTH) satellite services are already enhancing their television offerings with delivery of Internet to the home. And delivery of Internet content to cable television head ends via satellite is the first step in the cable operator providing Internet services to its subscribers.

However, unlike Mr. Hauser, I don't see satellite distribution replacing cable or terrestrial broadcasting, except in areas that cannot be reached by any other means. Even if there is a convergence of the PC and the TV, (which I believe is many years off), there will still be wired solutions to bring signals into the home. Satellites will thrive as a transmission solution for Internet traffic, however, only as one component of a sophisticated telecommunications system.