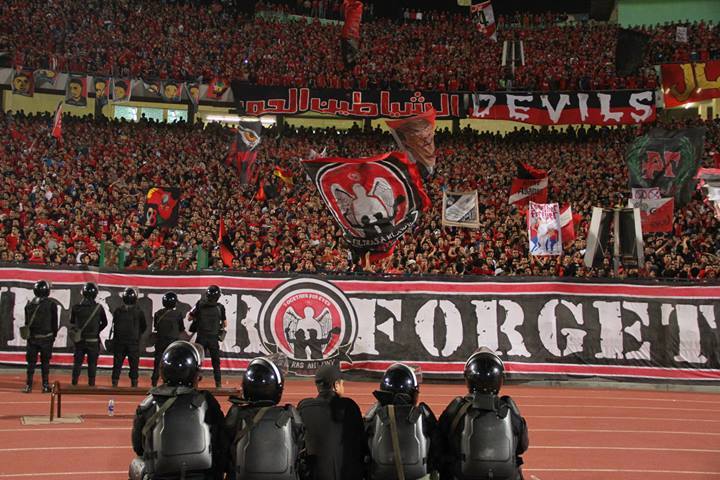 CAIRO—Sports media’s increasingly negative portrayal of a group of passionate football fans has alienated the security forces controlling match attendance. Many enthusiasts credit government antagonism with their unfavorable depiction. Ultras Ahlawy, the organization under which the supporters gather, has had a strained relationship with each governing regime since its members’ prominent involvement in Egypt’s January 25 Revolution.

Ultras Ahlawy formed in 2007 after years of supporting the Al Ahly club under a different name. Its avid members have transformed the football experience. Their cheers channel onlookers’ insatiable energy into dynamic motivation for players.
During Egypt’s 2011 uprising, protestors welcomed football’s solidarity into the political realm. Inside sports stadiums, football chants became tirades against the status quo and previously lighthearted songs echoed protestors’ revolutionary voices. Ultras demonstrated their familiarity with Egypt’s security apparatus from the front line of political demonstrations. Nayera Behery, an activist who stayed in Tahrir Square for the 18 days leading up to President Hosni Mubarak’s resignation, emphasized that each ultra acted on his own behalf. “[Ultras] played a big role in the revolution. They stood confronting the police forces, and they protected us overnight.” In framing the January 25 Revolution as a conspiracy, sports media presenters pointed to ultras’ unofficial participation as a sign that the organization was conspiring against the government.
Tragedy struck the group on February 1 of the following year. In what has become known as the Port Said Stadium Riot, 74 young Egyptian men were massacred at a match between rivals Al Ahly and Al Masry. Aided by security officials, Al Masry supporters broke into the stadium after their team’s victory. The ensuing invasion of Al Ahly’s fan territory pitted adversarial fans armed with knives and other makeshift weaponry against trapped ultras. Hundreds of people were severely injured.
While there had always been tension among fans of opposing teams, the stampede marked a dangerous escalation: Football matches were no longer safe to attend. Domestic games were postponed in the following years. When they resumed, fans were no longer permitted in the stadiums.
After the events at Port Said, sports media assumed a conspiratorial tone. Many reporters held negligent police officers responsible for the deaths, while other members of the press accused angry Mubarak supporters of instigating violence. Ultras Ahlawy was consistently blamed for its antagonism with current and former regimes. Although the 2011 revolution had successfully displaced Mubarak, enmity persisted between Ultras Ahlawy and the interim military body ruling the country, the Supreme Council of the Armed Forces (SCAF). Rumors swirled that ultras were building alliances with members of the Muslim Brotherhood. In a renewed wave of political demonstrations, ultras retaliated against this narrative and the media that promulgated it.
It had not always been like this. Sports media supported Ultras Ahlawy in its early days for the athletic excellence the group inspired. “The problem with sports media is their hosts’ constant suggestions that there is a conspiracy created by a young group of football fans,” one ultra said. The young man refused to identify himself for fear of police retaliation but agreed to be called Hussein for this story. “We aren’t part of a conspiracy, and we don’t want to destroy the country. We just want to be treated like humans.”
Hussein and many other ultras used to attend every match. “We went to the stadium to cheer for the team and players. We don’t care about anything except the team.”
Popular sports talk shows, presented daily during primetime, propagated the alienating narrative: Ultras Ahlawy was a political organization that threatened the government and the people. Prominent host Karim Hassan Shehata criticized Al Ahly for allowing “young boys” to deteriorate relations among football clubs. One of many to extrapolate suspicious conclusions, fellow presenter Khaled al-Ghandour asserted, “[Ultras] say they want a separated court for the Port Said case… They are doubting the Egyptian judicial system.” Guests invited to speak overwhelmingly shared this narrow perspective. General manager of the Zemalek Club, Mortada Mansour, famously denounced ultras. “We are in a battle with black terrorists. They are the ones burning the churches. They are Muslim Brotherhood,” he said in a phone conversation on the television channel al-Hayat.
On February 8, 2015, Egyptian Football League fans were at last permitted to spectate again. The inaugural game was set to take place at 30 June Stadium between Zamalek and ENPPI. In anticipation of the match, Mansour announced that tickets would be limited and that no one without a ticket would be permitted to enter.
The meager security provisions proved insufficient. Before the match began, fans and security began jostling one another at the stadium’s entrance. Police fired tear gas at the mass pressing forward. As they struggled to evade the painful gas, fans piled into the narrow gated tunnel that led to the arena. 28 of them died in the stampede.
Sports media intensified the attacks they leveled against Ultras Ahlawy following the disaster. Shehata described “barbaric” fans whose lack of wisdom caused their own deaths. As part of this categorical narrative, presenters like al-Ghandour commended security for doing everything within their power to control the unruly crowd. The Interior Ministry reminded media sources that the victims were reportedly trying to gain entrance without tickets.
Ultras Ahlawy continues to be the main source of football cheering today. However, because of the reinstated ban against game attendance, they are forced to show their support from afar. Violence between fans and security forces has hardly ceased; it has simply moved outside of the arena.

About Kareem Hatem and Isabel Bolo