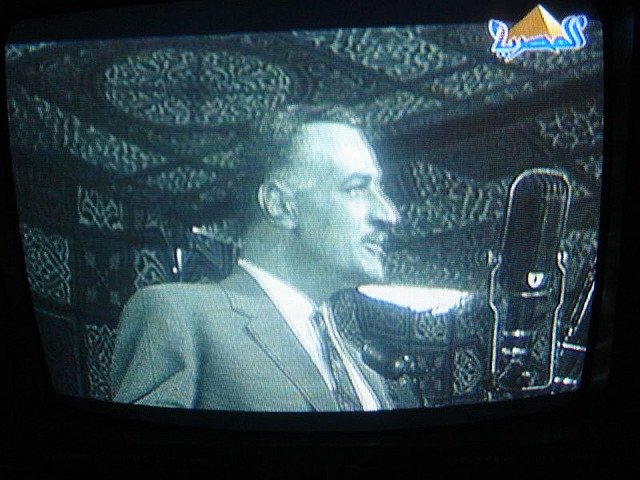 Arab media has been a powerful tool in the hands of Arab states since the decolonization period. The Nasser regime used radio, television and print media to mobilize support for Egypt’s Non-Aligned and Pan-Arab foreign policy, and apply methods of mass media propaganda developed in Europe, establishing a model for the region. The power of media to function as a subversive force was seen in the 1970s, when cassette tapes of preachers denouncing governments for tyranny and corruption spread in Egypt and Iran.

In the 1990s Egypt began to lose its hegemonic position in Arab media with the rise of Arabic satellite news and entertainment media established by Gulf Arab states. Saudi and Kuwaiti businessmen with close ties to the Saudi royal family set up the news channel MBC and Qatar followed in 1995 with Al Jazeera. MBC expanded to bring American and British comedy and drama and then added the news channel Al Arabiya in 2003, which was intended to challenge Al Jazeera’s dominance.

An explosion of news, religion and entertainment channels came into existence, serving as mouthpieces for businessmen, religious sects, political movements and governments in what political scientist Marc Lynch called the “new Arab public sphere”. Some of its main features included a strengthening of Pan-Arab identity and awareness (perhaps even producing it among some communities where it did not effectively exist) and providing a forum for two distinct political positions that characterized Arab politics in the period up to the Arab Spring uprisings in 2010-11: an approach on Al Jazeera sympathetic to Islamist groups across the region and more conservative pro-Western approach in Saudi controlled media.

The Arab uprisings came at the moment of a third stage in the development of modern Arab media: that of social media. Twitter, YouTube and Facebook, as well as the already existing satellite TV stations, became fields for bitterly contested conflicts between youth-driven protest movements and governments who were caught absolutely unawares due to a variety of factors: close cooperation with Western governments, elaborate security apparatus and the arrogance that comes with being in power unchallenged for so long. These tools of communication were used to mobilize protesters in Bahrain, Egypt, Syria, Yemen, and previously in Iran in 2009, but governments fought back: Bahrain engaged in a sophisticated campaign of propaganda, witch-hunt and intimidation using both traditional and new media.

Media in the post-Spring Arab world currently has been targeted by the forces of the state in their counter-revolutionary pushback. Gulf governments have focused on social media in particular. In 2011 a Saudi royal degree specified a ban on publishing anything deemed as contradicting sharia law, disrupting state security or serving foreign interests. Kuwait passed a law in 2014 establishing a Commission for Mass Communications and Information Technology to monitor social media. Saudi Arabia’s courts have gone as far as to issue death sentences for opinions expressed on social media (for example, apostasy charges against Palestinian poet Ashraf Fayyad). The Saudi Mufti has repeatedly denounced social media as a source of social immorality, and issued a fatwa in 2011 deeming expression of opposition via street protest or petitioning the country’s rulers as impermissible.

Since the military coup that removed the elected post-uprising government, the Egyptian government has used traditional preferred instruments of television and print media for propaganda and control. Particular use is made of TV presenters who talk straight to camera on late-night shows attacking particular individuals or groups in society, or foreign governments, for positions deemed treacherous. These presenters are widely assumed to be linked to the intelligence services; while comedian-critic Bassem Youssef, who presented a hugely popular post-uprising show along the lines of The Daily Show in the United States, was taken off air, firstly from the Egyptian private channel his show appeared on and then, following the coup, from MBC, the Saudi-dominated Pan-Arab channel he had briefly moved to.

Another important feature of Arab media is how it has become an arena for the Sunni-Shia sectarian schism. Though this sectarianism emerges from the turn to religious politics following the perceived failure of the secular Arab nationalist paradigm in the mid-20th century, it was not until the invasion of Iraq in 2003 that it took on the virulent character it has today. Faced with the rise of Shia Islamists as the dominant political force in Iraq, and whose ascendance was made possible through American intervention, insurgent forces under the al-Qaeda banner killed Shi’ite civilians, politicians and religious figures in mass violence that was accompanied by a rabid sectarian discourse. Shi’ite militias hit back, creating a civil war like situation in Iraq between 2005 and 2007.

The strength of Hezbollah in Lebanon (surviving war with Israel in 2006) and the Bahraini uprising in 2011 was to Saudi Arabia further proof that Iran planned to overturn the regional order. Media in all its forms is a vehicle for fighting back, drawing on the anti-Shi’ism at the heart of the Wahhabi Salafi ideology sponsored by the Saudi state. Non-Salafi Islamists joined in: on Al Jazeera, Egyptian preacher Yousef al-Qaradawi described the Bahraini uprising as a Shi’ite revolt and depicted the war against the Assad regime in Syria as a Sunni jihad against infidel Alawis. Iraq and Kuwait-based Shia have been prominent in using TV channels, some of them based in the UK and the USA, to incite against Sunni Islam.

In the age of the Arab Spring, media has been revamped and brought back into action as one element of a multi-faceted campaign involving the law, religion, surveillance and forces of coercion to face a range of internal and external enemies seen as challenging the very survival of governing elites. New media were momentarily a weapon against these entrenched systems of rule; for now, the rulers have mastered the new array of technologies and are back in command.

Andrew Hammond is a doctoral researcher at St Anthony’s College, University of Oxford. He is the author of Popular Culture in the Arab World: Arts, Politics, and the Media, What the Arabs Think of America, and The Islamic Utopia: The Illusion of Reform in Saudi Arabia.