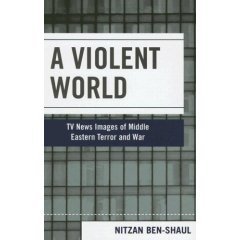 Having mainly written on cinema during his career as a lecturer on film and television at Tel Aviv University, Nitzan Ben-Shaul forays into new territory in his most recent book A violent world: TV news images of Middle Eastern terror and war by looking at television news. He sets out to apply cinematic analysis techniques to news without producing an overly deterministic analysis. While recognizing that there are significant differences between film studies and news analysis, he nonetheless finds points of convergence.  He uses three major sources: coverage from CNN, the Israeli Broadcasting Authorities’ Channel 1 and Channel 2, and the Palestinian PATV.

Building on a Gramscian notion of hegemony in which elite interests are presented as universally beneficial, he argues that post-modernism, derived from post-Fordist globalization, is the dominant ideology in the US. Inherently de-centered, this core ideology conceals configurations of political economic power. Thus the US can maintain global relations in which peripheral elites engage in “double-talk” aimed at maintaining the autonomy of the state apparatus while enlisting the support of the superpower. These ideologies, he argues, are embedded in television as a medium and news as a format. Thus he rejects a conception which envisages the media progressing inevitably towards objectivity. Rather he argues for a critical media theory which examines the production of dominant ideologies through the media.  It is these ideologies, he suggests, which work to legitimate the state apparatus.

Ben-Shaul uses qualitative content analysis to compare three stations’ coverage of two different types of conflicts. First, the “War on Terror,” or what he terms a “direct core-periphery conflict,” and second the Al Aqsa Intifada, an indirect one. Unfortunately he spends the most time analyzing CNN, which has been the subject of numerous content analyses, and the least space analyzing PATV, which has not previously received much scholarly attention.

While the first half of the book lays out his theoretical and epistemological assumptions,  the second half seeks to understand how different national news stations cover the same emotionally-charged events, and in this respect he succeeds. He identifies two frames that dominate coverage of violent news by the PATV and the two Israeli channels. The first frame he describes works to devalue the emotional standpoint of the other side and to embed the dominant ideologies of their respective elites. In the Israeli channels, this frame depicts Israelis as besieged victims, and in PATV, it depicts a sense of heroic sacrifice. The second frame is employed to garner support from the American superpower. Yet Ben-Shaul’s analysis of CNN unfortunately outstrips his analysis of Israeli and Palestinian television news coverage.

After identifying these potent frames, however, he jumps to the conclusion that they support the production of a post-Fordist globalization discourse in which the ideologies of core (American) elites and dependent peripheral elites (Israeli and Palestinian) are embedded. The conceptual overreaching from micro-frames to macro-processes is not fully explicated, leaving the two feeling disjointed. Nonetheless Ben-Shaul makes some interesting and rather unpopular insights into news coverage of violent events, such as the American coverage of the September 11 attacks and the War on Terror, the Palestinian advocacy of martyrdom for children, and the Israeli coverage of its military campaigns against civilians. In his analysis of CNN’s coverage of the Bin Laden tapes, for example, he describes how the audiovisual content of the tapes betrayed the perspective presented by the reporter, a reflection of the dominant elite ideology promoted by administration officials that the US faced a dangerously sophisticated global enemy. On PATV, the ideology of martyrdom (shahada), which can be traced back to radical Islamic movements, is explicitly intertwined with religious and national symbols appropriated by Arafat and the secular Palestinian Authority.

One of his most interesting findings is that Israeli television covers terrorist attacks within Israel differently from those on settlers. Coverage of suicide bombing attacks in Israel are frantic and chaotic, promoting the idea of the unity of Israelis across ethnic and political lines, and are framed as the work of evil Palestinians who can have no possible motive other than anti-Semitism and hate. Settlers, however, are portrayed as outsiders and  attacks against them are covered in a similar way to Palestinian attacks on military targets. This audiovisual coverage apparently “contradicts the settlers’ constant appropriation of the siege ideology to justify their messianic territorial interests.”

For its willingness to take on and expose the dominant elite ideologies, this book deserves credit. Though not written for a general audience, specialists who can wade through the dense language, dependent clauses and compound strings of adjectives that clutter this book will discover some interesting insights into the ways audiovisual choices in news coverage provoke certain responses. The book is a valuable contribution to comparative media analysis and specifically to studies of Palestinian television, which have been few and far between.

Courtney C. Radsch is the Arab Media & Society book reviews editor. She is also a freelance journalist and blogger who is pursuing her PhD in International Communication at American University in Washington, D.C. where she is writing her dissertation about the Arab media's impact on politics.