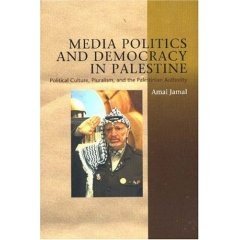 Media Politics and Democracy in Palestine, by Amal Jamal, provides a thorough examination of the “interdependence between institutional and cultural developments in Palestinian society” during the post-Oslo period.  Relying primarily on discourse analysis, Jamal does a superb job of both describing and critiquing the institutional power structure of the Palestinian Authority (PA) between 1994 and 2000. He then goes on to investigate the effect of this regime on the emerging public sphere, ultimately exploring the relationship between the dominant political elite of the PA and social movements within Palestinian society, including NGOs, the women’s movement, and the Islamic movement.

Although Jamal uses media as a common thread to connect these examples, only one chapter of the book is devoted specifically to discussing the role of the Palestinian communications regime in shaping political developments.  While he provides several other examples of how media are used by different social movements, he does not produce any real thesis or conclusions about the role of media in Palestinian politics and democracy.  In addition, Jamal’s focus on the 1994-2000 period may only be of interest for historical reasons since it fails to lend insight into more recent developments—the second Intifada, the death of Yasser Arafat, and the election of Hamas. These developments have arguably altered the politico-cultural scene beyond comparison.  In addition, Jamal fails to adequately discuss the influence of satellite media as a major source of news and information in the Palestinian Territories. Thus, while Media Politics and Democracy in Palestine is useful as a constructive critique of the Palestinian Authority’s relationship with the public sphere in the post-Oslo period, its narrow conceptual and historical focus limits its value as a resource for practitioners and theorists interested in media politics and Palestinian democracy today.

Despite the scant attention to Palestinian media, Jamal’s discussion of media politics in Palestine in the latter half of the book is insightful. It illustrates how Palestinian media politics are manifest in two primary ways: first  “as a means of control;” second “as a field of contention between different political agents and a way of articulating different world views.”  In his chapter “The Constitutive Press:  Mechanisms of the Palestinian Regime,” Jamal succeeds in demonstrating how media politics function in both of these dimensions.  First he examines how the PA’s sought “a policy of patronization, politicization, and national reinforcement vis-à-vis the media” through its expansion of power centralization processes into the realms of speech and publication.  He does this by succinctly analyzing the administrative, procedural, legal, and discursive mechanisms the PA used to create a media regime that often limited freedom of expression or restricted the publication of certain information.  Second, he does a good job of using the national press (focusing mainly on the three major dailies during the post-Oslo period, Al-Quds, Al-Ayyam, and Al-Hayat Al-Jadida) as an example of a realm of civil society that was constantly negotiating its structure and role in Palestinian social life with the PA.

In the subsequent chapters on the women’s and the Islamic movement, Jamal attempts to show how both groups used the media to express their views and publicize their opinions. He uses discursive analysis of the feminist paper Sawt Al-Nisa’a (Women’s Voice), and the Hamas-affiliated weekly Al-Risalah to demonstrate how both publications were set up, but because of his admitted lack of data on media consumption and exposure he has limited ability to draw any conclusions about the effect of these movements’ utilization of media.  Thus, while it is descriptively interesting to discover how these papers represent a segment of two significant movements, the causal or constitutive effects of the publications on public opinion, pluralism, and democracy in Palestine are unclear, and the representation of these particular publications in terms of the larger women’s and Islamic movements is not discussed.

Overall, Media Politics and Democracy in Palestine is a useful resource for understanding the post-Oslo dynamics of the PA and the public sphere in general, but it fails to offer conclusive insights on the political impact of the media in particular. Indeed, by focusing on the PA, NGOs, and popular movements, the book provides an interesting examination of Palestinian politics, but it gives only secondary attention to the specific role of the media within these other contexts.

Julie Norman is a PhD student at American University's School of International Service whose work focuses on Palestinian youth movements.