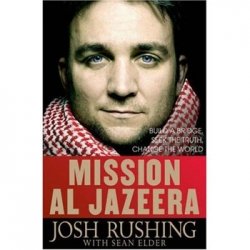 The cover of Josh Rushing’s Mission Al Jazeera broadcasts its genre: with a full-size glamour shot of the author, extremely blue eyes staring straight out and a crooked smile on his face, it’s clearly a celebrity biography – even the telltale “with Sean Elder” identifies it as partially ghost-written. But it’s a celebrity biography with a difference: Rushing is wearing a Palestinian kaffiyeh, and his three-day stubble could be read as belonging to either a Hollywood action hero or a resistance fighter.

Rushing first came to fame for his role in Control Room, the documentary on Al Jazeera in the Iraq war. Rushing’s role is as a spokesman for the U.S. military who evolves from a cliché-spouting PR robot to a more thoughtful position. In Mission Al Jazeera, Rushing reveals that what appears in the film to be a long series of discussions stretched out over months was edited from a single 45-minute conversation between himself and Al Jazeera producer Hassan Ibrahim. But having revealed that the film’s editing had shown an image of personal growth for him that was not fully grounded in reality, he reverses himself: “Noujaim and Bacha were following lesson number one in Hollywood script writing: your hero must have an arc… he’s got to change and that’s why people fall in love with him” (99-100). Mission Al Jazeera represents Rushing’s attempt to establish a similar arc for himself and harness the power of that narrative to an argument in the station’s favor.

For its first half, the book follows the form of the celebrity bio genre: there’s the all-American upbringing and youth, the labor in obscurity as Rushing goes through Marine boot camp and rises through the ranks of the Marine Corps’ office of public information. There’s the big break, as he is assigned as the public information officer to Al Jazeera during the Iraq war solely because he was the only officer to show any interest in them, and then agrees to appear in a student film that later turns out to be Control Room. There’s the unexpected fall, as Rushing’s role in Control Room puts him in bad odor with his superiors and forces him to resign his commission; and then the (unexpected, yet foreshadowed) recovery as he signs on as a correspondent for Al Jazeera English.

But then the book turns to a political argument and a defense of Al Jazeera. Rushing leads the second half with a summary of the history of Al Jazeera and its impact on the Arab world, drawing heavily on the works of Adel Iskander, Lawrence Pintak and Marc Lynch, among others. The summary will be familiar to anyone with even a cursory interest in the Arab media. He essentially follows Lynch’s thesis from Voices of the New Arab Public, identifying Al Jazeera’s impact as opening up a new political dialogue in a region that had been stifled by state-owned media. Rushing’s argument is also a familiar one: that the American government needs to engage with Al Jazeera and defend its policies on air instead of “leaving the network with the think-tank extremists of the right and the blogosphere idealists of the left.” (173)

Despite promising a look behind the scenes at Al Jazeera English, Rushing doesn’t deliver much. Any confirmation of rumors about tensions between the Arabic and English channels, or about the rise of Wadah Khanfar as overall head of the station, will have to wait for a book by someone less invested in advocating for the station. The one exception is a short discussion of Rushing's attempts to sell American cable executives on the new network.

His first approach was to appeal to his military background to defuse any patriotism-based resistance to Al Jazeera. But this line of argument was brushed aside by cable executives for commercial reasons. “In their experience, Americans just don’t care about international news. How do they know? Their customers call and tell them what they want. And what do Americans want? Executives across the nation echoed the same answer: twenty-four hours of NASCAR, seven days a week” (197).

And so the network’s approach to America has taken a different turn. They’ve aggressively moved into YouTube, making all their reports available online. But they’ve also actively courted a niche audience in America, and it’s no accident that one of Rushing’s first stops on his book tour was as a guest of Jon Stewart on The Daily Show. It was not the first time Al Jazeera English had been featured on the program: one month after the station’s launch, a segment aired lampooning them as too naïve and too idealistic to cut it in America’s entertainment-oriented news industry. It was perfect PR for Al Jazeera, branding them as the station Daily Show watchers can turn to for serious news.

Rushing plays to the American left’s positions, and uses their vocabulary, throughout the book. His crack about Americans wanting to watch NASCAR might well be true, but it also plays to his target audience’s prejudices; in another case, he refers to a Republican political operative as “drinking the Kool Aid” (53). His discussion of the inner workings of the American military information operation during the opening of the Iraq war are heavily informed by Norman Solomon’s War Made Easy. Even when he argues against conventional wisdom on the left of American politics, as when he claims it is impossible that the military had targeted an Al Jazeera journalist killed during the Iraq war, he argues within a frame of reference established by left-wing writers and bloggers.

Tom Scudder is a freelance editor and writer, and a former news editor for Middle East Broadcasters Journal.