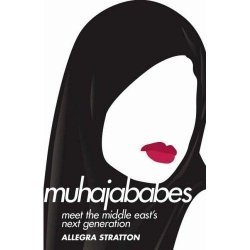 ‘Muhajababes’ is hardly a title most academic journals would be interested in.  But to ignore this book, which sets out to investigate the ‘new Middle East—cool, sexy and devout,’ purely because it targets a wide audience would be a grave mistake.  In fact, there are very good reasons to take this book seriously.  First, its author, Allegra Stratton, is herself a media professional (a BBC producer) who has valuable industry insight to bring to the study of Middle East media.    Second, Stratton succeeds in moving ‘behind the scenes’[1] to look at industries of cultural production from the inside.  She certainly does not neglect cultural consumers, but also investigates a range of producers and sites of production from Zen TV and Superstar auditions to EMI Arabia and Hizbullah’s Central Internet Bureau. Third, this book breaks the mould of popular literature on media and society in the Middle East.  Out with Al Jazeera, democracy, terrorism, and Iraq; in with popular culture, fashion, TV preachers, and the hijab.  For its willingness to ask questions about the trajectory of Arab Islamic modernity which are so often left unasked, this book deserves to be taken seriously.

The book begins with an important insight: the population of the Middle East is younger and more educated than ever but remains locked in economic stagnation.  As a recipe for long-term unrest, this predicament is the lens through which Stratton explores today’s generation of middle class Arab youth.  Flitting from Beirut to Damascus the long way—via  Amman, Cairo, Dubai, and Kuwait—this work leans more towards a ‘multi-site’ travelogue than a ‘multi-year’ ethnography; but then it never claims to be anything more than a piece of extended journalism.  Exploring popular understandings of what it means to be young, Stratton finds two principle cultural developments—the rise of Prince Alaweed’s video-clips and the emergence of Islamic stars such as TV preacher Amr Khaled and singer Sami Yusuf.  The equation she draws is that the ‘space between the video-clipper and the veiled-again’ is ‘diminishing.’(199)  This is not cultural collision so much as cultural convergence; ultimately Stratton feels that alternative expressions of youth identity are being increasingly clouded out.  In her view, the effect for young Arabs is ‘suffocating.’

The evidence Stratton assembles towards this conclusion is for the most part compelling.  She learns why Zen TV, the only Arab youth channel to tackle ‘drugs, sexuality, relationships,’ was axed—because for Rafik Al Hariri and its Saudi backers ‘there was more talking around and about sex than pictures of sex’.  She discovers that the lack of adequate copyright laws across the region has left the door open for ‘those with funding already’—Prince Alaweed’s Rotana—to dominate the region’s popular music despite having ‘no subscriptions and modest advertising revenues.’  She finds that the boundaries between popular culture and religion are being increasingly blurred by the Sami Yusufs and the Amr Khaleds who advocate a brand of ‘trendy personal piety’ which seamlessly combines the modern, the authentic, and the sacred.  And she locates the fusion of national-regime messages and popular culture in new media: Amr Khaled’s call to entrepreneurial spirit on satellite TV is well in keeping with Gamal Mubarak’s free-market pitch for the Egyptian presidency whilst Syriatel users receive personal text-message invites to join a pro-Bashar Al Asad march.  In these ways, Stratton really captures the emergence of a highly popular mass-mediated culture through which powerful forces of conformity work to ensure allegiance to religion and state.

But there are problems with this analysis.  First and foremost how far is it possible to investigate dominant trends in youth culture through observations which relate to the way women dress and are represented?  Sure, the hegemonic cultural types which shape what it means to be a young woman in the Arab world —the ‘video-clipper’ and the ‘veiled again’—are converging. But what do these types have to say about men? Should we be on the look-out for muhajabeards? Of course men are deeply implicated in the way women dress in the Arab world, as Stratton demonstrates. But this observation would tend to point to conclusions about the reproduction of gender inequality rather than the production of cultural conformity across Arab society.  Looking at the veil in terms of gender politics would be in keeping with studies which stress the role of either patriarchal values or conversely women’s agency in veiling,[2] but Stratton’s key concern here is not gender politics so much as youth culture.   In other words, the entrenching of cultural difference by gender is perhaps problematically used to argue for the entrenching of cultural conformity more widely.

Also, Stratton makes a very serious blunder when she sets out to ‘find an alternative youth culture to the adoration of video-clips’ purely because she had ‘had enough of the ubiquitous, over-produced prostitution of video-clips and Superstar—no innovation, just reheated old classics in dodgy microwaves.’  This is problematic for two reasons.  Firstly, it assumes that all video-clips are the same.  Clearly there are structural factors which constrain the diversity of video-clip productions (just as there are great similarities between the formats of CNN and Al Jazeera), but they are certainly not all the same.[3]  Sami Yusuf is not Haifa Wehbe – indeed, to some extent he is her antithesis.  To conflate the video-clip phenomenon so wantonly blinds her to crucial insights, and stalls the search for answers to her key question: what do ‘the Middle Class Arab kids look like?’  Secondly, she argues that video-clips are ultimately bad news, comparing them to the ‘pre-Beatles hit parade’ which was apparently ‘controlled by fusty middle-aged impresarios who second-guessed youth tastes.’  Whether video-clips are good, bad, middling is beside the point.  They are popular—the key is to understand why they are popular, and how they help construct notions of what it means to be young for young Arabs.  Indeed, the comparison is not helpful given that in the West, youth bands, music labels, reality TV pop shows like ‘Pop Idol,’ and the big music channels are largely controlled by professionals who second-guess youth tastes.

Finally, there are some tactical errors in the book which should never have made the final proof.  One is her acknowledgment that her boyfriend chose the book’s name while lying in the bath. Whether she intended it or not, this conjures images of Stratton struggling to determine what was really important about her book. Another is her shot at summing up with a sound-bite.  From all the book implies, muhajababes have not ‘sparked a revolution’, but are responding over the long-term to gradual social shifts in which media have played no small part.

Despite these points, this book is engaging and readable, and should certainly be taken seriously by readers of Arab Media & Society.

George Weyman is the managing editor and webmaster of Arab Media & Society.  He has an M.Phil in Modern Middle Eastern Studies from the University of Oxford and has previously worked at the Panos Institute and Sky News.