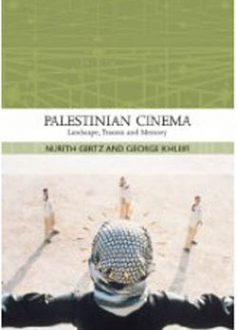 Nurith Gertz and George Khleifi’s book, only recently translated from the original 2005 Hebrew version, details the history of Palestinian cinema and explores a range of themes that have emerged in over seven decades of Palestinian film.  As is relevant in all discussions of Palestinian art, the authors highlight the political nature of this medium and examine the role of these films in the broader battle against the Israeli occupation.  Ultimately, this book traces the national struggle for Palestinian sovereignty through filmmakers’ representations of space, time, identity, and memory throughout four distinct artistic periods that correspond with the major political events that have characterized and defined the occupation.

Gertz and Khleifi begin by laying out the history of the four periods of Palestinian cinema.  The first period (1935-48) occurred prior to the establishment of the Israeli state at a time when, the authors assert, Palestinians were not heavily engaged with cinema.  During this period, theater, which tended to push an agenda of Arab nationalism and opposition to Zionism, attained more success than film.  Occurring in the wake of the Nakba, the second period (1948-67) is characterized as “The Epoch of Silence,” as Palestinian filmmakers suffered from a lack of funding and a general sense of disorder and displacement that shut out the possibility for the creation of a full-fledged film industry.  It was not until the third period (1967-82) that there came a resurgence of Palestinian film.  In this period, Palestinian films were largely funded and produced by resistance organizations such as the Palestinian Liberation Organization (PLO), and they were created specifically in service of the liberation movement.  Films made in this period documented resistance against the Israeli state, with the explicit aim of educating Palestinians and engendering a sense of nationalism, pride and unity among this diverse population.  Gertz and Khleifi explain that fourth period films (1980-the present) emerged on the heels of this era, often with foreign financing, to simultaneously deconstruct this Palestinian identity and symbolically challenge the totality of Israeli control.  These films have been intended as much for the outside world as they have been for Palestinian audiences, but nevertheless continue to serve the very political purpose of earlier Palestinian cinema.  Against this historical backdrop, the authors go on to offer short biographies of the major fourth period directors.  All of this information serves as important background for understanding the big shifts in Palestinian film and helps establish a basis for the subsequent analysis of third and fourth period films.

In Chapter 2, the authors talk in detail about third period cinema, in which, employing the aesthetics of documentary filmmaking, the principal aim of directors was to encourage a unified Palestinian identity and to solidify the narrative of displacement that began with the trauma of the Nakba in 1948.  In these films, the individual was symbolic of the nation and the portrayal of particular localized events and liberation struggles, whatever their actual sites, suggested a universal sense of place and implied “a setting for one collective Palestinian fate” (p. 62).  These films refer to the trauma of displacement without necessarily reconstructing a specific history of that loss, and it is in this way that they create the “shared historical memory, founded on collective trauma” (p. 61) necessary for organizations like the PLO to sustain a liberation movement.  Here the authors analyze the manipulation of time as well, demonstrating that in these films the present embodies past trauma and the future is merely a vision for the pre-trauma homeland.  They compare this construction of place and time with the films of Michel Khleifi and others in the fourth period, whose work “replace[s] the suffering and destruction, as the subject of the traumatic story, with the lost land, the place” (p. 71).

It is in this context that Gertz and Khleifi dedicate the next five chapters, the bulk of the book, to a detailed analysis of the themes of home and place, borders and barriers, and memory and time as they are employed in fourth period films.  These chapters are organized loosely around the contributions of individual directors and center on analyses of a selection of the most influential fourth period films.  They begin with Michel Khleifi, whose films about Palestinian identity in exile evoke a (lost) idyllic, pre-traumatic era past, a pastoral space that suggests the possibility for a future homeland.  However, Khleifi’s work also uses space and place to examine the everyday of present Palestinian life, drawing on the details of his characters’ daily existence in order to explore the diversity of Palestinian identity and ultimately piece together out of these fragments a sense of unity around the Palestinian nation.  The authors deconstruct the meaning of home as a place of both imprisonment and hope in Khleifi’s films, and they describe his use of cinematic techniques to reclaim the space that the Israelis have occupied, for instance, in Wedding in Galilee using a range of shots whose varying distances challenge the Israelis’ mapping of the land.

Using Khleifi as a basis for comparison, the authors move on to a discussion of the films of Rashid Masharawi, Ali Nassar, Elia Suleiman, and a smattering of other fourth period directors.  Highlighted in these chapters are the limitations of space, the constraints of borders, and the role of memory as they appear in the films of the late 1980s, the 1990s, and the early 2000s.  These directors, the authors explain, have built upon the legacy of Michel Khleifi by focusing on quotidian life, “forming through it a personal memory based on testimonies, individual histories, and interviews” (p. 191).  As such, their films have endeavored to represent the diversity in Palestinian society while still portraying the collective experience of trauma that all Palestinians share.

On the whole, this volume offers an insightful read into Palestinian films and draws an important link between art and politics in Palestinian society.  Unfortunately, it also suffers from poor translation, leaving the reader with glaring errors (for instance, the title of Camus’ The Stranger is mistranslated as The Outsider), awkward syntax, and clumsily communicated ideas.  Further, in the beginning of the book, the authors briefly mention that Palestinian and other Arab audiences originally aimed a strong critique at Michel Khleifi and Elia Suleiman for their ostensibly sympathetic attitude towards Zionism, however, this critique is glossed over and unresolved even in the authors’ in-depth analysis of the two directors’ films.  Finally, while the authors’ analysis of individual films is generally nuanced and specific, it becomes repetitive when the same conclusions seem to be drawn from chapter to chapter, blurring the distinctions the authors claim to make between the various directors.

Sonia M. Rosen is a Ph.D candidate at the University of Pennsylvania Graduate School of Education.