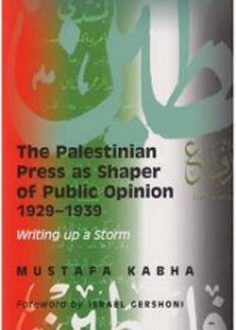 BOOK REVIEW | The Palestinian Press as Shaper of Public Opinion, 1929-1939: Writing Up a Storm

The past decade has witnessed a flurry of academic writings that detail the efflorescence of the Arabic press in the first half of the twentieth century. Drawing on the great wealth of newspapers, journals, and popular magazines that appeared to sate the appetites of a rapidly-growing readership, these studies have endeavored to track the movement of ideas between the printed word and the public imagination. In many cases, such analyses have reconstructed the heady debates of the inter-war era—about the goals of Arab nationalism, the implications of political developments in Europe, or the threats posed by Zionist ambitions—by reading between the pages of competing publications, with the resulting studies enabling us to trace the ideological contours of the period in ever-finer detail. Unfortunately, the precision of the best such studies at the level of cultural production has often served to point out the difficulties involved in evaluating media consumption.

Mustapha Kabha’s new work The Palestinian Press as Shaper of Public Opinion, 1929-1939: Writing Up a Storm proposes to tackle this formidable problem head-on and thereby chart the influence of Arabic news media on the evolution of the Palestinian National Movement in the tumultuous years that culminated in the Revolt of 1936-39. In his preface, Kabha promises that “the ability of the journalist of the time to shape public opinion or the consciousness of the masses, is examined through journalistic language, rhetoric, slogans, photographs and cartoons; [sic] while reflection of these methods and their effect on the readers is examined through readers’ responses to the messages conveyed in the newspaper by means of letters to the editor, number of subscriptions, advertisements and notices”(x). A work that takes such a systematic and organized account of these most basic gauges of reader response would be a valuable contribution to a general understanding of media influence and the sclerotic state of audience research in the Arab world while offering a more specific account of political developments in those most tumultuous years of the Palestine Mandate.

Sadly, Kabha’s work falls well short of its considerable promise. The book lacks a coherent argument beyond the vague suggestion that the influence of the Arab press increased steadily until key papers assumed an important role in advocating and coordinating various modes of activism during the Great Strike and the Revolt. Key arguments are left to the realm of assumption and probability, and these analytic shortcomings are most glaring in the very areas where Kabha might have made valuable contributions to his field. After some rather preliminary comments about the variety of reading habits in urban and rural settings, he provides scant evidence about the reception of published ideas by the reading public. Early in the first chapter, he acknowledges that readers’ letters can be an unreliable source for analysis since several papers made a habit of drafting such responses to support their positions, and in later chapters Kabha all but abandons his attention to such correspondence. He relies mostly on subscription figures as a measure of public enthusiasm, but the correlation is approximate at best and spurious at worst. Where he does attempt to connect trends in the press with the broader movements of popular opinion, Kabha seems to waver between characterizing the papers on the one hand as reflections of prevailing ideas and arguing on the other that they were in fact the primary motor propelling those ideas. There would be nothing wrong with an argument that comfortably acknowledged both possibilities, and indeed Kabha’s mentor Israel Gershoni has written forcefully about the development of Egyptian popular media in terms of a “feedback loop” driven at once by the curiosities and convictions of a growing student sector. Kabha offers no such framework to get out of teleological arguments he finds support for in the masses of data presented.

Whatever the disappointments of Kabha’s analysis, they are nothing when compared to the infuriatingly and unforgivably sloppy editing provided by the publisher Vallentine Mitchell. For those readers willing to brook the constant irritation of typos and misspellings, however, the book is not without its merits. Kabha may not always demonstrate clear causal links between press campaigns and the “shape” of public opinion, but his treatment of the relationships between competing papers and of the tensions between the press and the various political forces that struggled over the future of the Palestine Mandate are meticulous and incisive, and offer valuable new insights into this historical period. His narrative is strongest in the passages where he lays out all the conflicting pressures that were brought to bear on the editorial decisions of a given paper and explores the political economy of the industry. His willingness to consider newspapers as businesses with financial needs, a departure from many studies in Arab media that focus on politics to the exclusion of economics, adds texture and depth to his treatments of the period’s major ideological debates. Those debates themselves are presented in an almost obsessively detailed fashion. For each issue he considers, Kabha catalogues the positions of all the major publications, and from this systematic exercise he produces subtle portraits of key journalistic figures as well as more general characterizations of the various papers.

The comprehensive nature of Kabha’s work will likely make it a useful reference for anyone interested in the history of the Palestinian media. Readers who lack a solid foundation in the history of Mandate, however, may find the book difficult to navigate, as Kabha seems to presume an audience well versed in the context for his work.