Home / Arts & Entertainment / Creative Insurgency and the Celebrity President: Politics and Popular Culture from the Arab Spring to the White House 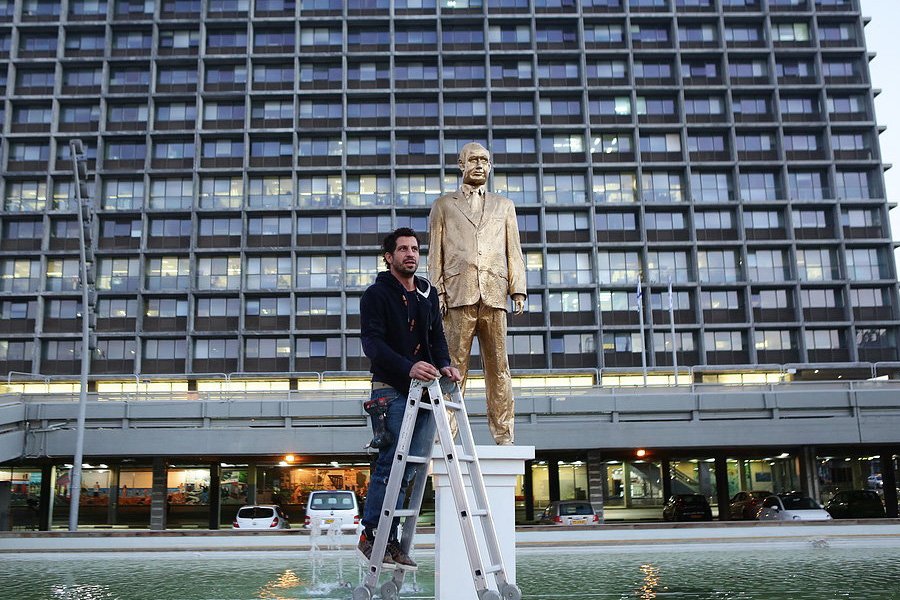 Creative Insurgency and the Celebrity President: Politics and Popular Culture from the Arab Spring to the White House

On Tuesday, December 6, 2016, a strange sight appeared on Rabin Square in Tel Aviv. Close to city hall, passersby saw a four-meter high gilded statue of Prime Minister Benjamin Netanyahu, in a suit, legs firmly planted on a long white plinth, hands hanging by his body. Some onlookers snapped selfies, others took old-fashioned pictures; at least one bowed mischievously to the imposing effigy of the country’s longest serving prime minister. Debates erupted: was the piece of guerilla art censure or homage?

Controversy quickly ensued. Itay Zalait, a sculptor, told the media that he erected the statue to “test the limits of free expression” in the country. But culture minister Miri Regev, a friend of the prime minister, retorted on Facebook that the effigy was “an expression of hatred towards Netanyahu.” When local authorities summoned Zalait to remove his public art and threatened a fine if he demurred, the sculptor doubled down on his subversive act, inviting people to help him “topple Netanyahu” from his pedestal—which they did. Photographs show the statue level on the ground, people standing over it.

The fallen sculpture recalls iconic images of toppled strongmen, most recently from the Arab uprisings. Big statues in public spaces are emblems of autocracy. This goes back to medieval times, when the body of the king symbolized the body of the realm, biology signifying politics.[i] Effigies of the president in squares, gardens, and parks were ubiquitous reminders that the leader’s body was the nation’s. But over-the-top effigies of the strongman signal political repression as much as joyful take-downs of  fallen leaders’ statues bespeak emancipation. Just like Mubarak’s long-standing “Laughing Cow” nickname captured some of Egypt’s longest-serving president physical and political characteristics,[ii] so has the moniker “King Bibi” afflicted Israel’s longest serving prime minister for years, inspired by “his reputed imperial tendencies, his political gifts and his taste for fine living,” as a Guardian correspondent put it.[iii]

If the “King Bibi” statue itself recalls monarchical body politics, the color of the sculpture brings to mind another strongman in the making. In the aftermath of the most unusual presidential campaign in United States history, gold has come to be associated with the new president-elect. It is true that Donald Trump’s body—his weird hairdo, the size of his hands, his corpulence—inspired jest and contest during the 2016 presidential campaign. Who can forget that moment, in the Republican primary, when Marco Rubio impugned Trump’s manhood, and Trump retorted with a zany assertion of his virility?

Besides, pictures of his Trump Tower penthouse show that in terms of gilded opulence, Louis XIV had nothing on the real-estate magnate-cum-reality television star poised to be president of the United States. Indeed, the large, golden “T,” “R,” “U,” “M,” “P” letters towering on top of buildings owned or franchised by “The Donald” can be understood as the president-elect’s version of regal effigy-making. It would be surreal to imagine five gigantic golden letters on the roof of the White House, if not for the fact that stranger things have happened in the campaign.

In The Naked Blogger of Cairo, I develop the notion of “creative insurgency” to grasp the artful and subversive tactics of resistance to strongmen developed by activists in Egypt, Syria, Tunisia, and elsewhere.[iv] Creative insurgency and autocratic practices feed each other. Just like repression fuels dissent, so does the excessive glorification of the leader compel parody. Activists respond to despotism with ornate graffiti, and contest the autocrat with elaborate songs. Since the body of the leader is the most visible symbol and instrument of dictatorship, it is logical that creative insurgency focuses on that representation. Hence the jokes, songs, pictures, videos, and slogans that ridiculed Assad, Ben Ali, Mubarak, and others. With the “King Bibi” statue, Zalait staged a creative insurgency in the heart of Tel Aviv. In the long interregnum between the late 2016 election and the early 2017 inauguration, late night comedians in America skewer the venality and buffoonery of power every night after the news.

Like many populist strongmen before them, Netanyahu and Trump’s blustery personalities, regal lifestyle, and hardball politics, invite ridicule. Zalait’s guerilla art and Trump’s robust embroilment with comedians who dared satirize him in the same week as the King Bibi statue appeared, reflect how politicized pop culture has become. However faint, the echo of the Arab Spring, when memes, videos, and songs circulated on social and broadcast media like wildfire, reverberates in political satire and subversive performances worldwide.

Acts of creative insurgency often stem from and publicize broader cultural struggles. The Israeli government and progressive artists have been at loggerheads over issues of creative freedom, demands of allegiance to the state, and funding of non-governmental organizations. The “King Bibi” stunt made these tensions visible. In the United States, simmering social tensions exploded to the surface during the 2016 presidential campaign, and now late night comedy is both rebuke to hatred and consolation for the afflicted. In the Arab world, the long tail of creative insurgency can be glimpsed in an arts renaissance and in daily acts of micro-rebellion.

The contemporary media environment encourages permanent rhetorical warring. In the United States, Trump took umbrage at a Saturday Night Live skit parodying him, and fired at the program in typical fashion, on Twitter: “‘Saturday Night Live’ – unwatchable! Totally biased, not funny and the Baldwin impersonation just can’t get any worse. Sad.” His comedic body double, the actor Alec Baldwin, retorted he would desist only if Trump were to release his tax return, something the president-elect refused to do during the campaign.

The scuffle showed that social media have become central to many a skirmish in the fraught overlaps of politics and popular culture. Skewered for his Twitter rants, Trump criticized SNL on Twitter, Baldwin replied on Twitter, and Trump, again, defended his “restrained” use of Twitter…on Twitter. Surprisingly, Trump’s Twitter feed did not bring up another parody, in which late night television comedian Seth Meyers compared Trump to a spoiled 16-year-old brat. Even Chinese media skewered the president-elect’s “Twitter diplomacy,” as his own wife says publicly how she tries, in vain, to restrain her husband’s Twitter use. As for the man himself, he describes his Twitter account like “the New York Times without the losses.”

But the significance of this story goes beyond social media. The 2016 US presidential election featured an unprecedented—and I do not use this word lightly—fusion of politics and popular culture .[v] After all, Trump, who himself appeared on SNL, has for years been a fixture on US cable television talk shows, and owns the Miss Universe Pageant. He was a popular culture figure for his starring role in the reality show The Apprentice. I remember seeing Trump flirting with a presidential run as early as 1994, when Jesse “the Body” Ventura won the gubernatorial election in Minnesota. After all, if the staid Minnesotans could elect a former World Wrestling Federation wrestler who wore purple  feather boa and who in a previous life was a Navy Seal, then anyone could become president of the United States.

The week was replete with indications that the fusion of entertainment and politics was proceeding apace into the new administration. On December 7, Trump tapped Linda McMahon, previously CEO of World Wrestling Entertainment, to join his cabinet as head of the Small Business Administration. On December 9, the president-elect announced he would continue on as executive producer of Celebrity Apprentice.[vi] Even as someone who has published two books on reality television and politics, I never imagined a US president-executive producer of a reality show.[vii]

With the global return of populism, it is likely that the politicization of media and popular culture will proceed briskly. As bigmouth politicians who say the unthinkable and do the unimaginable continue to bash and exploit ratings-driven media to gain and consolidate power, we will see more creative insurgents challenging them. As these leaders vilify dissenters, ignore norms, thump institutions, and seek an unmediated relation with their voters made possible by platforms like Twitter, they will peddle their own personae—really, their mystical bodies—as a solution to all problems.

In reaction, subversive stunts and guerilla art, jokes, and memes that target the body of the strongman will continue to spread via social media and other spaces of media and culture. Over and again, it will be clear that popular culture—from late night comedy to Twitter memes—is a political space, where social groups wage battles over moral values, government policies, and more broadly for defining the identity of nations and the good life.

Marwan M. Kraidy is the Anthony Shadid Chair in Global Media, Politics, and Culture and Director of the Center for Advanced Research in Global Communication (CARGC) at the Annenberg School for Communication, University of Pennsylvania. His latest book is The Naked Blogger of Cairo: Creative Insurgency in the Arab World (Harvard University Press, 2016). He can be reached @MKraidy.