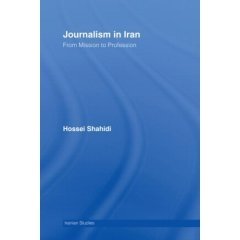 DUAL BOOK REVIEW | Journalism in Iran and Media; Culture and Society in Iran

English language analyses of Iran’s media often fall into one of two traps.  One is overstating the hegemony of the official Islamic Republic discourse and the censorship, or worse, awaiting those who challenge it.  The other is focusing too narrowly on ’s significant but still minority counterculture – rock bands playing illicit basement gigs, plucky newspaper editors hiding their barbs in elaborate prose, student protest groups and dissident bloggers.  Writers struggling to reconcile the two currents often reach for worn clichés of enigmatic Iran, the Persian paradox.

Two new books will help academic and general audiences navigate between these two extremes by bringing social science perspectives to bear on the historical development and contemporary diversity of Iran’s media.  Since the 1979 revolution, ’s citizens, government and institutions have been at work creating and contesting new national media norms, and all the while debating the process in trade journals, scholarly works and editorial pages.  Hossein Shahidi’s Journalism in Iran and Mehdi Semati’s edited volume Media, Culture and Society in draw on these Persian sources to introduce English-speaking audiences to the debates and contests that continue to shape the country’s media.  Together, they advance the discussion beyond simplistic ‘reformist versus hardliner’ narratives by detailing ’s fast-changing and multifaceted media landscape and the forces that shaped it over the past thirty years.

Journalism in Iran tells the story of print journalism from the twilight of the Pahlavi monarchy, through the revolution, to the end of the Khatami presidency in 2005.  Although it includes broadcast and Internet media in its scope, the book spends most time on print, arguing it is the “only segment of Iranian media where independent journalism has had an opportunity to develop.” (1)  Shahidi describes late Pahlavi mechanisms of media control that operated by harmonizing the financial interests of journalists at national newspapers such as Kayhan and Ettela‘at with those of government and big business.  Editors regularly sat on the boards of and took salaries from state-affiliated companies, and vice-versa, with no regard for conflict of interest.  This alignment of regime and press made coercive censorship rarely necessary.

As the protests that would topple Mohammad Reza Shah gathered steam in 1978, these large papers played catch-up to word of mouth and cassette tapes circulated by hand.  The high circulation dailies hesitated to mention Khomeini or publish news of the demonstrations in the provinces.  But the big papers were soon swept up in the revolutionary fervor.  They began shortening Shananshah Ariamehr (Kings of Kings, Light of the Arians) to Shah and referring to Khomeini as Imam – a title that supported his claims to fuse spiritual and temporal power.  Shahidi draws on personal interviews, newspaper archives and trade journals to detail the subsequent ups and downs of the print press, from the proliferation of new titles early in the revolution to the media purges of 1979-1980 to the reformist moment following Khatami’s 1997 victory that quickly segued into a conservative clampdown.

Early on, Shahidi argues for economic self-sufficiency, i.e. the ability of a journalist to make a living outside of the state, as the main determinant of press independence.  Yet this argument is not sustained strongly throughout, and political, structural and ideological factors come to the fore at various points in the narrative.  Another difficulty with the ‘sustenance’ argument is that little information is cited about the relative incomes of journalists over the years or their personal circumstances; most of the book’s analysis occurs at the level of individual papers as institutions.

Complementing Shahidi’s focus on print journalism, Mehdi Semati’s Media, Culture and Society in Iran collects contemporary social scientific research from scholars working inside and outside Iran.  Its fourteen studies describe trends in media production and consumption, and illustrate how these play out in Iranian society.  Media is interpreted widely, covering print, broadcast, cinema and online formats, with particular attention to less-studied aspects such as print advertising.

The book’s presentation of media consumption research done in Iran in recent years is valuable for understanding current trends, and adds to growing baseline data for future work.  Kavous Seyed-Emami’s chapter uses survey data to track the relationships between political participation and media consumption, pointing to higher participation rates among newspaper readers and a growing population who see the Internet as the most trusted news source.

Readers following the Arab satellite scene will find a valuable point of comparison in Fardin Alikhah’s chapter on satellite television consumption habits in Iran.  His findings show a declining viewership for exile Persian language channels and rising popularity of entertainment programming on regional Arabic and Turkish satellite networks.  Combined with Babak Rahimi’s article on the rise of online political opposition inside , this chapter suggests that domestic Internet-based opposition is quickly overtaking exile broadcasting as the main vehicle for mobilizing dissent.

Amouzadeh and Tavangar’s insightful study of print advertisements during the Khatami presidency illustrates the rich linguistic and symbolic vocabularies found in contemporary Iranian media.  It demonstrates how ads for beauty and hygiene products use foreign phrases, mainly English and French, to position them in reference to Iranian notions of quality, prestige or style.  It also notes how advertisers strategically select words from regional languages including Mazandarani, Azeri and Kurdish to alternately activate local or national associations.

These two books represent a quantum leap forward in the quality and diversity of Iranian media studies available in English.  Semati’s presentation of research originally done in Persian and Shahidi’s mining of journalistic archives will be invaluable for researchers continuing where they left off and for readers seeking a more comprehensive and nuanced picture of Iran’s media.