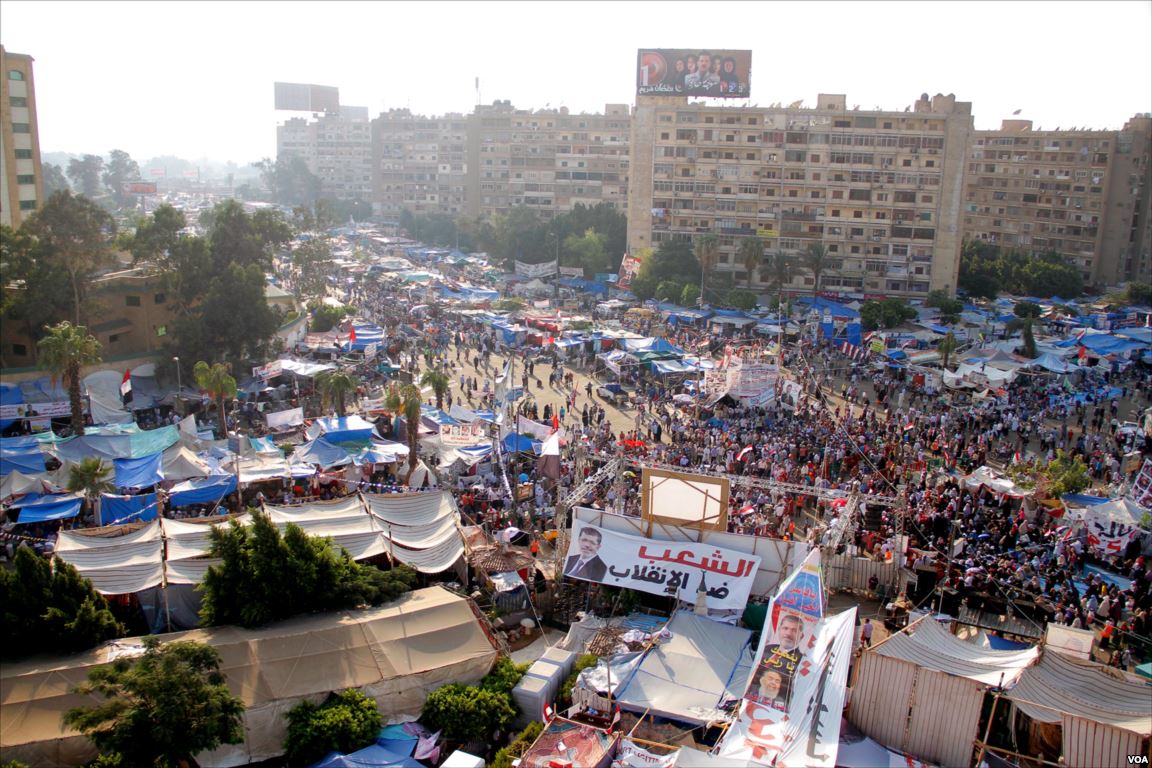 The Rabaa al-Adawiya Square was inhabited by Muslim Brotherhood supporters sleeping in tents for over a month. Photography by H. al-Rasam for VOA.

In today’s assembly al-Beltagy alleged that he was tortured by the head of the Interior Ministry’s Prisons Department, General Mohamed Al-Sohagy, as well as other high-ranking officials. He claimed that he was targeted because of a police report he filed against President Abdel Fattah al-Sisi earlier this year. According to al-Beltagy, his daughter was murdered during the violent dispersal three years ago for which he is now standing trial; he holds the President and other security officials responsible. Al-Beltagy did not withdraw his report despite the supposed intimidation.
The presiding judge, Hassan Farid, ordered prosecution to investigate the torture allegations. The charges include assembly, show of force, premeditated murder, destruction of property, and possession of unlicensed firearms.
The case dates back to August 2013 when security forces raided and broke up a sit-in organized by Muslim Brotherhood members at Rabaa al-Adawiya Square. Participants were rallying in support of Mohamed Morsi, who was ousted from the presidency by the military two months prior in response to mass protests against his rule. While figures vary, the Human Rights Watch estimated that around 1,000 people were killed during the violent dispersal. The same report claimed that the event “probably amounts to a crime against humanity.”
The controversial, state-affiliated National Council for Human Rights reported in March 2014 that the death toll amounted to 632 persons, among them eight security personnel.
State pressure on the Muslim Brotherhood has since remained constant. In December 2013 Egypt declared the group a terrorist organization. The government blames the Brotherhood for the wave of violent militancy targeting security personnel since the removal of President Morsi from office. The Brotherhood denies the accusations.